The Miami Dolphins are preparing for their Week 13 matchup with the Buffalo Bills on Sunday at Hard Rock Stadium.

Mike McDaniel’s team has started off the 2022 season with a bang, beating two AFC opponents that some thought would be ahead of Miami at the end of the year in the Baltimore Ravens and New England Patriots. The offense had their coming-out party in Week 2, scoring 42 points from Tua Tagovailoa’s six touchdown passes.

One of the only teams that are feeling as good as the Dolphins is the Bills. Buffalo, led by potential MVP Josh Allen, has dominated the Los Angeles Rams and Tennessee Titans to open the season. With the way that their season ended last year, Sean McDermott’s group appears to be looking to exact their revenge on the rest of the league.

Not that they were going to, but these are the reasons that the Dolphins can’t take this week’s contest lightly.

While the Dolphins are leading the overall series 61-54-1, they’ve lost their last seven against Buffalo, and nine of their last 10 meetings. Miami is also 3-6 against the Bills at home since 2013.

Allen has thrown for more yards (1,980) and touchdowns (21) against Miami than any other team.

Buffalo has been dominant on both sides of the ball this year, as their rankings in points, yards and turnovers show.

Miami's pass protection might not be able to handle pass rush

The Dolphins lost right tackle Austin Jackson to an ankle injury in Week 1 that will cause him to miss this game. Greg Little, who played in Week 2, is expected to remain in Jackson’s spot, protecting Tagovailoa’s blind side.

However, left tackle Terron Armstead has missed the first two days of practice this week with a toe injury that he suffered in the season opener. While he played through it against Baltimore, it’s not clear whether or not he will play on Sunday.

To make matters worse, Buffalo’s defense, led by veteran edge rusher Von Miller, has been outstanding at getting after the quarterback. After two weeks, they have the second-highest pressure rate, second-most sacks and eighth-most quarterback pressures. And, that’s all being done despite having the second-lowest blitz percentage.

Stefon Diggs is elite, and he's not Buffalo's only talented weapon.

Diggs has been one of the best wide receivers in the NFL since his arrival in Buffalo, taking his game up a notch from his strong performances in Minnesota.

Heading into Week 3, Diggs is second in receptions (20), second in yards (270) and first in touchdowns (four). Considering cornerback Xavien Howard isn’t fully healthy and Miami has used Nik Needham and undrafted Rookie Kader Kohou opposite him, Diggs may be licking his lips.

However, he’s not the only weapon the Dolphins will have to worry about. Gabriel Davis has turned into a strong second option and having Isaiah McKenzie and Jamison Crowder as third and fourth receivers is a luxury that not a lot of teams have.

Add in Dawson Knox at tight end and it’s not hard to imagine defensive coordinator Josh Boyer is struggling to sleep this week. 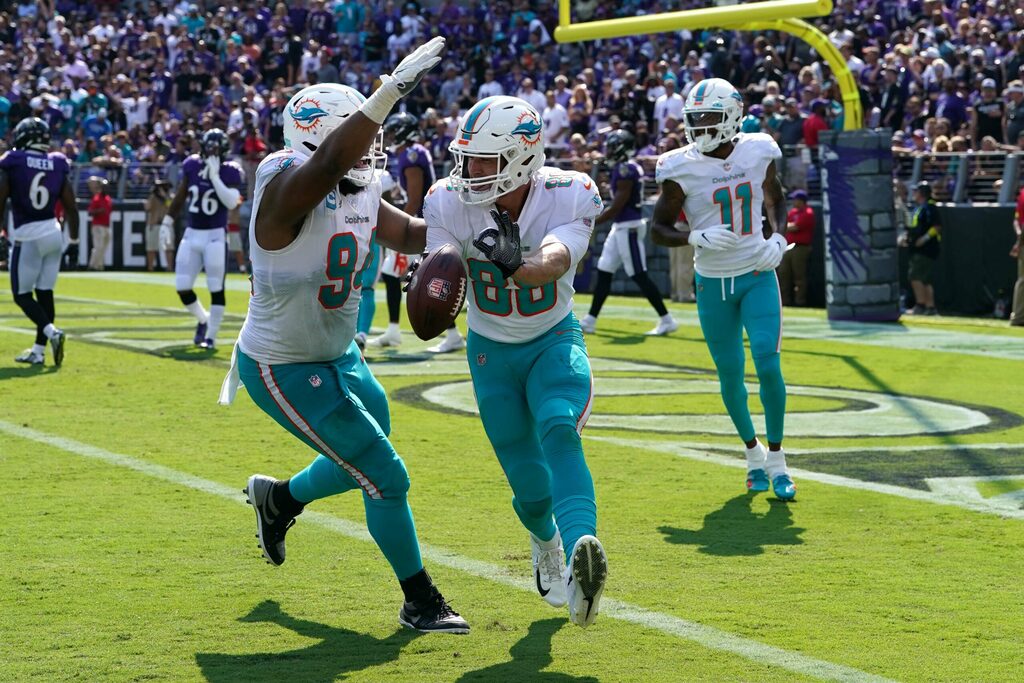 How the Dolphins can beat the Bills in Week 3
Keys to a Dolphins victory.

USA Today Sports Media Group
From analysis to the latest developments in health, read the most diverse news in one place.
Notes ahead of Dolphins’ important Week 3 matchup with the Bills

Will you be able to watch this week's game?

A look at reasons for optimism and concern for the Titans in Week 3.

USA Today Sports Media Group
One place to find news on any topic, from hundreds of sites.
Dolphins final Week 3 injury report: 4 questionable, 2 out vs. Bills

Some key contributors could be game-time decisions.