30 years ago, David Fincher made the darkest Alien movie ever

Alien 3 has long been the neglected Alien stepchild. On the occasion of its 30th anniversary, it’s high time this grim entry in the massive franchise was given a bit of a makeover by delving into its many guilty sci-fi pleasures.

It's tough being the unloved, unwatched, and unwanted third film, teased about your stylistic square-root symbol and chastised until the end of time for being a nihilistic, lice-ridden chapter of the saga that shaved Ellen Ripley's head and then killed her off. If that wasn't enough sorrow, they suffocated Aliens’ Newt and impaled poor Hicks for good measure.

The result is an underrated disaster and a classic case of studio interference that’s still seen in today’s blockbuster Hollywood movies. Its young director, the now acclaimed David Fincher (Se7en, Fight Club, The Social Network), disowned Alien 3 upon completion and will rarely talk about it in interviews.

Starring Sigourney Weaver, Charles Dance, and Charles S. Dutton, Alien 3 was released on May 22, 1992 over the Memorial Day weekend. Forced to compete against Lethal Weapon 3, it did mediocre business and barely made back its budget domestically. Internationally it performed better, earning twice as much as its American run and finishing up with a $104 million take.

After the overwhelming critical and commercial success of James Cameron's Aliens, you'd think directors would have been clamoring to direct the next installment, but that wasn't the case. Renny Harlin (Cliffhanger, Die Hard 2) was first linked to the project, but bowed out. Ridley Scott, who helmed 1979’s original Alien, wasn’t interested in doing a sequel and was off on other projects like Thelma and Louise, and James Cameron was looking towards True Lies and onto Titanic.

Even Sigourney Weaver had little interest in a third film and reluctantly agreed to star near the end of pre-production, but only if her character was given a proper death scene. 20th Century Fox had let the film rot on the vine for years as dozens of ideas were tossed around, including a take with xenomorphs dropping in on Earth, a version by screenwriter David Twohy aboard an orbiting prison, and even a brilliantly political, Hicks-centric draft delivered by legendary cyberpunk author William Gibson.

But the project didn’t really sprout until a team of writers and producers pitched a techno-medieval setting aboard a wooden biosphere occupied by a group of Luddite monks. Concept art was drawn up, expensive sets were built, script pages were rewritten on the fly, and studio tensions mounted.

Filming began in January 1991 in London with a half-finished screenplay by David Giler and Walter Hill, and much derision between a cast, producers, and director besieged by 16-hour workdays and an out-of-control budget of nearly $55 million. Slowly, the script was reworked. The monastic order was replaced by born-again convicts. The splintery satellite became a prison planet. The glassworks was replaced by a leadworks.

There were some positives to the process. Alien 3’s special effects were nominated for an Academy Award that year, while cinematography was handled by legendary British filmmaker Alex Thomson, who brought us the sumptuous photography in John Boorman's Arthurian epic, Excalibur, and Ridley Scott's dark fairytale, Legend. Thomson's work displayed Fincher's judicious use of color, saturated in hues of dark brown, faded golds, and rust-red.

The story picks up directly after the finale of Aliens, with Ellen Ripley, Hicks, Newt, and the torn-apart android Bishop aboard a shuttlecraft ejected from the Sulaco. They crash on a battered world called Fiorina "Fury" 161, home to one of Weyland-Yutani’s old mineral ore refineries that served as a maximum security labor camp.

Newt and Hicks are immediately written off as victims of the rough landing, while the surviving stars meet a congregation of male convicts who chose to stay after the penitentiary was shut down to live a devout fundamentalist life.

Inside the prison, Ripley finds a kindred soul in Dance's disgraced Dr. Clemens, and she enjoys some human connection after the hell the first two movies put her through. A Weyland-Yutani rescue team is on its way, but a nasty xenomorph has hatched from a flea-bitten Rottweiler and is now scampering around the installation and snacking on convicts. Ripley reactivates the disheveled android Bishop and learns there was an alien inside their escape pod all along. She later discovers she's been impregnated with an embryonic queen, illustrated by the homicidal monster declining to kill her once it gets a whiff of the royal baby she's carrying.

The greedy Weyland-Yutani considers Ripley to be a high-priority asset and want her kept safe. This all leads to a plan to lure the xenomorph into a lead mold and douse it with molten metal. When the backup arrives, they come with heavy firepower and a surprise squad leader in a man claiming to be the real Bishop. But after that proves to be just another lie, Ripley makes a sacrificial leap into the flames to prevent the company from snatching the creature inside her.

Charles Dutton is the standout performer in Alien 3, especially during his moving speech at the funeral for Hicks and Newt, which is intercut with the painful birth of the alien in the slaughterhouse room. Dutton's Dillon is the bedrock of the story, and it's his unfolding redemption for his past sins, as much as Ripley's salvation and ultimate sacrifice, that gives the movie some heart. His final speech to rally the convicts is one of the best in the franchise, and if there’s one thing to take from this third Alien movie it’s his transcendent work in a grueling, troubled production.

Another bright spot is Alien 3’s penetrating symphonic score by Academy Award-winning composer Elliot Goldenthal (Batman Forever, Heat). One of his first Hollywood soundtracks, it has a haunting, avant-garde quality that rises at times to a comforting crescendo, then darts in other directions to provide contemplative moments of unsettling menace.

The real crime is the shelving of the Alien 3 Special Edition, available only on home video. An assembly cut of deleted scenes and footage presented to Fox in late 1991 before the executives took a hatchet to Fincher's version, it runs 31 minutes longer than the theatrical release and immediately establishes a different tone. We're offered moody shots of the abandoned docking cranes and desolate shoreline as Charles Dance takes a silent evening stroll and spies the half-submerged escape pod out in the ocean.

Ripley is discovered unconscious, washed up on the sand and slick with oil. The shot composition is more artfully arranged and paced slower, with a heightened emotional impact forged by the evocative imagery. For a director with only a few music videos and commercials under his belt, it made for an impressive debut.

Another scene has inmates hauling in a dead ox and hanging it up to be chopped into stew, only to find a Facehugger inside. This is a major improvement over a mangy dog being the source of the alien, with gorgeous cinematography showcased in the abattoir. Seeing the xenomorph gallop away from the bloody livestock framed by piercing shafts of blue light is particularly chilling.

The assembly cut is proof that Alien 3 spawned a great director, and for that we’re thankful for its filth and foulness. Seen as part of the whole Alien franchise it's a dirty gem, a film that gets a lot of crap but can still be loved, warts and all. 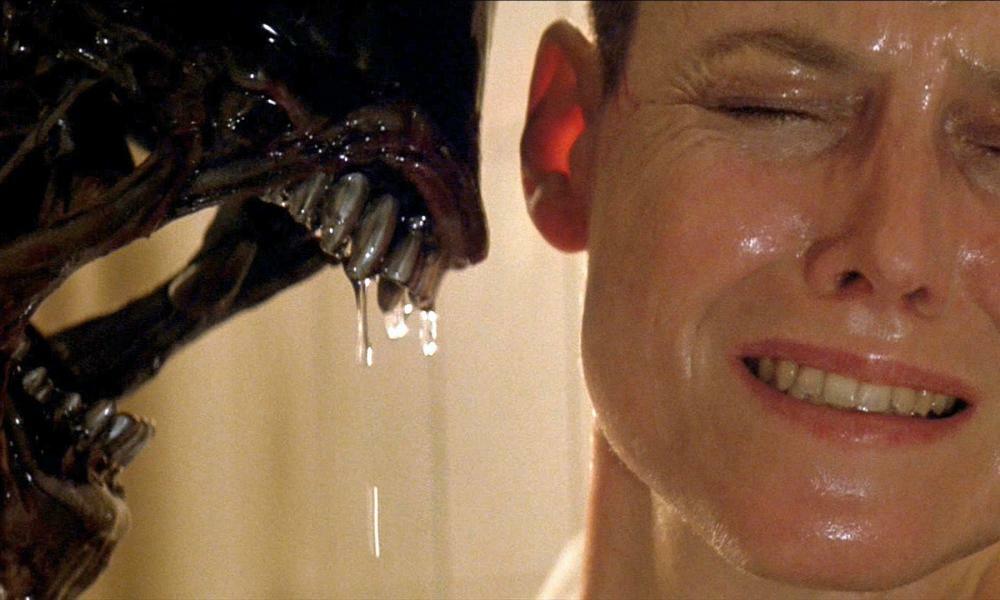 Alien 3 at 30: David Fincher’s divisive threequel remains a fascinating failure
The first-time film-maker memorably disowned his grim and grimy Alien movie but a devoted fanbase insists it’s better than its…

The Guardian - US
One subscription that gives you access to news from hundreds of sites
5 years ago, Ryan Reynolds made the best 'Alien' rip-off ever