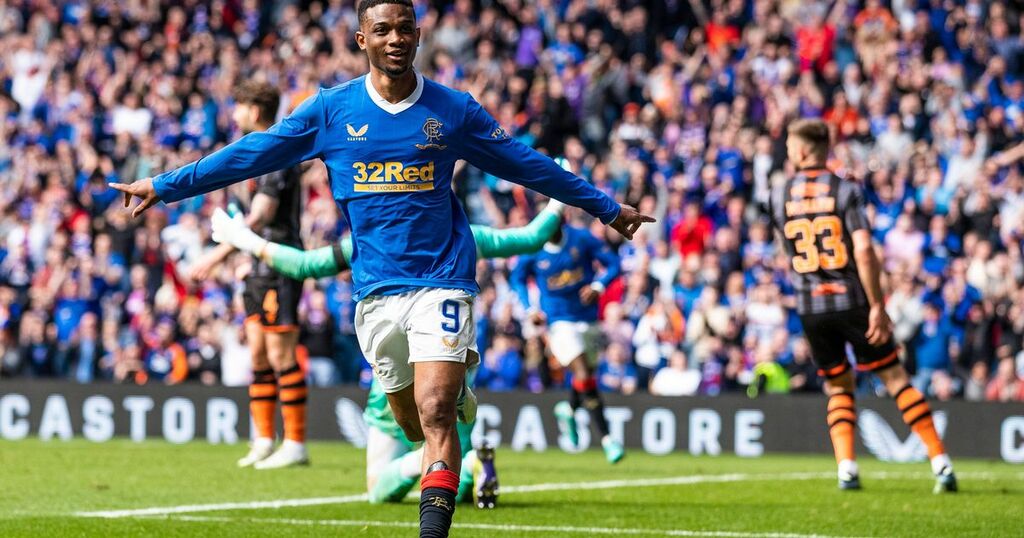 Rangers pummelled their sparring partner as they continued their warm up for their European title challenge on the night they lost their domestic crown.

But they'll be hoping not to have suffered any costly blows against robust Ross County in the process.

Giovanni van Bronckhorst’s men secured the win against Ross County as they kept their focus just seven days before the Seville showdown against Eintracht Frankfurt.

Scott Wright’s sixth of the season and an 18th for James Tavernier - again from the penalty spot - had the hosts in cruise control at the break.

But the Staggies, who had offered very little, pulled one back through substitute Jordan White before substitutes Fashion Sakala and Amad Diallo got in on the scoring act.

Wright lost possession for County's goal and then later went off with an ice pack with Borna Barisic also looking like he might have been struggling when he stayed in at the break.

Van Bronckhorst resisted the temptation to leave key men out but youngster Alex Lowry was handed the start fans have been desperate to see.

The game might have been meaningless in terms of the league for the home side but the visitors were chasing a Euro place and surprisingly top scorer Regan Charles-Cook, albeit he hasn’t found the net since February, was left on the bench.

Gers were on it right from the off with Joe Aribo, back after being forced off with a head knock at the weekend, dragging a shot just wide.

Man of the moment John Lundstram then looked certain to open the scoring but was denied by Ross Laidlaw from close close range.

The Staggies offered next to nothing and were lucky to hold out as long as they did before the deadlock was broken after just 12 minutes.

Borna Barisic floated in a corner and Connor Goldson glanced a header goalwards and Wright was there to turn it in.

The Ibrox side doubled their lead before the half hour with captain Tavernier winning and then converting from 12 yards.

He was played in by Wright and Alex Iacovitti was too late with his challenge as he took the full bak out and Tavernier made no mistake from the spot.

Connor Goldson almost added a third on the stroke of half time but his effort skimmed off the outside of the post.

Amad Diallo and Leon Balogun were introduced at the break as Joe Aribo and Borna Barisic were withdrawn.

And Balogun was almost on the scoresheet early in the second half when his header from Tavernier’s free kick came back off the post.

Wright was lucky not to suffer a more serious injury when Jake Vokins committed a crude challenge on the Gers scorer and the same for substitute for Fashion Sakala after another shocker from Keith Watson.

County pulled one back in style but it was poor play from Wright who conceded possession to Charles-Cook, on as a sub, and he fed White who scored a brilliant goal.

But Sakala made sure there was no late wobble as he got on the end of Tavernier's corner to head home before fellow sub Diallo converted Calvin Bassey's cross to complete the rout.

Gers are on their way

This was the final home game of what has ultimately been a disappointing league campaign but Rangers fans chanted about being on their way to Seville.

The Europa League Final has ensured that the fans are in good spirits and they were again in Spanish party mode.

Giovanni van Bronckhorst will likely give his big guns a rest when they face Hearts in the final game on Saturday in a Scottish Cup dress rehearsal.

But for the fans it’s not a trip across the M8 that’s getting them excited as the journey to the Andalusian capital starts this weekend for many.

It was only a question of when Rangers would officially lose their Scottish Premiership crown and this was the night it finally happened in the penultimate league fixture with Celtic's draw at Tannadice enough.

That scenario didn’t seem likely in the early part of the season and in any other circumstances there would be a major inquest.

But the fact the club will contest a European final next week means there was a bit of a shrug of the shoulders.

If lifting the Europa League - and for some even just reaching the final - is the price to pay for giving up the title then it’s one many fans would have accepted before a ball was kicked.

However, in isolation the Scottish Premiership campaign has been a major disappointment after the euphoria of last season.

Ross County were hugely disappointing considering what was at stake for the Highlanders as they chase a European spot, although they picked up in the second half when Gers took their foot off their gas.

And their frustration in a poor performance resulted in some challenges that could have resulted in more serious injuries.

Jake Vokins and Keith Watson were both guilty of tackles that Scott Wright and Fashion Sakala were lucky to escape unhurt from.

Giovanni van Bronckhorst’s side didn’t turn their gaze towards Seville a week early as they were thoroughly professional.

But if the Light Blues had taken their eye off the ball then it’s unlikely Malky Mackay’s men would have had it in them to take advantage.

They should have arrived in Govan looking to put Gers under pressure considering their minds might have been on the Europa League Final.

The league’s top scorer Regan Charles-Cook was even left on the bench in a surprise move. Regardless of what happened here it’s been an outstanding season for the Staggies but their fans would have expected them to have more of a go.