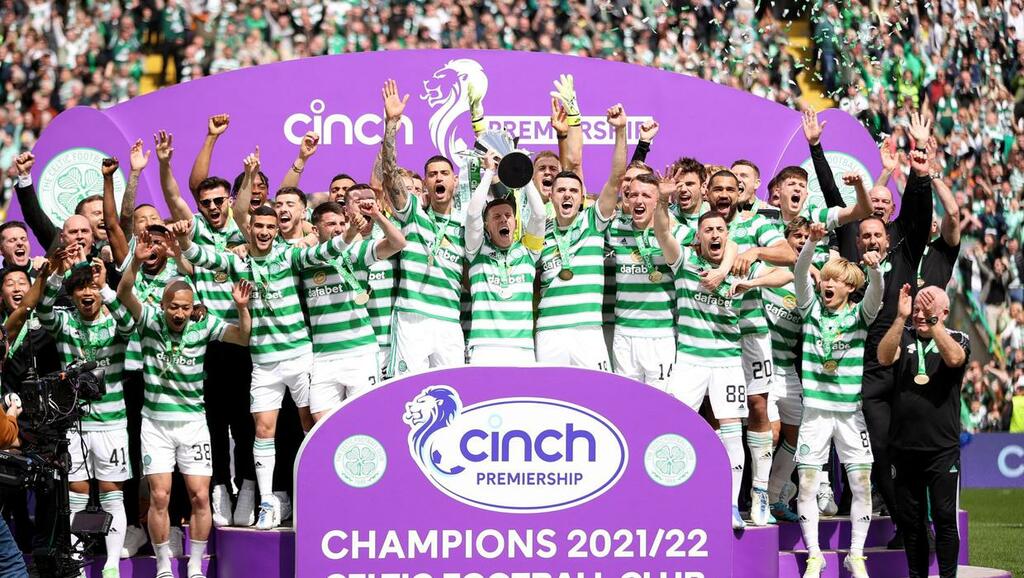 Ange Postecoglou's Premiership champions round off a brilliant campaign at home to Motherwell on Saturday.

The Japanese striker took his tally for the season to 20 goals with a couple in the first-half as Motherwell were mauled.

Ange Postecoglou wanted his team to finish the season strongly and they responded in magnificent fashion with a flying Scottish Premiership finale.

On the day Celtic said an emotional goodbye to Tom Rogic and Nir Bitton, David Turnbull, Jota and sub Giorgos Giakoumakis with another two were also on target.

It was a disappointing end to the term for Graham Alexander’s side, but a European place was in the bag before kick-off and there was little they could have done to halt the home charge.

It was a brilliant performance from Postecoglou’s side as they capped a magnificent title-winning sequence with a 32rd match unbeaten.

Given what they have achieved this term, it was no shock that Celtic fired on full power.

Parkhead was in party mode with the trophy about to be handed over and the team did not disappoint the fans in the 90 minutes which preceded the presentation.

There were standing ovations for Rogic and Bitton in the opening half hour along with Kyogo’s first.

Defender Victor Niernnold made a mess of dealing with a corner and the Asian marksman collected the scraps and fired a near-post strike beyond Liam Kelly.

Although the Steelemen had a couple of half sighters, the hosts retained control and Rogic almost gave the punters a goal to cherish after a lightning break.

Joe Hart’s outstanding long kick sent Jota clear and his cross into the area was knocked against a post by the Aussie.

Turnbull, though, was more accurate to double the lead. Pouncing on possession hunted, he sold Ricki Lamie a dummy at the edge of the box before crashing past Kelly.

Alexander’s first-half agony was not over as Kyogo made it three before the turnaround after superb set-up work by Anthony Ralston.

The right-back’s brilliant chipped through pass found the advancing Japanese and the striker’s first-time volley on the run was exquisite.

Celtic just wanted more and more and Jota made it four with a rifled finish after Daizen Maeda’s heavy touch from a Kyogo fell beautifully into his path.

Rogic came off in tears with Yosuke Ideguchi getting an outing and Motherwell must have wished the rest of the home team went with him as they stayed hungry for more.

Giakoumakis replaced Kyogo and was swiftly on the scoresheet with an overhead kick after a miscued clearance of a Jota cross.

Bitton was next to be struck by emotion when he replaced Callum McGregor before the captain led the group into the trophy celebrations.

It was a Celtic performance fitting for a special occasion and Giakoumakis tapped home his second from a Maeda knockdown in stoppage time to wrap the flag in glitter.

The Celtic manager had the title in the bag and he could easily have left out the majority of his top stars after a long season, but that’s not how he operates.

The boss knew 60,000 were turning up for a big day and his team was going to put on a show. The hosts gave the supporters a trophy day to recall with relish as they smashed the Steelmen.

LOOKING AT THE BIG PICTURE

It has not been a brilliant second-half to the season for Motherwell, but judgements have to be reserved for entire campaigns and the Steelmen have finished above some notable clubs and put themselves into European football next term. Say what you like about the standard of the sides outwith the big Glasgow two, but to finish where they have is more than acceptable on their budget.

Tom Rogic and Nir Bitton have been outstanding servants to Celtic and were given the type of send off they deserved. The Aussie started the game and the crowd stood to chant and applaud him in the 18th minute.

He almost rewarded them with a goal and was in bits as he left the stage. The Israeli was also celebrated as he warmed up as a sub and the pair of them left the way they started. As champions.

Ange Postecoglou's Premiership champions round off a brilliant campaign at home to Motherwell on Saturday.