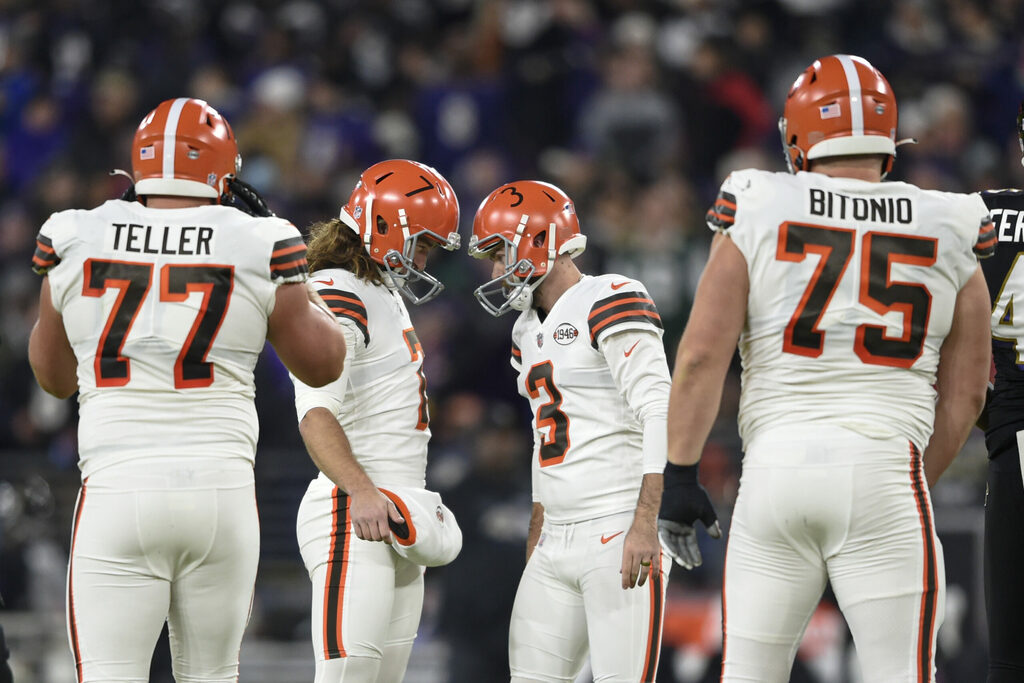 The Cleveland Browns have issues they need to shore up on their roster this offseason. With a myriad of free agents, a couple of big extensions possible and a team that underachieved compared to their goals, some change is coming for Cleveland in 2022.

One change that was discussed but has been put to bed twice is moving on from QB Baker Mayfield. NFL Network first reported that the team and Mayfield would continue into 2022 and GM Andrew Berry said the same thing in his season-ending press conference. Berry believes the quarterback is set for a bounce-back season.

One part of the team that didn’t bounce quite right this season was on special teams. The Browns struggled to find a consistent kick returner, replaced their punter and kicker due to COVID-19 and none of those positions are settled for the upcoming season.

During his time with the media, Berry didn’t rule out the team drafting a kicker:

I would consider anything. My reaction to that is not any hard and fast rule. It probably depends on the player, and it depends on other ways you can acquire talent at the position. No, I would not rule it out.

Obviously, the GM has no reason to give away his plans related to any position but kickers have become more and more valuable with the longer extra-point try in the NFL. Unfortunately, almost every team has struggled to find a consistent kicker for more than a couple of seasons. Justin Tucker is one of the few that can be relied on.

The 2022 draft class has a few kickers that could be drafted such as Cade York out of LSU or Will Reichard out of Alabama.

While kickers are not drafted regularly, only one was drafted in 2021, it is a position where Cleveland could decide to use a late pick to ensure they got the best possible player at the position. While Berry has done well late in the draft, with Donovan Peoples-Jones and Demetric Felton, finding a solid kicker has to be a priority this offseason. Perhaps the answer comes in the 2022 NFL draft.