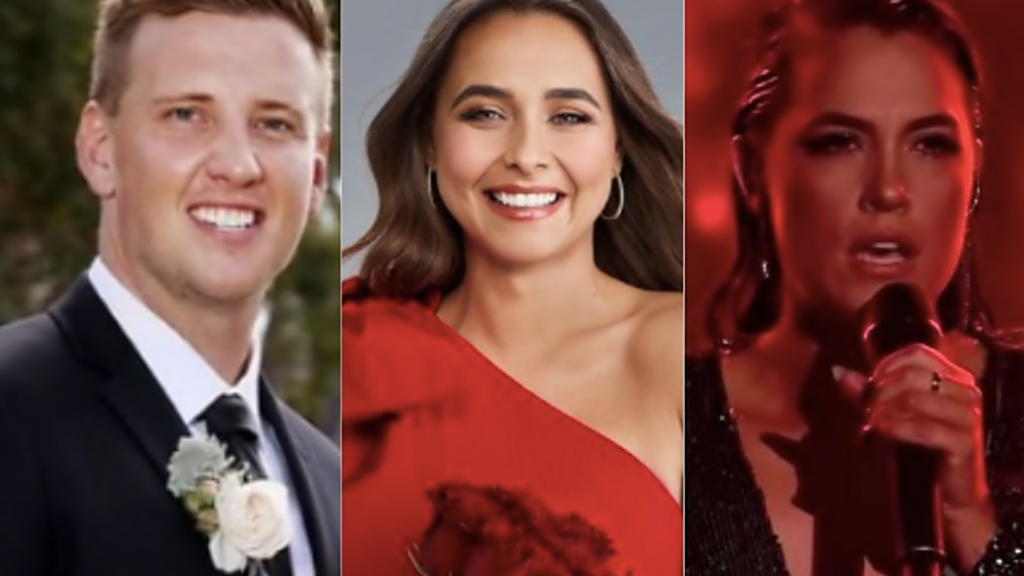 This year, we’ve seen a much-needed increase in bisexual representation on Australian reality TV, after years of churning out the same old BS storylines with the same old heterosexual (and almost exclusively cis) cast members.

And it’s not just the dating shows that are providing audiences with the representation we’ve been lacking for so long, as the current season of singing comp series The Voice features a proudly bisexual singer, Penelope Pettigrew.

Penelope, who realised she was bi at the age of 30 and describes herself as “the love child of a pop diva and drag queen,” told me that the absence of bisexual inclusion on-screen is “one of the reasons it took me so long to embrace my bisexuality.”

“When I was a teen, most of the queer representation in entertainment and sport was broadcast with either a blatant or subtle subtext of disapproval,” she said.

“I always found it sad that queer people weren’t celebrated or even at the bare minimum, accepted. It always upset and confused me.”

She added, “It’s widely known that queer people have had the immense pressure of needing to ‘play it straight’ if they wanted a career, especially in entertainment. Thankfully we’ve come a long way since then, but we still have quite a way to go in terms of ‘normalising’ queer people, especially when it comes to bisexuals, pansexuals, nonbinary and transgender people.”

Having already starred in not one, but two reality TV shows in the past, Brooke Blurton told us that biphobia, homophobia and hate in general is very much still present in Australia.

“I don’t think you’re ever prepared for negative attention,” Brooke told us in an interview following her Bachie announcement.

“I think I am so thick-skinned in the sense that I have had experience on being on The Bachelor and doing Bachelor in Paradise – I know that there are critics, I know that there is a small population of very conservative people, but I’ve said this in other interviews and I’ll still continue to say it – if it makes you feel uncomfortable to see two girls kissing or two guys kissing or whatever it is, I feel like it’s time for you to really reflect on what that means to you. If you don’t really accept it and you feel uncomfortable it’s really a reflection on you in some part, and you need to unpack that.

“That might sound savage, but I think it’s honest and I think people will be onboard with how we as a society are moving forward into a more accepting space. It shouldn’t even be a thing.”

I also spoke to Bree Mountain, the co-founder of award-winning LGBTQIA+ events organisation BiCONIC Events, who told me that bi voices are being left out of the conversation everywhere, not just on our screens.

“We don’t see ourselves represented in many places at the moment, not just reality TV,” she said. “In the last 20 years we’ve started to see a lot more gay and lesbian people on our screens and books but it’s taken longer for people to see and accept bisexual people.

“However, thanks to decades worth of advocacy from the bisexual community and bi+ individuals I think we are slowly starting to see things change!”

But unfortunately the damage has already been done as the severe lack of representation has had a serious impact on the bisexual community.

“Far too many bisexual people feel invisible and excluded which is shown by the horrible mental health stats amongst our community,” Mountain said.

“Bi+ folk have worse mental health stats than hetero, gay and lesbian folk, including really serious stats in relation to things like depression, anxiety and suicide. Lack of representation reinforces the horrible feelings so many of us feel and that can have some pretty serious implications.”

The announcement that Brooke Blurton had been cast as Australia’s first-ever Bachelorette was met with thunderous applause from punters and was a huge watershed moment for the bisexual community.

Unfortunately the same could not be said for Liam Cooper, who had to deal with disgusting displays of biphobia on the most recent season of MAFS.

Speaking to the So Dramatic! podcast, Liam expressed his disappointment at the way his sexuality was weaponised in a tokenistic way on the show.

“I was taken aback, it’s like, who reacts like that?” he said of his co-stars’ negative response to finding out he was bi. “Especially as I’m at my wedding, I’m here to get married, I’m not here to talk about that. Then I guess it hit me, like in this day and age people react like that. It’s a shame.”

Bree expressed that while she is “endlessly thankful to Liam, Brooke and Penelope for sharing their voices,” there’s still some serious fine-tuning needed to achieve respectful bi inclusion.

“The language used by the network leading up to [Brooke’s coming out] episode, phrases like, ‘dropping a bombshell’ and ‘shock revelation,’ made me feel like my identity is a much bigger deal than it really is,” she said.

“With Liam’s experience, honestly it just sounds horrible. I really feel for him. I mean, from the very beginning, there were shocked faces and laughter after his ‘coming out’ moment, which reinforce this feeling that we’re ‘not normal’. And the things Liam has shared about production since, along with the attitudes and actions from contestants after the show was aired, it’s pretty hard stuff to hear, let alone go through.”

While it sucks that both Brooke and Liam have had to put up with all the negative BS, Penelope says she’s living proof that seeing bi people on-screen has a hugely positive impact on viewers who are coming to terms with their sexuality.

“It makes me happy to know that youth are growing up with more visibility,” Penelope said. “When Brooke came out on The Bachelor, I wasn’t out yet so that was a big deal to me, I felt so validated! Especially because I was in a relationship that didn’t allow me to fully be myself. Seeing her come out and speak her truth and seeing people stand behind her in support, gave me courage to be myself.”

She continued, “Having bisexual representation on TV not only gives us the space and recognition we deserve as a community but it also opens up the conversation around bisexuality, to educate people and break down the stereotypes that have been placed on our community.

“There is a younger generation of bi people out there and it is important that they know they’re not alone, the feelings they have are completely normal and there is a community that they belong to. Also, visibility matters. It matters not only to the people who deserve to be seen and celebrated, but it also matters to help educate the people who don’t see us.”

So what can be done from here on out? Well, here’s an open letter from Bree…

“I want to see more media that represents bisexuality without sensationalising it and I would also love to see more people challenging the negative stereotypes out there. I mean, I would love to have seen other people at the table calling out those who laughed at Liam when he shared his bisexual identity and would like to see these conversations happening on all levels of society. If you hear someone in your circles saying horrible things about bisexuality, stand up for bisexual folk and call them out!

I’d also like to see more articles focusing on the positives of bisexual identity. We’ve been talking about the challenges faced by bisexual people but bisexuality is also pretty awesome! We now have bi+ community groups all around Australia and I’d love to see more people connected to them.

When I first got involved in building local bi community, we had someone reach out and say that had they not found this, they would have ended their life. If media platforms and networks are going to be speaking about bisexuality, it would be great to see them go that extra mile and include a link to local bisexual groups. So many bisexual people feel alone and seeing a link that connects you to your local bisexual community could be life changing.”

The Voice is currently airing on Seven and The Bachelorette kicks off soon on Ten.

BiCONIC is an award-winning LGBTQIA+ events organisation focused on creating inclusive events for the bi+ community, queer folk and allies.

This month you can catch them online for their Virtual Bi+ Visibility Day celebration on Friday 24th September, as part of the Australia wide Stand Bi Us Forum! Check out more of the forums incredible events at StandBiUs.com and be sure to give BiCONIC a follow at:

Matty Galea is the Senior Entertainment Editor at Pedestrian who also dabbles in woo-woo stuff like astrology and crystals and has been penning horoscopes since the start of his career. He also Tweets about pop culture and astrology and posts spicy content on Instagram.

The post 2021 Has Been The Year Of Bi Inclusion On Aussie Reality TV But We Still Have A Long Way To Go appeared first on Pedestrian TV.