$2 million worth of cattle reported stolen from NT station

By By Jack Price 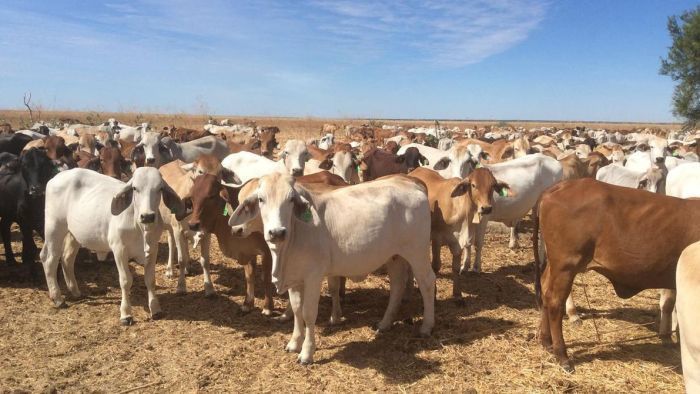 The alleged theft of around $2 million worth of cattle from a Northern Territory station has sparked renewed calls from pastoralists for the reinstatement of a stock squad.

More than 1,400 head of cattle have been reported stolen from Murranji Station, 700 kilometres south-east of Darwin near Daly Waters.

The theft is believed to have occurred over a number of months.

The Pickersgill family purchased the 447,500-hectare property in March, with 12,500 Brahman-cross cattle guaranteed as part of the sale.

But when the family completed an extensive bangtail muster of the entire property, stock numbers came up short.

"There's 1,456 branded cattle missing, and there are also the unbranded weaners that would've been on those cattle," Kevin Pickersgill said.

"There probably would have been 800 head of weaners that we're missing as well, so I'm thinking it's in the vicinity of $2 million worth of stock."

Mr Pickersgill believes the cattle theft started prior to the purchase of the property but it has continued since the station changed hands.

The family has offered a reward of up to $250,000 for information that assists with the police investigation.

"It's quite a large lump of money so if someone knows or has heard of anything, there's potential there for them to claim some of that reward."

Mr Pickersgill said he was not holding out hope of seeing many of the cattle again.

"There's every chance the majority of these cattle are long gone, or on a boat, or dead," he said.

Missing stock an issue across the NT

Station owners across the NT have long called for the reinstatement of a stock squad, which could investigate incidents of alleged cattle theft.

Dianne Martin from Mt Denison Station, 300 kilometres north-west of Alice Springs, believes those calls have become louder this year, as such incidents appear to have increased.

"Because of the strong cattle prices there's been a lot of moving of cattle, and there's a lot of cattle missing from stations."

Ms Martin said there was a "desperate need" for a stock squad, insisting that current systems of cattle identification and traceability were not enough to deter people from stealing stock.

"A squad could respond when people find animals with their tags changed, as well as randomly stopping trucks to check brands, earmarks and all the paperwork on the waybills," she said.

Earlier this year the Northern Territory Cattlemen's Association put a proposal to the NT Government for the establishment of a 16-person strong Livestock Ranger group, which would provide a specialist response to criminal allegations in the cattle industry.

The $5-million-a-year proposal has not been taken up by Government.