Yala (Thailand) (AFP) - At least fifteen people were killed in attacks by suspected Muslim militants in Thailand's violence-wracked south, an army spokesman said on Wednesday, the latest incident in the 15-year bloody insurgency.

Thailand's three southernmost provinces have been in the grip of a conflict that has killed more than 7,000 people, as Malay-Muslim militants fight for more autonomy from the Thai state.

The region is under martial law, heavily policed by the military and sometimes staffed with trained civilian volunteers, with residents and rights groups accusing them of heavy-handed tactics.

In the largest death toll in years, "twelve were killed at the scene, two more (died) at the hospital, and one died this morning," said Pramote, adding that five others were injured.

The attackers took M-16 rifles and shotguns from the checkpoints, he said."These acts were by militants."

Nails were also scattered on the roads in an apparent effort to slow the security forces, the army said in a separate statement.

The areas surrounding the checkpoints have been closed off and are currently under forensic investigation.

Prime Minister Prayut Chan-O-Cha said the perpetrators must "be brought to justice", according to Defence Ministry spokesman Kongcheep Tantravanich.

Rebels seeking autonomy for the culturally distinct region bordering Malaysia have been fighting the Buddhist-majority Thai state, which colonised the area over a century ago.

The conflict is characterised by tit-for-tat attacks that usually target symbols of the Thai state and its security forces but civilians from both Muslim and Buddhist communities often get caught in the crossfire.

The violence has bled into tourist destinations, like in 2012 when a series of car bomb in Songkhla province's Hat Yai killed 13 people.

The incidents have been fewer in recent years, but the hits have been "more intense", said Don Pathan, an expert on the so-called Deep South.

It comes days after Bangkok hosted the Association of Southeast Asian Nations (ASEAN) summit, which brought head of states from all over the world -- along with hundreds of foreign press media, said Pathan.

"It (the attack) is a reminder that they are still here," he said.

The rebels accuse the state of railroading their distinct culture as well as carrying out routine abuses which go unpunished.

The latest incident stoking outrage in the region was the death of Abdulloh Esormusor, a Muslim man who was detained by the military and left in a coma after being interrogated at a notorious Thai detention centre.

Suspects are routinely taken for interrogation and held under emergency laws in detention centres where rights groups have documented torture.

Days after Abdulloh's detention, four people were killed in a late-night attack on a military outpost, fuelling speculation of a retaliatory operation.

A week later several small bombs exploded in Bangkok, injuring four people as the city hosted a major summit attended by top diplomats, including US Secretary of State Mike Pompeo.

Thailand has linked the bombs to southern insurgents and said the devices used were similar to those found in the south -- though no group ever claimed responsibility for the attacks. 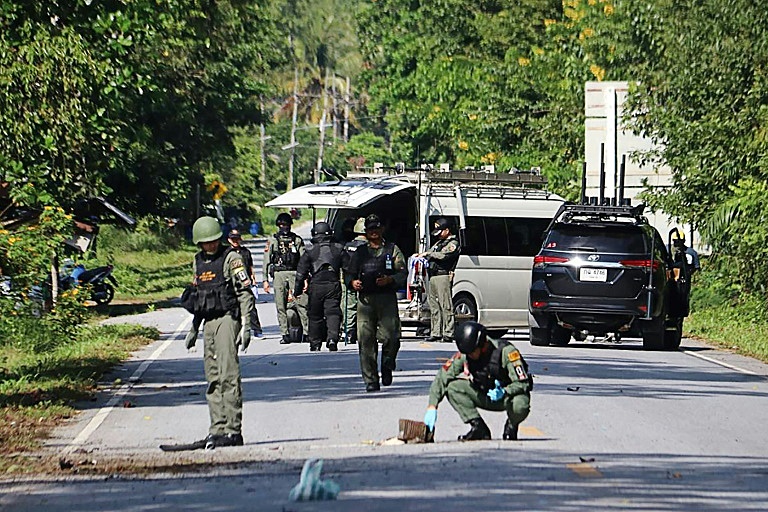 Suspected separatist insurgents stormed a security checkpoint in Thailand’s Muslim-majority south and killed at least 15 people, including a police…

AFP
Cambodian exiles plan to defy 'the Mugabe of South-East Asia'
Some 20,000 troops are deployed across Cambodia as exiled opposition leaders plan to return to the kingdom and face near-certain…

ABC News
One subscription that gives you access to news from hundreds of sites
Despair, jihadism and revolt: Mali's torn heart

Mopti (Mali) (AFP) - Untroubled by time, the mighty Niger River glides through the Sahel city as women wash their…