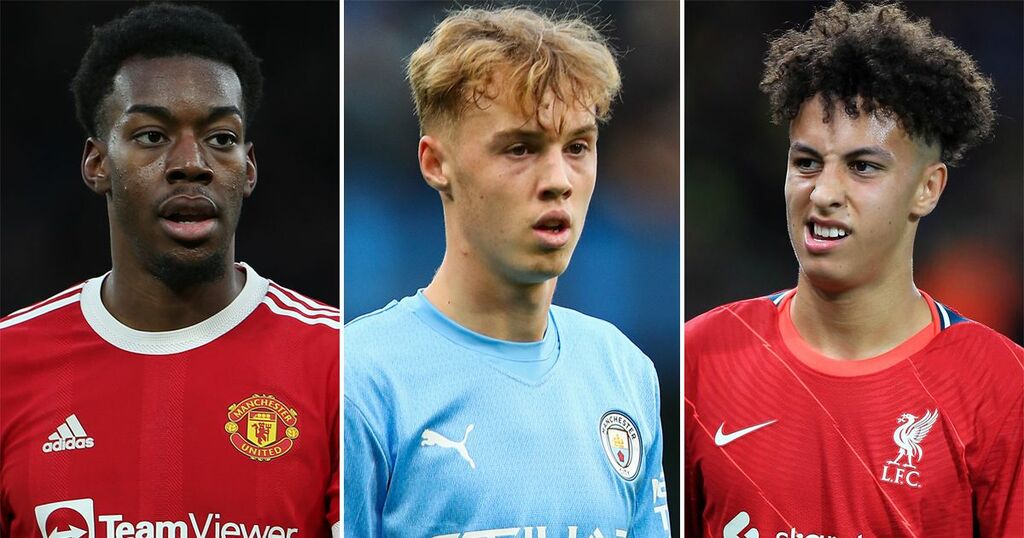 After a busy month of Premier League action, a number of top-flight sides are preparing to give some of their star names a rest as the third round of the FA Cup gets underway.

The third round of the competition features a handful of all-Premier League clashes, including Manchester United v Aston Villa, while the likes of Swindon Town and Chesterfield will be aiming to cause shocks against Manchester City and Chelsea respectively.

Last season's third round saw a number of youngsters catch the eye, with Louie Barry scoring for a youthful Aston Villa side against Liverpool and 16-year-old Alfie Devine opening his account for Tottenham Hotspur.

Mirror Football has taken a closer look at some of the other youngsters who might be in line for minutes this weekend as managers opt for a blend of youth and experience.

Which youngster are you most excited to watch in the FA Cup third round? Have your say in the comments section

Cole Palmer scored his first Manchester City goal in this season's Carabao Cup, before adding a Champions League strike soon after, and now has an opportunity to score in a third different competition.

The 19-year-old also netted for City's under-21 side in the Papa John's Trophy, and is expected to be involved with the first team away at Swindon.

Palmer has five goals and three assists in six Premier League 2 games this season, and is well on track to stake a claim for more Premier League action after making his first start in the competition in November.

While Manchester United have a number of unhappy players in their squad at the moment, Elanga is not one of them.

The Swede has enjoyed a few run-outs under Ralf Rangnick, with the German already giving him more minutes this season than Ole Gunnar Solskjaer did in the first few months of the campaign.

Another opportunity could come along against Villa, giving the 19-year-old a chance to add to the goal he scored in a Premier League win at Wolves at the end of last season.

Gordon was snapped up by Liverpool in 2021 after making his Derby County debut as a 16-year-old, and has already been given minutes by Jurgen Klopp.

The teenager played the full 90 in a Carabao Cup win at Norwich in September, and was named on the bench for the Reds' Premier League games against Arsenal and Tottenham.

With Mohamed Salah and Sadio Mane away at the Africa Cup of Nations, he will hope to get another opportunity against Shrewsbury Town on Sunday.

Vale has already tested himself against Premier League opposition, starting Chelsea's Carabao Cup win over Brentford and coming on against Tottenham in the semi-final of the same competition.

The attacking midfielder only turned 18 in September, and was named in a Premier League matchday squad for the first time as the Blues drew with Liverpool on Sunday.

Thomas Tuchel has spoken of the strains on his squad, so Vale could be in line for another start against Chesterfield as the manager gives some senior players a rest.

Patino enjoyed a dream debut for Arsenal in December, coming off the bench to score in the Carabao Cup quarter-final victory over Sunderland.

With Thomas Partey and Mohamed Elneny at AFCON and Ainsley Maitland-Niles joining Roma on loan, the 18-year-old should have an opportunity to add more minutes in midfield.

The youngster was on the bench for Arsenal's Boxing Day league win at Norwich, and was training with the first team ahead of Sunday's trip to Nottingham Forest.

Last season's third round win at Marine saw Spurs give minutes to a number of young talents, and Markanday will be hoping history repeats itself as Antonio Conte's side host Morecambe.

The 20-year-old made his Spurs debut in the Europa Conference League against Vitesse, and has been among the substitutes on a number of other occasions.

With 11 goals in Premier League 2 this term, he could find himself in contention to show Conte his quality for the first time.

Nelson was close to a Leicester debut over the festive period as the Foxes dealt with a defensive crisis, sitting on the bench for three straight Premier League games, and he was also among the subs for the Carabao Cup defeat against Liverpool.

A 17-year-old centre-back, Nelson has played eight times in Premier League 2 this term and travelled to Napoli with the first team for their final Europa League group game.

Leicester will be without Wilfred Ndidi and Daniel Amartey for their game at home to Watford on Saturday, potentially giving the teenager a chance to deputise.

David Moyes gave youth a chance in last season's FA Cup as West Ham reached the fifth round, and could do so again against Leeds.

Longelo was one of an all-academy back-four to start the Europa League game against Dinamo Zagreb in defender, and impressed with his attacking threat from left-back.

He is in the squad for Sunday as Aaron Cresswell remains sidelined, and could be handed another opportunity to impress.

If Longelo does start over the weekend, he could find himself having to deal with in-form Leeds man Summerville.

Signed from Feyenoord in 2020, the Dutch winger scored a hat-trick earlier this week as Leeds' under-23s drew with Sunderland in the Premier League Cup.

The 20-year-old already has five Premier League appearances to his name this season, and made his first senior start in the Carabao Cup.

21-year-old striker Simms was part of a youthful Everton team thrown in at the deep end against Chelsea in the Premier League, playing an hour as Rafa Benitez's side earned an impressive draw.

Simms has been an unused sub for a number of other Premier League games, and his omission from this week's under-23s squad suggests he could be involved for the Toffees against Hull City.