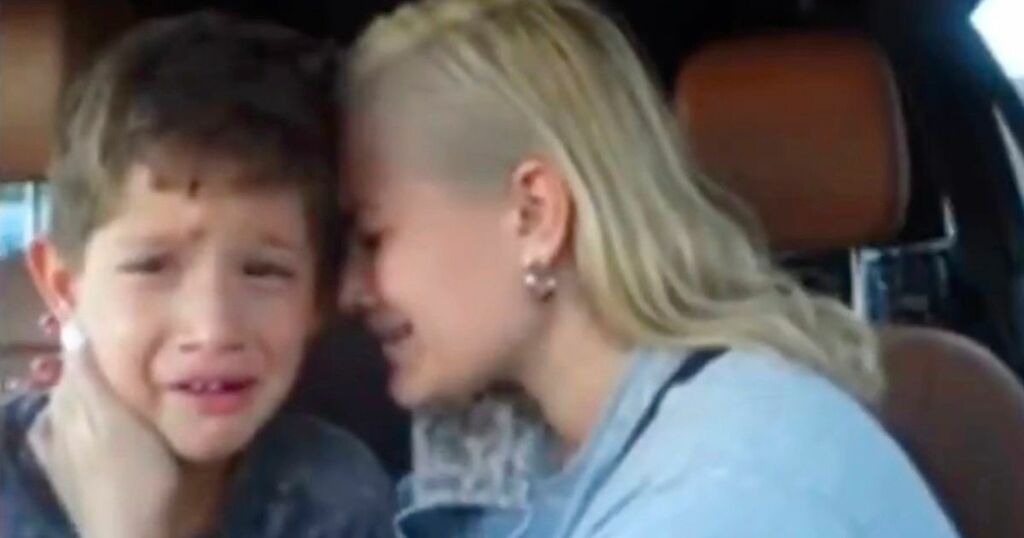 A YouTube star has deleted her channel with half a million subscribers after accidentally sharing a video of herself coaching her crying son to pose for the camera.

Jordan Cheyenne, 30, shared a video entitled "We are heartbroken" as she spoke about how her puppy had been diagnosed with parovirus, a condition which can be fatal to unvaccinated dogs.

The California-based vlogger is seen in the clip pulling her crying son Christian towards her so they can pose for a video thumbnail.

"Come closer," she tells him as they sit in a car. "Put your head right here."

She pulls him in and rests his head on her shoulder, telling him: "Act like you're crying."

"I am crying," the upset youngster tells her.

She holds one hand up at her face, looking visibly upset as the young boy stares into the camera.

She pulls a crying face and tells her son: "Go like this for the video."

She continues to instruct him on how to cry, telling him to hold his hand up to his face and make crying noises.

"Let them see your mouth," she instructs him.

She tells him to look at her, then to look at the camera as she pulls a string of poses.

One person who saw the video on Jordan's YouTube channel shared it on Twitter, writing: "this is so DISTURBING what is wrong with mom vloggers omfg"

They added: "everyone keeps asking the same questions, this is about the puppy they just bought having parvo, the son IS crying. real tears. shes forcing him to “fake cry” for views, it was accidentally uploaded, she forgot to edit this part, she removed the vid & posted an ‘apology’"

Jordan had described herself as a "beauty and lifestyle content creator", and she often vlogged about her life as a single mother, having been on YouTube since 2013.

The section of the video in which she coaches Christian on how to cry for the camera was at the end of the clip, and it's believed she had intended to edit it out.

Following backlash, Jordan said that she would stop including her son in her YouTube videos.

She later said that she would be removing her channel so that she could focus on Christian's "health and wellbeing".

She said in a statement: "Getting completely offline, canceling all videos and monetization, and prioritizing my child are all I care about.

"I'm disgusted and horrified at what I did and there is absolutely no excuse. It's terrible on so many levels. I love my child more than anything and will regret this moment forever."

Jordan also posted a follow-up video in an attempt to explain her behaviour. She titled it "I am immensely disappointed in myself".

In it she said: "In the ending of the video, I was so emotionally worn out... I had christian on my shoulder and I was like 'come pose for the thumbnail with me' after the video... I shouldn't have done that.

She added: "Me trying to get that thumbnail was just so wrong and such poor judgement of me, but that doesn't condone bullying and harassment."