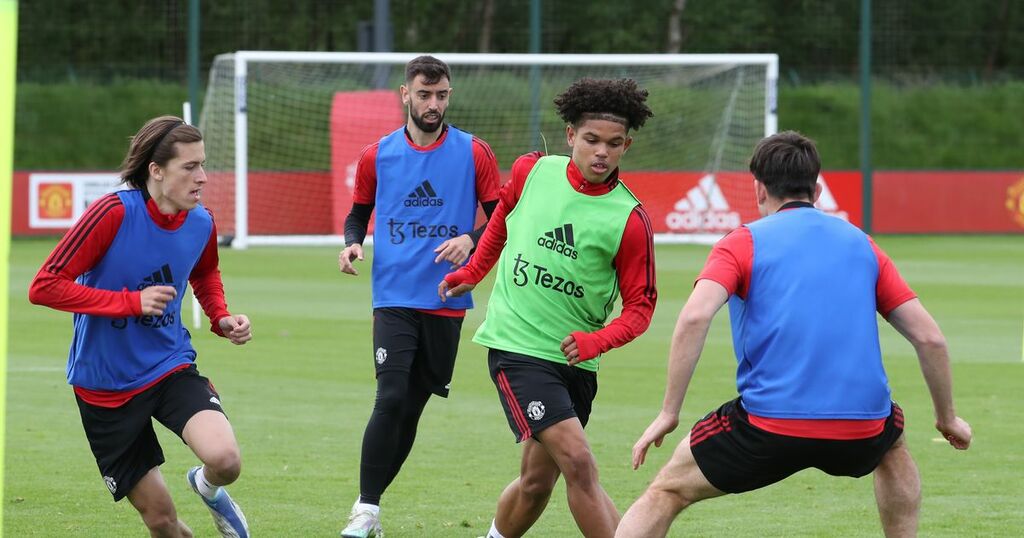 If there is something of an end-of-term feel around Manchester United at the moment, you would not know it from…

Manchester United have just one game left this season before the season can finally come to an end.

It's been a dreary year full of frustration and embarrassment but Ralf Rangnick's side can try and end on a high when they face Crystal Palace. A quirk of the fixture list, due to Chelsea's participation in the FA Cup final, means United have a two-week break before the match and preparations have begun in training.

The players were put through their paces on Thursday and the club has released a series of photographs and a short clip from the session. Here are four things we spotted...

Following the conclusion of his loan spell at Birmingham City after the Championship season came to an end, Teden Mengi has returned to United. Instead of jetting off on his holiday after a long season, however, the young defender has been training alongside the senior stars.

Mengi, who is rated highly at the club and has captained the youth teams, joined Birmingham on loan in January and made 10 appearances as the Blues managed to avoid relegation. Now he will be vying to be involved in incoming manager Erik ten Hag's plans next season.

Youngsters to get a chance?

Mengi wasn't the only youngster in action in the training session with Hannibal Mejbri, Shola Shoretire and Alvaro Fernandez all involved as well.

Supporters have been desperate to see the club's talented youngsters given a proper chance in the first team when it became clear the season was over and perhaps that will finally be the case in Rangnick's final game in charge at Selhurst Park.

One player fans definitely want to see in the senior side is Alejandro Garnacho. The thrilling winger has been the breakout star of the season, largely thanks to his exploits in United's triumphant FA Youth Cup campaign. Garnacho scored twice in Wednesday's final victory over Nottingham Forest to take his tally to seven goals and three assists in just six matches.

He has already been handed his first-team debut, as a late substitute against Chelsea, but he too will be wanting to get more minutes before the season finally ends. However, he wasn't in training with the seniors in Thursday's session.

That's hardly surprising though as he was likely given the day off following the final, with no other Under-18s spotted in training either.

Confidence may be at an all-time low when United take to the field, but that doesn't appear to be the case at Carrington. The players looked confident and composed when partaking in passing drills under the watchful eye of Rangnick.

Hannibal particularly impressed with a spinning pass to play a silky one-two with Victor Lindelof, while left-back Alex Telles pulled off a nice flick to get the ball past his marker. Hopefully, some of that confidence is seen against Crystal Palace.

If there is something of an end-of-term feel around Manchester United at the moment, you would not know it from…