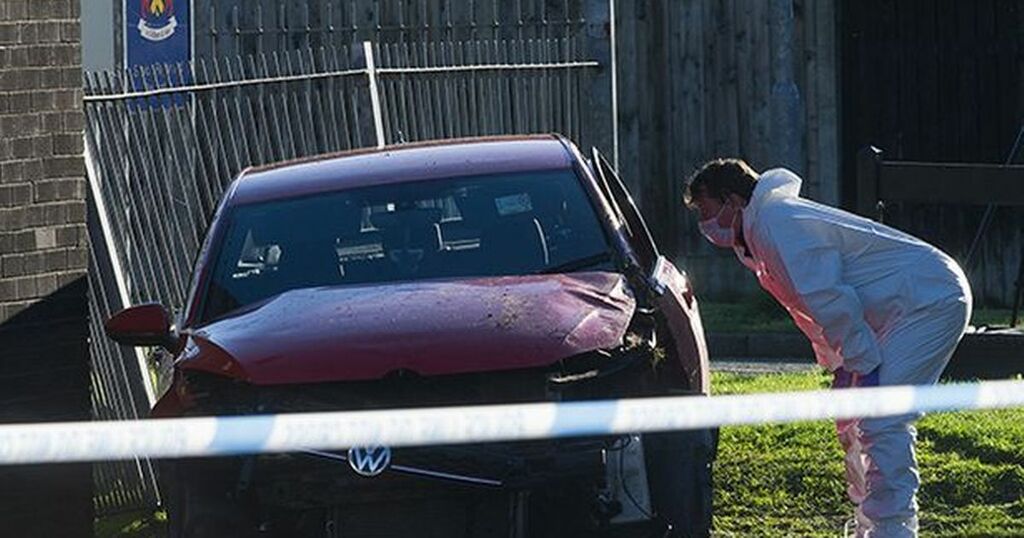 A young man 'screamed for his mother' as he was dragged from a car wreckage and brutally attacked by a gang of thugs armed with machetes and 'chains'.

The 21-year-old sustained 'potentially life-threatening injuries' in the vicious assault in Rochdale, according to Manchester Evening News.

Greater Manchester Police stated the victim was beaten following a crash on the night of Tuesday October 5.

A witness said the man was pulled from the VW Golf - which was later concealed behind a forensic tent at the scene, before being removed for further examination - after it smashed into a lamp post.

A group of men who had been chasing the car in a pickup truck then launched into a horrendous attack against the driver, the witness continued.

The terrifying incident happened on Bentley Street, off Shawclough Road, at around 9.45pm.

No arrests have been made.

The victim is being treated in hospital.

The witness described how he went to the window after hearing a loud noise and saw smoke.

"I quickly grabbed my shoes and went running out to see a silver pickup truck pull up and a gang of guys get out," he added.

"They pulled the driver [out] of the car that had crashed, which was a red Golf, and beat him and hit him with chains.

"All I could hear was a guy screaming for them to stop, which they did, then casually they got in the pickup truck and drove off.

"As I got down to the bottom of the road, a member of the public was already assisting the man who had been attacked who was covered in blood. The car was a total wreck.

"A lamppost had been completely knocked over. A BT junction box had been removed from the ground.

"The man was screaming for his mother, that we 'call her as he was going to die'."

"This guy was beaten very badly and there was a lot of blood," he added.

"It was very shocking incident. It was quite horrific thing to occur near our normally peaceful neighbourhood."

A large police cordon was in place on Wednesday morning.

Pictures from the scene showed forensics tents and evidence markers as the investigation continued.

Police are appealing for witnesses.

A Greater Manchester Police spokesperson said: "At around 9.45pm on Tuesday, October 5, police received a report of a collision and a male being assaulted on Bentley Street, Rochdale.

"Emergency services attended and enquiries established a 21-year-old man was seriously assaulted by a group of males with machetes.

"He has been taken to hospital with potentially life threatening injuries.

"Enquiries are ongoing and no arrests have been made. A scene remains in place this morning."