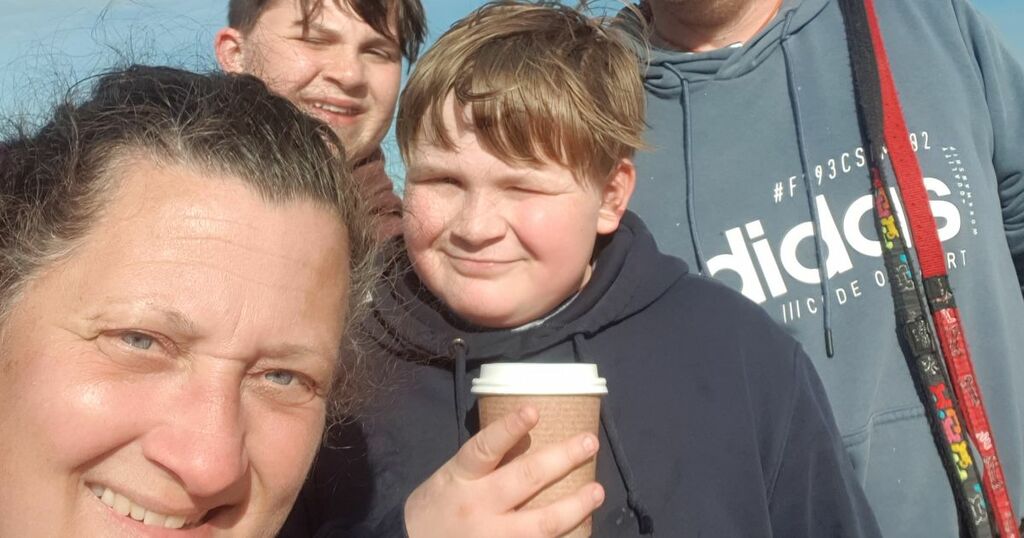 A schoolboy saved the lives of his mum and brother after they suffered allergic reactions to peanuts while at home.

Izaac Peacock, then 10, called for an ambulance and helped to provide access for paramedics when the pair became ill.

The incident happened on January 28 last year, while the family were watching Eastenders.

"Quite frankly I could have died."

In the aftermath of what happened, she was on steroids for a while, her face "was like a balloon" and she couldn't open her eyes.

Harry was deemed to be okay by the paramedics at the family home in East Leake.

But Clair's parents stayed with the boys while she and her husband went to A&E at the Queen's Medical Centre.

She said: "My breathing by the time I got there was not good.

"The paramedics were fantastic with Izaac, they actually went and showed him how the ambulance worked just to calm him down.

"They have got a little whiteboard in the ambulance, they said he could write on it.

Dad Nik Peacock, 48, said he could not be prouder of Izaac, who is now 12 years old and in year eight at school.

"It brought the boys a lot closer together, being boys with only two years' difference in age, they are like any other siblings: they are best friends one moment and the worst of enemies in others," the police constable said.

"But that really did bring them closer."

Clair, who is allergic to all nuts, explained the family had unintentionally eaten peanuts.

On what happened, she said: "We were sat watching TV and Harry said that he was hungry, he wanted a snack.

"I said 'well try the new snacks that I have bought'. I had bought some natural snacks to go in their lunchbox - they were cocoa-based and I bought them previously from one shop, and I got these from a different shop.

"When Harry ate them, he said 'oh, they taste a bit funny'. Izaac said 'I don't like that' - I tried it and I knew straight away it had peanuts in it. Whereas when I bought it from the other shop it had no peanuts in it.

"In my naivety I had not checked the label fully.

"We both reacted to eating the treat, I went upstairs to the bathroom to do what you should do in that [situation]: that is to clean your mouth, and to clean with toothpaste."

She started to swell up and Harry went red - and, knowing something was wrong, Izaac phoned his dad and the ambulance service.

"My gums were very swollen, I was feeling very sick - I was trying to vomit," said Clair.

"He collected the food that was left and placed it all inside a sealed bag, so he could hand that to the paramedics when they arrived [so they knew] exactly what had been eaten," added Nik.

Nik, who had been at work at the Loughborough Police Station, received a call from Izaac and ended up following the first response car.

"I got home, I can't thank the first responders enough," he said.

Clair explained both her sons have processing disorder, a condition in which the brain has trouble receiving and responding to information, but that Izaac had followed instructions very clearly.

At the time of the incident, because of her nut allergy the household had been "completely nut-free" - but at this point in time it was unclear if the young boys were allergic too.

Clair had suffered an anaphylactic shock and said Harry had a "mild reaction", with Harry being tested to see if he also has a nut allergy.

Izaac has been awarded a commendation for bravery from Leicestershire Police's Chief Constable Simon Cole QPM.

He has also been awarded a Royal Humane Society Certificate of Commendation.

The Queen is a patron and the society is a national body honouring bravery in saving human life.

Secretary of the Royal Humane Society, Andrew Chapman, said: “A lot of adults would have panicked in a situation like this.

“For a 10-year-old to show such incredible calm and deal with the situation the way he did is incredible.

"His family must be immensely proud of him. It was a life and death situation and he saved the day.

"What a young hero - he richly deserves the award he is to receive.”