The Swedish policy of neutrality during World War 2 remains controversial, but before the war the Swedish government knew it needed to build up its military for its own protection. The government formed Svenska Aeroplan Aktiebolaget, or Saab, with the intent of building planes. After the war, Saab took its engineering experience into a peacetime venture: Cars.

By the late ‘70s, Saab had a luxury reputation in America. The 1979 Saab 900 Turbo became the first mainstream turbocharged car on the market. The company wanted to highlight this technical breakthrough by showcasing both its military and civilian divisions, so it commissioned an ad comparing the two. What the company got would, in many ways, define the next decade of movies.

Strings play as two men silently approach a plane and a car. Both vehicles are swathed in light, creating a dreamy visual which makes them feel more like oddly shaped surfaces than complex machines. But as the drivers enter their vehicles, movement begins, creating a sense of magic. Doors open, handles are pressed, cockpits are closed, stoic expressions are made, and a voiceover proudly announces, “nothing on Earth comes close.”

The director of this ad was Tony Scott, and its success led to him directing Top Gun. The 1986 movie is in many ways an extension of a commercial that sought to meld people and machines together. But instead of showcasing Swedish engineering prowess, Scott is combining the unstoppable force of the American military with the unstoppable charisma of Tom Cruise.

There’s some Cold War conflict in Top Gun, although it’s not really the point of the film. In the movie’s first scene, Soviet MiGs are threatening Americans Maverick (Cruise) and Goose (Anthony Edwards). But why isn’t important compared to the moment where a plane is inverted to flip the Soviets the bird before a rattled pilot is helped to land safely when the incident is over.

The legendary filmmaker Francois Truffaut once told Gene Siskel that it was a challenge to make a truly anti-war movie because movies “glamorize everything and always argue for whatever behavior they show.” Top Gun sees this as a feature, not a bug. As Kenny Loggins sings “Danger Zone,” planes are bathed in golden light.

Color and sound reign supreme in Top Gun, from the dark blues of radar to the Academy Award-winning song “Take My Breath Away.” Top Gun often expresses feeling more than narrative, which helps because the script is often lacking. We’re told over and over that Maverick is a lady’s man, although he strikes out with Charlie (Kelly McGillis) despite his impromptu singing of “"You've Lost That Lovin' Feelin'.” Charlie, who we later learn will also be Maverick’s instructor, has the same problem with him as everyone else: He’s too damn good. At his job, at being cool. So she can’t stop seeing the cocky bastard.

One could argue that Charlie isn’t Top Gun’s main love interest. The movie’s homoerotic reputation precedes it, which partially comes from Scott using photographer Bruce Weber’s Looking Good: A Guide for Men as an influence. The camera both lovingly and aggressively focuses on Maverick, Iceman (Val Kilmer), and a host of other strapping young lads playing volleyball for the sheer joy of it.

“I knew I had to show off all the guys, but I didn’t have a point of view… so I just shot the shit out of it,” Scott said of the scene on the movie’s Blu-ray. But that could just as well apply to anything else in Top Gun. The movie is loosely structured around a competition in the Top Gun program, but it’s much more focused on hanging out with its characters.

There’s a reason everyone remembers the volleyball scene, as opposed to the climactic battle in which Maverick and Iceman put aside their differences to shoot down MiGs together. That final fight comes out of nowhere, with the Top Gun graduates quickly being told to drop what they’re doing for a rescue mission. The volleyball scene, on the other hand, feels natural. We’ve watched these characters compete with each other in class, so it makes sense they would also compete while they’re having fun on the beach.

Top Gun doesn’t have a particular point of view beyond “planes are cool,” and “being a rebel in a system who also supports the system is cool.” It would much rather focus on the vibe, which changes drastically between all the love and dogfighting. Cruise and Kilmer play a large part in that, but ultimately Scott really just shot the shit out of it.

Top Gun is streaming on Netflix until May 31. 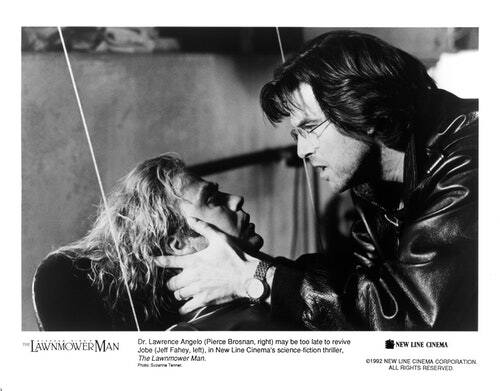 You need to watch Pierce Brosnan’s weirdest sci-fi thriller before it leaves HBO Max next week
In 1992, 'The Lawnmower Man' gained notoriety for its groundbreaking VR effects. But, the actual movie is better than just…

Christopher Nolan’s final film before fame is a taut thriller that shows why he became a household name.

This 1992 movie may be overlooked as part of a series, but it stands firmly on its own two feet.