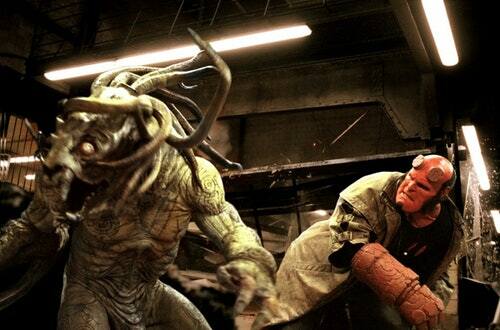 It’s hard to think of a modern director more in touch with the inhuman than Guillermo del Toro.

From 2002 through 2006, del Toro released three movies that offered powerfully different conceptions of what it means to be a monster.

The first, Blade II, examined the sensation of being trapped between two worlds (while being gory as possible). The third, Pan’s Labyrinth, explored the monsters of fascism. In the middle of these two was 2004’s Hellboy.

Fighting against Nazis in bright, bold red, Hellboy was a comic-book adaptation that pushed the idea of monsters beyond merely those who desire acceptance from the outside world. Instead, the monsters of Hellboy found a community with one another.

The film’s themes of loyalty and personal autonomy extended beyond the screen, proving consequential in getting the film made as its creators envisioned. Hellboy, the character, was initially the creation of Mike Mignola, a for-hire comics artist who in 1991 fielded a fan request to draw a big demon called “Hellboy.”

A couple of years later, in 1993, Mignola brought the character into his concept of a series built around an occult detective. The vision expanded to an entire universe, focused on Hellboy and the Bureau for Paranormal Research and Defense, which investigated monsters of all sorts.

Del Toro had known about Mignola’s work for years, and both of them wanted to collaborate. A Hellboy movie could have been made years earlier than it was, had del Toro relented on one specific demand: Ron Perlman had to play Hellboy.

Perlman, who’d worked with del Toro on Blade II and his earlier film Cronos, was stunned to learn that the director had fought for him. “He really could have made the film on 20 different occasions if he had used this actor or that actor,” he told Black Film in 2004, calling del Toro’s determination “the most generous gesture I have ever witnessed.”

One can see where a studio executive might be reluctant to cast Perlman, who was 54 when Hellboy hit theaters. Though comic-book movies were gaining in popularity, from X-Men to Spider-Man, these movies were generally the domain of teenagers. On top of that, Hellboy has “boy” in his name.

But while boys may age into men, immaturity can last a lifetime. Hellboy, we’re told, has the emotional maturity of a guy in his early twenties, and here Perlman excels. A little like Blade, he’s torn between two worlds, experiencing severe growing pains as a result. On the one hand, he was brought into this world by Rasputin (Karel Roden), a mystic who survived his fate in waning Imperial Russia to align himself with Nazis, who were interested in his dark magic.

But also present on that night, when occult magic brought Hellboy to Earth, was Professor Trevor Bruttenholm (first Kevin Trainor, and then John Hurt), an American working with the U.S government to investigate the paranormal. It’s not like the United States exactly understands Hellboy — soldiers with Bruttenholm first want to shoot the cute devil baby then call him a monkey — but they tolerate the new arrival and quickly realize his potential.

Fast forward 60 years, and the U.S government has bureaucratized Hellboy to its best ability. The B.P.R.D reports to FBI Director Tom Manning (Jeffrey Tambor), and Hellboy has a whole cadre of agents assigned to take care of him, the latest being John Myers (Rupert Evans). There are also two others in the B.P.R.D family: the telepathic fish-man Abe Sapien (body by Doug Jones, voice by an uncredited David Hyde Pierce) and the volatile pyrokinetic Liz Sherman (Selma Blair).

Del Toro cited the works of visual effects legend Ray Harryhausen as an inspiration for the action in Hellboy. Harryhausen, renowned for his stop-motion work, often made dead things like statues or skeletons come to life. His influence is clearly felt on Rasputin’s deadly assassin Kronen (Ladislav Beran, who also appeared in Blade II), whose innards have been turned to dust through an addiction to surgery.

A Harryhausen-esque spirit pervades the movie more generally, like when Hellboy temporarily revives a dead body and carries him around on his back, complaining all the while, and in Rasputin’s master plan, which revolves around lighting the Moon on fire and gigantic tentacle creatures descending from space. Grounded in Perlman’s gravitas, Hellboy reaches out into space and the underworld with ease.

The more grounded of the two Hellboy movies, this property was popular enough to earn an ill-fated reboot in 2019. But del Toro’s vision of Hellboy — in which cynical, wounded, and world-weary characters confront their literal demons — has stood the test of time.