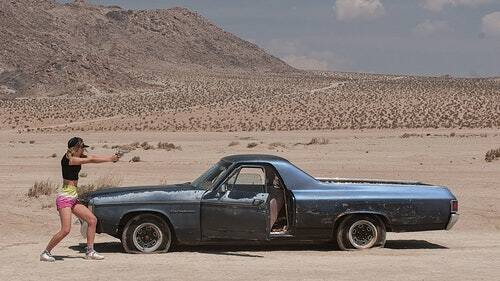 The post-apocalyptic thriller is a daunting undertaking. Yes, you have to tell a genuinely gripping story, but before you introduce any characters, you first have to establish the “rules” of the apocalypse.

Movies accomplish this in all sorts of ways; just look at the opening credits of any zombie movie or video game. But it takes genuine skill to communicate an entire apocalypse as quickly and efficiently as possible. This 2016 film saves a lot of time in exposition, leaving space for gorgeous visuals, touching monologues, and the ability to let the characters and moments take their time and breathe.

The Bad Batch — the movie, not the Star Wars spinoff series — is written and directed by Ana Lily Amirpour, the Iranian-American filmmaker best known for vampire western A Girl Walks Home Alone at Night. Now streaming on Netflix, The Bad Batch has an equally ambitious premise, following a woman named Arlen, considered a reject from society, as she navigates a desert wasteland where laws don’t apply.

In this new Wild West, she must escape cannibals, find a way out of a rave club, and come face to face with a cult leader played by Keanu Reeves referred to exclusively as “The Dream.” Along the way, she meets Miami Man, played with typical tenderheartedness by Jason Momoa. He’s looking for his daughter, allowing for Momoa to play the role he was born for: a tough dad who’d do anything to protect his kid.

The plot of The Bad Batch is meandering, but it’s clear this is all intentional. As Arlen wanders around the desert, just trying to pass the time and survive the day, so does the film's action. Yes, the plot is thrilling, but it doesn’t feel the need to be thrilling all the time. Sometimes, the apocalypse can be boring, full of people just trying to stay fed and alive.

Speaking of the apocalypse, we’re never told just what prompted the government to jettison the “bad batch” to a lawless land in Texas. All we’re shown is a sign in the movie’s first 10 minutes, warning all who cross that the surrounding land is not U.S. soil. Therefore within it, there are no protections. It’s a quick and easy way to establish what’s going on. The apocalypse isn’t the issue; the people that survived are.

One of the biggest criticisms of The Bad Batch is its self-indulgence. The movie throws everything at the wall. But really, that’s one of its greatest strengths. When Arlen arrives in Comfort, a Burning-Man-esque rave club, she takes a hallucinogen and undergoes a lengthy trippy montage. Yes, it’s indulgent, but so is Arlen. She’s living a hedonistic post-apocalyptic life. Why shouldn’t the film portray that?

The Bad Batch champions the lesser-known aspects of post-apocalyptic thrillers, mainly how life goes on even when the world ends. Whether that’s working 9 to 5 or teaming up with a Cuban immigrant to rescue his daughter from a cult, there’s nothing you can do but live.

The Bad Batch is now streaming on Netflix.