In 1966, Australian author Joan Lindsay had a series of dreams that would influence both Australian literature and cinema, and 21st century American horror. They revolved around a place where she had spent many childhood holidays, a distinctive Australian geologic formation known as Hanging Rock.

Lindsay sketched out the basics of a story focused on an elite ladies’ college in the region. In 1900, some of its students go for a picnic and never return. Their sudden disappearance, which Lindsay framed as a true event, turned their community upside down. The central mystery of what happened to the girls is never revealed, letting readers feel the same confusion as the characters.

The resulting 1967 novel, Picnic at Hanging Rock, became a sensation that would be adapted by Australian New Wave director Peter Weir in 1975. Weir once told Sight and Sound that, in attempting to recreate the feeling of the novel, he had “worked hard at creating an hallucinatory, mesmeric rhythm, so that you lost awareness of facts, you stopped adding things up, and got into this enclosed atmosphere.”

It’s easy to see why M. Night Shyamalan cited Picnic as an inspiration for his 2021 movie Old. Shyamalan’s best movies have a distinct lack of specificity in their surroundings, and the audience feels things being withheld from them. Shyamalan, in movies like Sixth Sense and Unbreakable, creates worlds that feel both limited and limitless. Throughout them, the viewer can sense a boundary being pushed without being quite sure what’s happening.

It’s easier to figure out the core mystery in Old, which was so heavily advertised that its premise transformed into a meme. It’s the beach that makes you old. If nothing else, Old’s release showed that Shyamalan, who himself had become a meme over 20 years prior thanks to “I see dead people,” knows how to take a few fundamental elements of human life and rearrange them into an irresistible premise.

While the meme sums up the plot’s basics, there’s more here worth digging into. There’s Guy Cappa (Gael García Bernal) and his wife Prisca (Vicky Krieps), who are taking their kids Trent (Alex Wolff and Emun Elliott) and Maddox (Thomasin McKenzie and Embeth Davidtz) on an island resort vacation. Guy, an actuary, and Prisca, a museum curator, both love their kids but are hiding a few secrets. Prisca has a tumor, and the couple is on the verge of divorcing.

On that second point the kids know a little more than they’ve let on, having heard Guy and Prisca yelling at each other through closed doors. But, for now, everyone is just trying to have a nice time. And that’s what the friendly resort manager (Gustaf Hammarsten) promises them when he tells them about a hidden beach.

Problems start to mount once Trent finds a floating body. Once Mid-Sized Sedan reveals that he came to the beach with the victim, suspicions flare. Charles suspects him of foul play. Soon, Agnes dies. And then, to everyone’s shock, the kids start getting older. Trent, who was six, now appears eleven, and his tween sister is now a full-fledged teen. Everyone starts to freak out.

Not only is the beach making them old, it won’t let them leave. Any attempt to head back the way they came is met with debilitating headaches that cause a person to pass out and end up right back where they started. Attempts to scale the surrounding cliffs or swim out meet with similar results.

There are plenty of critiques that have been made about Old, a movie with a decidedly mixed critical reception. The exposition is too clunky, the ending drags on, none of it makes any sense. Some of this is true.

But watching Old, it’s easy to get sucked into its simple-yet-brutal premise, and the actors sell it with a feeling of paranoia and confusion. Stuck in the moment with these characters who are aging beyond their control, whose weaknesses are coming to dominate their bodies, it’s easy to forgive Old’s flaws.

Old is streaming on HBO Max. 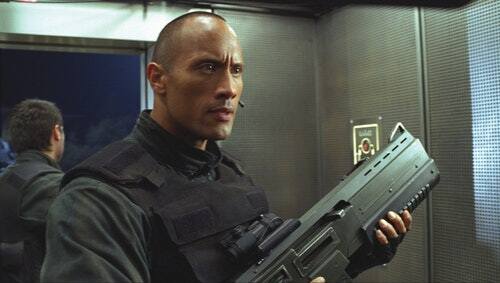 You need to watch The Rock’s most subversive sci-fi thriller before it leaves HBO Max next week
Before Dwayne Johnson became a billion-dollar box office star, his villainous turn in the 2005 'Doom' remains a sight to…

This ambitious 2021 blockbuster works as both a thrilling sci-fi sequel and as a scathing critique of modern-day Hollywood. Here's…

This reality series sees a group of UK twentysomethings head to the US, pretend to be teens, and compete for…