You don’t even understand the basics: Chinese ex-diplomat to EU envoy 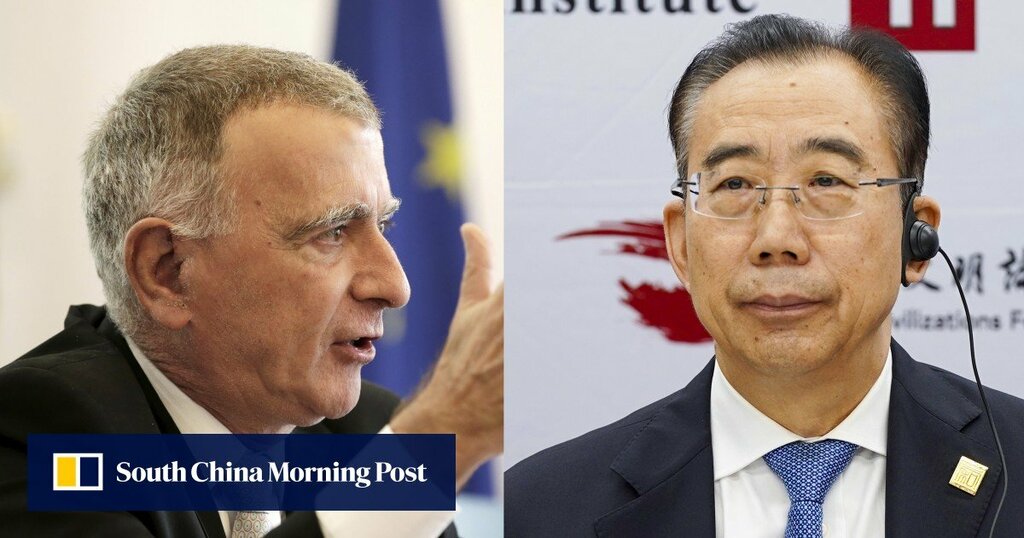 A former senior Chinese diplomat has accused the European Union’s ambassador of not understanding “the basics”, lashing out at his criticism of China’s “changing” diplomacy and warning of a grave impact on relations with the EU.

This came as the two sides continued to press each other on resolving thorny issues in relations, ranging from human rights concerns and Taiwan to tit-for-tat sanctions and a stalled trade deal.

Wu Hailong, a former assistant minister at China’s foreign ministry, hit out after the EU ambassador Nicolas Chapuis accused China of changing its diplomatic posture and questioned Beijing’s response to Lithuania and Taiwan’s agreement to set up representative offices.

“You don’t even understand the basics,” Wu said in a raised voice as he commented on Chapuis’ speech in a largely online forum on China-EU relations on Wednesday.

Hosted by the Chinese think tank Taihe, the forum was attended by a mix of Chinese academics, retired Chinese officials, and a few foreign diplomats and analysts.

Wu accused Lithuania of going against the one-China principle, the official view that Beijing expects its diplomatic partners to adopt.

Lithuania’s decision in August to allow Taipei to open a de facto embassy bearing the name “Taiwan” angered Beijing, which recalled its ambassador to Vilnius and demanded reciprocal action.

“After staying in China for so many years you still have such understanding! I am very shocked!” Wu said, warning that if Chapuis continued with his “biases and misunderstandings”, it would hurt prospects for improved bilateral relations.

Wu also attacked Chapuis for having “no reason at all” to accuse China of imposing “disproportionate” sanctions on Europeans in March, which it did in response to EU sanctions on officials accused of human rights abuses in Xinjiang.

The European Parliament responded to China’s move by voting in May to freeze a long-awaited EU-China trade deal: the Comprehensive Agreement on Investment.

“In the past 30 years it’s the first time the EU has sanctioned China, and you dare to ask us to only make proportional retaliation? If you are going to sanction us, we can also use all sorts of ways to retaliate. So what you are saying is not reasonable at all,” Wu said.

Chapuis, an experienced sinologist and translator, is a veteran French diplomat who served in both of France’s offices in Beijing and Shanghai. He has been EU’s ambassador to China since 2018.

Chapuis said he respects Wu’s work but warned China of how its actions are affecting its image among Europeans.

“We may be mistaken, but we think in Europe today, everybody – government, public opinion, academics – are today convinced that China is changing, and you are telling us today that it is not the case. That is a perception issue that we need to tackle …. you are all entitled to your views but please do understand that in Europe people are convinced that China is changing its diplomacy,” Chapuis said.

The intense give and take that escalated to a personal level highlighted the ongoing conflicts between Beijing and Brussels, which have led experts and officials on both sides to harbour few hopes of any icebreakers in the short term.

Each side has blamed the other for relations going downhill and say their requests have fallen on deaf ears.

Chapuis said he saw evidence of this change when China’s top diplomat, Yang Jiechi, clashed with US Secretary of State Antony Blinken at a high-level meeting in Alaska in March.

“I am very sorry to see that China does not give any credit to the EU in bringing the US back to the path of engagement. Why? Because China has decided to not reset the relationship with the US.

“The Anchorage meeting in March 2021 is for me, a very significant signal and very disappointing … The government rejected the return to engagement,” he said.

“So what does China want? What is the objective, the purpose of China today in foreign relations? It’s clearly not the same purpose as 10 years ago, it is different. We are sometimes at a loss to understand exactly what China wants.”