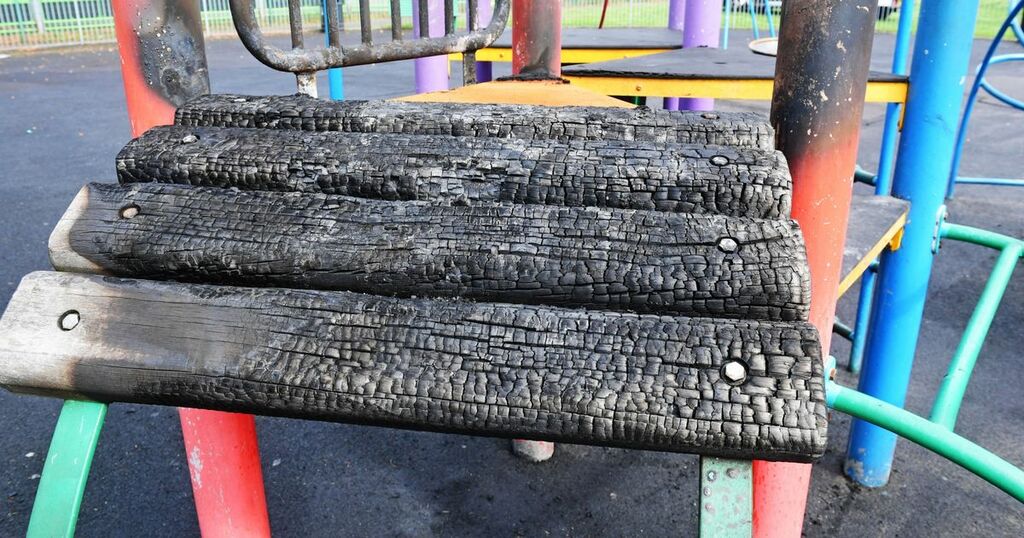 Teen yobs who deliberately started a fire at a children's play area went on to hurl bricks at the firefighters called out to tackle it.

The shocking incident took place at Walton Hall Park on Tuesday night, close to the Lifestyles sports centre in Walton.

Crews were alerted shortly before 9.30pm to reports of a fire in the play area.

When firefighters arrived, they found a climbing frame ablaze. But before they could put it out, the yobs believed to be responsible began hurling bricks at them, forcing the crew to withdraw and wait for police assistance to arrive.

Once officers were on the scene, the youths dispersed and fire crews extinguished the blaze.

There were no reports of anyone being injured, however the incident caused severe damage to a climbing frame and led to the play area being closed on safety grounds.

CCTV and witness enquiries are now under way to find those responsible.

Detective Inspector Gavin Mulcahy said: "I would appeal to anyone who was in the area of Walton Hall park on Tuesday evening who saw or heard anything suspicious to contact us.

"This is a senseless crime which has caused damage to play equipment spoiling the fun for other children.

"For people to then throw bricks at the attending fire crews is shocking and those responsible deserve to be brought to justice. I would urge anyone with information to come forward and speak to us."

According to the Friends of Walton Hall Park volunteer group, the youths started the blaze by dragging across wood and foam left outside the sports centre after a refurbishment and set it alight.

Chrisie Byrne, who runs the Friends group, said: "We have worked hard every day for the last seven years alongside the community to improve the park for them and the visitors. The park is very popular and the fourth biggest in Liverpool.

"We have never suffered from arson on a regular basis nor gangs, so it was a shock to see the the damage.

"We are more upset that it is the local children that have lost out and will not feel the benefits of this play area over the autumn. "

She added: "We have been awarded funding now for new play equipment and a brand new play area from Liverpool city council and we will improve the play area so it is even better for the children to enjoy."