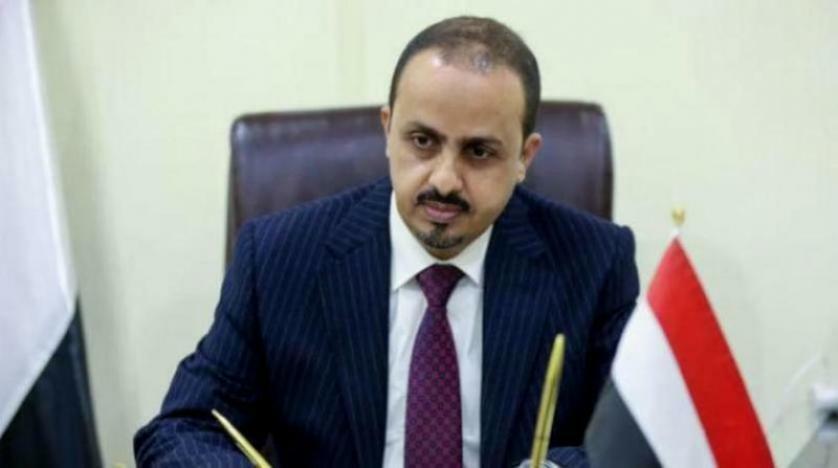 Yemeni Minister of Information, Culture and Tourism Moammar Al-Eryani questioned on Saturday the silence of the UN Mission to support the Hodeidah Agreement (UNMHA) over the violations committed by the Iran-backed Houthi militias in the country.

“We are surprised to see UN Head of Mission in Hodeidah and Chairman of Redeployment Coordination Committee, General Abhijit Guha silent towards the Houthi militias’ continued violations of the Sweden Agreement and their attack on the Mocha port, which is a civilian facility and on aid warehouses, endangering the lives of workers,” the minister said in a series of tweets.

He strongly denounced the “treacherous and cowardly terrorist attack”, saying the militias used four Iranian-made drones in their attack against the historic port of Mocha, where they burned the warehouses of a number of relief organizations operating on the west coast.

The attack took place a few weeks after the port had resumed operation.

“It represents a continuation of Houthi attacks against civilian location and the systematic destruction of infrastructure with an aim to take Yemen centuries back,” said the minister.

He noted that the attack coincides with the anniversary of 9/11 terrorist attacks against the United States. It again confirms that the Houthis are a terrorist organization similar to al-Qaeda and ISIS.

“The intensification of political and military pressure, in addition to designating the Houthis as terrorists remain the only way to establish security and stability in Yemen and the region,” Eryani said.

He called on the international community, the UN and US envoys to clearly condemn the Mocha attack, which comes days after the new UN envoy assumed his duties.

The attack must be deemed a war crime and part of the militias’ continued destruction of infrastructure and obstruction of aid to deepen the country’s humanitarian crisis, he added.