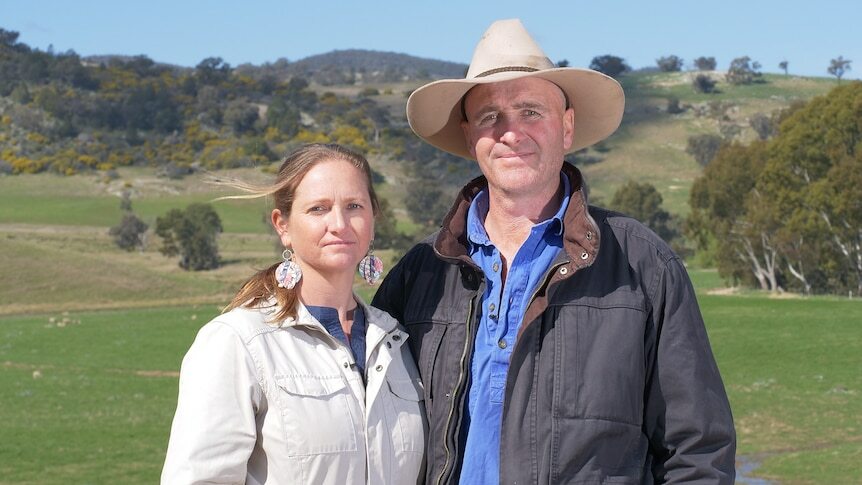 Farmers in the Southern Tablelands face inundation from a plan to raise the Wyangala Dam wall in the central west of New South Wales.

Kerri and John Webster run a mixed farming operation on the Lachlan River just upstream from the dam, and say their intergenerational farming business is under threat from the proposal.

Inundation maps show the low-lying floodplains of the Websters' farm will go underwater when the proposed new dam is full.

"This country is our powerhouse country. It's where your best lambs, your best beef, your best lucerne comes from and [if you] take that out, it's totally going to devastate our business," Mr Webster said.

The Websters said the NSW government was trying to flood one agricultural region to provide water further downstream.

"They're robbing Peter to pay Paul and we're going to be sacrificed in the process," Ms Webster said.

Upper Lachlan Branch of the NSW Farmers' Association chair Robyn Alders said there had been no consultation with farmers upstream of the dam and there were other more cost-effective ways to improve water security.

In the western Riverina, landholders and environmental groups have concerns that a larger dam could reduce natural flooding to nationally significant wetlands such as the Great Cumbung Swamp where the river ends.

From boom to bust

"[The Lachlan Valley] has previous to that been known as a safe lucerne growing area … [with] a lot of hay production and sheep production."

Mr Green said the region had been in a precarious situation with water during the past two major droughts and a bigger dam would help save more water during wet periods.

He said a larger dam would be a "game changer" for the region compared to alternatives like efficiency upgrades for the irrigation scheme.

"[The projects] won't provide, I don't believe, the level of change, a step-change in water security for everyone in the valley," he said.

The project would add another 650 gigalitres to the total storage capacity, an increase of more than 50 per cent.

Water NSW estimated the larger storage would yield, on average, an extra 21 gigalitres per year for general security water users.

A recent New South Wales Upper House parliamentary inquiry found the cost of the project could now be as high as $2 billion with no guarantee for how the shortfall in funding would be made up.

The state Water Minister Melinda Pavey said the final business case was still months away and changes to the biodiversity offset scheme were a "significant" reason for the cost blowout.

"So that's the major reason, there's been changes to the law from when the original price estimates were done," she said.

The biodiversity offset scheme was also responsible for significant cost increases with the plan to raise the Warragamba Dam wall, the main drinking water supply for Sydney.

Ms Pavey said the government was still fully committed to the Wyangala project despite the increased costs and delays.

Are dams worth the money anymore?

Water infrastructure expert Professor Stuart Khan, from the University of New South Wales, said while increasing the dam storage would capture more water for local farmers, that water would be at the expense of elsewhere.

"The thing we need to remember about the Murray-Darling Basin is that it's a fully allocated system — there's no spare water," he said.

"If we want to make more water available for one person, we'll be taking that water from some other use, be that an environmental use or be that an allocation somewhere."

Professor Khan also said a larger dam could reduce flows to the wetlands at the bottom of the river that were important for restoring groundwater reserves.

Professor Khan said it was important to wait for the final business case but as the cost of building dams increased, recycling water, managed groundwater recharging and efficiency programs could be more viable alternatives for improving water security.

"The further we go down the track of having built more and more of the next best dams, more of those alternatives are going to become increasingly favourable by comparison," he said.