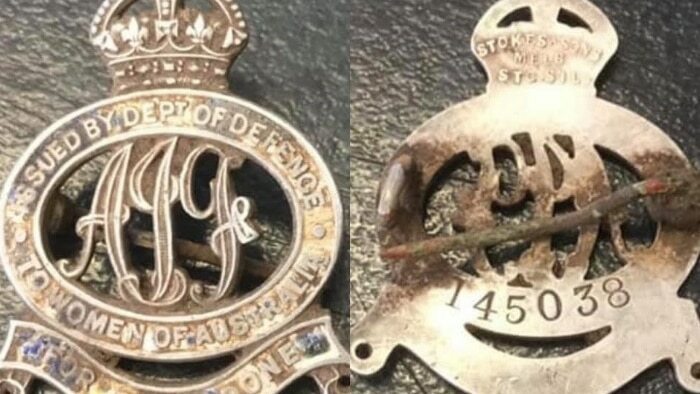 The discovery of a World War I badge by a metal detectorist has unearthed the heartbreaking story of a single mother who lost two sons in the conflict.

The badge will soon be returned to one of her grandsons after a detectorist spent a sleepless night trawling through the archives to find the owner of the medal and track down a living relative.

"It sounded like a good-sized target and I dug it up and realised it was a badge and it had a number on the back," he said.

Mr Sarossy shared his discovery on social media, which prompted fellow detectorist Karan Campbell-Davis to dig through online archives and track down the owner of the badge.

The female badges were issued to the nearest female relative, usually wives or mothers, of those who engaged in active service.

It was a complicated task for Ms Campbell-Davis, who lives in New South Wales, to work out who the original owner was from the number on the badge.

"It involved I think five hours trawling through book after book, just going through the numbers," she said.

"I was literally up all night. It's just one of those things [that] as you get the leads, the excitement just sort of builds."

Eventually, Ms Campbell-Davis was able to link the badge to Marion Cranswick from the small north-west Tasmanian town of Stanley, who lost two sons in the war.

Her son John Stewart Cranswick, known as Jack, was shot in his elbow during the landing at Gallipoli in 1915 and was returned to Australia to recover.

He returned to active service in 1916 along with his brother Thurstan George Cranswick.

John Cranswick was killed at 20 years of age in action in France on January 13, 1917 after a shell fragment pierced his back.

A year later, Thurstan Cranswick suffered a gunshot wound and was returned to Australia, but later died from tetanus.

After reading their service records, Ms Campbell-Davis felt like she knew the Cranswick sons.

"It was a very tragic story," she said.

"I really felt for Marion. It actually crossed my mind whether having lost her two sons, whether the badge had been accidentally lost or deliberately discarded as a result of her grief."

As she continued her research, she uncovered a letter from Ms Cranswick in the National Archives of Australia.

Ms Cranswick was responding to an inquiry as to where her sons' war medals should be sent.

"My husband deserted us 16 years ago," the letter read.

"I do not know whether he is still alive.

"It is many years since my husband contributed anything towards his children's support."

Ms Campbell-Davis said the letter was emotionally taxing to read.

"Emotionally this probably took more out of me than any other badge that I've researched," she said.

After his death in 1918, Thurstan Cranswick was buried in Launceston, in the same plot as his mother who died in 1936, with a tribute on the headstone to John Cranswick, who is buried in France.

Ms Cranswick was survived by her third son Richard.

Ms Campbell-Davis has asked the Tasmanian metal-detecting community to put flowers on the Cranswick grave on her behalf if ever they are passing through.

The detectorist community managed to track down a grandson of Ms Cranswick.

Thurstan Cranswick, 81, is named after his late uncle and now lives in Western Australia.

He said he was surprised to hear that a badge had been found belonging to his grandmother.

The badge is yet to be returned to him as detectorists continue their search for a missing part.

"If you lose two sons or three sons they get an additional piece to it so that it is what they've gone to look for," Mr Cranswick said.

"It's a pity I never met my uncles but I carry the name and I respect the name."

Marion Cranswick's great-great niece, Jeanette Jackson said she was thrilled the badge that belonged to her late relative had been found.

"I am very grateful to the [detectorists] that they make a real effort to return property to the next of kin," she said.

As for how the badge wound up in the Tasmanian town of Hamilton, relatives say the younger brother of Jack and Thurstan lived there during the 1930s and their mother would travel from Hobart to visit him.

This final piece of the puzzle gave comfort to Ms Campbell-Davis.

"I figure that she would have still been wearing it [the badge] even 10 years after the war had finished," she said.

"So on the contrary, the badge hadn't been discarded, she was still wearing it with pride the same as my great grandmother did.