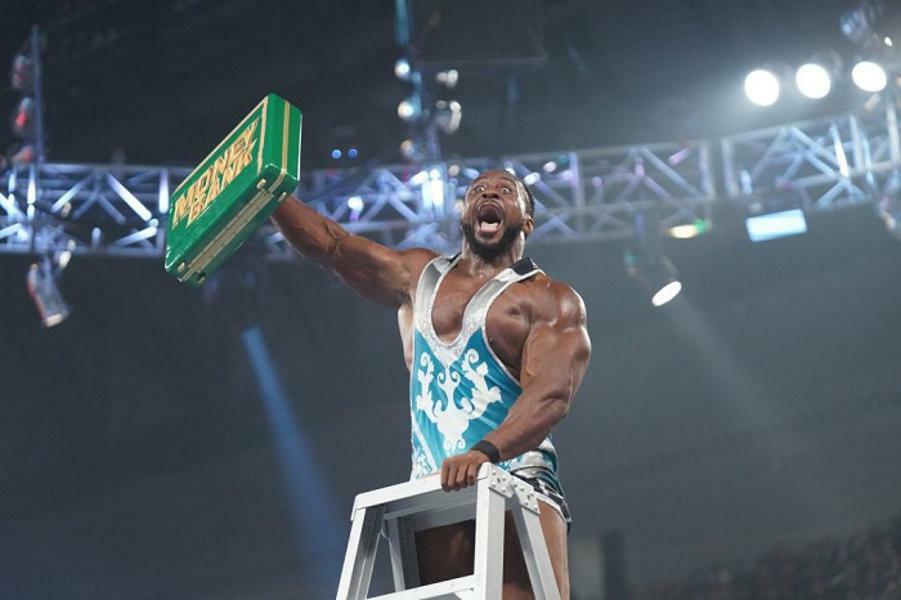 Big E beat Bobby Lashley for the WWE Championship on WWE Raw after taking to Twitter to declare he was cashing in his Money in the Bank contract.

Big E made good on that promise by cashing in his Money in the Bank contract following a Bobby Lashley win over Randy Orton in a very good main event. Lashley (kayfabe) injured his knee after delivering a spinebuster on Orton through a table, opening the door for Big E to opportunistically cash in. After heading to commercial break prior to making the match official, WWE returned as Big E defeated a hobbled Lashley with a Big Ending in a matter of minutes.

Big E announced the surprising news shortly after WWE Raw made a surprising change of its own by booking Randy Orton to challenge Bobby Lashley for the WWE Championship.

After dedicating much of last week’s show to determining a No. 1 Contender for the Raw Tag Team Championship through a Tag Team Turmoil Gauntlet, Raw called an audible with Randy Orton vs. Bobby Lashley for the WWE Championship. This match was originally supposed to be a top match for WWE Extreme Rules, however WWE once again scrapped plans, which has become par for the course for a topsy-turvy Raw franchise.

Coming off a week where Raw lost to AEW Dynamite in the 18-49 viewership, Raw trended toward a hot-shot show with not only Big E looming, but another open challenge from rising star Damian Priests’ United States Championship. Jeff Hardy, who went viral for competing in the 24/7 division last week, answered the challenge. Raw also advertised Charlotte Flair vs. Shayna Baszler, Rhea Ripley vs. Natalya and an eight-man tag team match pitting The New Day, Mustafa Ali and Mansoor against T-BAR, MACE, AJ Styles and Omos.

Bobby Lashley made sure to continue to tease his Lashley-Lesnar dream match by chiming in with “I’m not...” when MVP accused Big E of being afraid of Brock Leshar.

Why Big E didn’t bother to cash in his Money in the Bank briefcase after Bobby Lashley took an RKO is almost as confusing as why none of the announcers brought this to the viewers’ attention.

Nia Jax told Shayna Baszler that the two need to get on the same page, which is a laughable response after Baszler cost her the WWE Raw Women’s Championship. At that point, there are no peace talks.

As expected, Nia Jax cost Shayna Baszler this match, which will lead to a feud of women not good enough to be Raw women’s champion.

Charlotte Flair had the line of the night to this point of the show when she said “I don’t collect dolls, I collect championships.”

Charlotte really played these fans like a fiddle in taking her own sweet time to open a gift box. What was inside turned out to be a Charlotte Flair-inspired doll named Charly, which was more over than half of the women’s roster.

Fans really connected with Alexa Bliss and her doll gimmick, which is going to infuriate aging male wrestling fans who just want WWE to lean into the indies.

Drew McIntyre and The Viking Raiders vs. Jinder Mahal, Veer and Shanky

Despite being attacked before this match, in what I thought was going to be yet another loss for McIntyre, Drew McIntyre ran wild through the opposing team like a hot sword through butter.

McIntyre won this match virtually by himself, seemingly to make up for all the losing he’s been doing lately.

Jeff Hardy received a rockstar reaction and was the overwhelming babyface throughout this match. And I don’t think this crowd was even trying to show up WWE, they were just cheering for Jeff Hardy the way they have been since WWE went back on the road, why? Because he’s Jeff Hardy.

Jeff Hardy constantly seems to be booked on opposite ends of the narrative spectrum. Nobody wants to see him running around with the 24/7 guys, but those same people would be upset if he beats a young up-and-comer. It’s like all Jeff Hardy can do without facing backlash is beat Sheamus.

Tamina connected on an open-hand slap and Corey Graves put it over more than most punches.

The finish was botched as the referee counted the three despite Tamina kicking out at two.

This match may have had a hiccup or two, but Natalya and Rhea Ripley worked their tails off throughout with a plethora of moves.

Nikki A.S.H, who was attacked earlier in the night, helped fellow babyface Rhea Ripley cheat to win this match.

Mansoor danced with The New Day while Mustafa Ali hung his head in embarrassment. I really hope this Ali-Mansoor gets a proper payoff.

If WWE let MACE and T-BAR destroy the rest of the roster the way they destroy Mustafa Ali and Mansoor every week, they might be top guys.

This match built to a monster hot tag by Omos who made quick work of Mansoor and Ali.

WWE should do a better job explaining why it is Doudrop now dances to and from the ring.

Eva Marie tried to roll up Doudrop to no avail and the finish came shortly after.

Karrion Kross’ otherwise well-produced pre-taped promo seemed to go on forever and barely got its point across.

Early on in this match, Randy Orton and Riddle were using more outside interference than Bobby Lashley and MVP were.

These fans were going to be behind Randy Orton regardless, but Riddle did a great job of rallying them behind Orton. His ringside antics deserve some type of award, he was a next-level hype man.

Bobby Lashley destroyed everything in sight and then Big E went to cash in, which is the opposite of the ideal conditions to cash in. Thankfully for Big E, Bobby Lashley suffered a leg injury beforehand.

WWE shrewdly went to commercial prior to making this Money in the Bank cash-in official.