WRC Portugal: The Good, The Bad and the emergence of a future legend

Kalle Rovanpera was described as a “miracle kid” after pulling off an against the odds win in Croatia last month, and now he's being likened to the WRC’s all-time greats Sebastien Ogier and Sebastien Loeb. That is the level Rovanpera is operating at currently.

At only 21-years-old the Finn has five WRC wins to his name and has won five of the last 10 WRC events, stretching back to his maiden win in Estonia last year. It’s a frightening statistic. Only Hyundai duo Thierry Neuville and Ott Tanak of the current crop have accrued more career wins.

PLUS: How Rovanpera overcame rallying royalty in Portugal

Before Portugal, Rovanpera ticked off two crucial requirements in a quest to become a world champion; those being scoring wins on tarmac, gravel and snow, and winning from starting first on the road, which he achieved on Croatia’s asphalt in April.

That left one final element that has been turned into an art form by Loeb and Ogier - winning a gravel rally from opening the road. In Portugal this objective seemed unlikely especially given Ogier and Loeb were among the 12 Rally1 car field, with the pair boasting a far more favourable road position.

However, Rovanpera is so at one with his driving and the GR Yaris, he surprised himself and his team to emerge victorious in Portugal. Granted, several of his rivals suffered from punctures and mechanical issues from extremely punishing stages, Rovanpera did have to see off Toyota team-mate and long time leader Elfyn Evans, no mean feat there.

Evans produced his best showing of the season to date and last year’s Portugal winner looked in a good potion to score back-to-back wins, until Rovanpera pulled of a masterstroke when rain fell in the second pass of the rally’s longest stage. Here, Rovanpera was able to transform a 9.9s deficit, that had earlier blown out to 18.4s, into a 4.0s lead. From there, he was in control taking a third consecutive win.

There is no other way to describe Rovanpera’s performance than 'flawless', earning him a third top performer award of the season. Equipped with a 46 point lead over Hyundai’s Thierry Neuville, the lead poses an incredibly hard task for the rest of the field to reel him in. At this stage it's increasingly likely that the youngest ever world champion will be crowned this year.

His team boss Jari-Matti Latvala was quick to dig out the plaudits.

“Once again he [Kalle] has surprised us because we didn’t expect him to win, as he was first car on the road, but he did it,” Latvala told Autosport.

“Elfyn was driving really well fighting for the victory and putting the pressure on Kalle, but this time Kalle found more performance.

"It [Kalle’s victory in Portugal] reminds me of the dominance of Sebastien Ogier back in the 2013 when he was driving the Volkswagen for the first time [when he won his first title].

“He was putting all the other drivers under pressure and Kalle has now done the same and it very difficult when a driver is in what I call the flow zone. It is very difficult for the others to beat him and he has found that.”

While Evans deserves huge credit for his drive to second, Hyundai’s Dani Sordo and Toyota’s Takamoto Katsuta receive the honourable mentions this week.

Portugal represented Sordo’s first start in a Rally1 car and despite struggling to get to grips with the i20 N that saw him loose grip of third place, his experience and guile came to the forefront on the Sunday. The Spaniard reeled in and overhauled Katsuta on the final stage to snatch a deserved podium - his sixth career rostrum in Portugal.

While his driving did the talking, his excellent sportsmanship was displayed in front of the thousands of fans packed into the Fafe finale, when he rushed across to embrace a gutted Katsuta, who was dejected sat in the cockpit of his GR Yaris at the finish.

Although heartbroken to lose a podium a Toyota 1-2-3 lockout, this was by far Katsuta’s best drive since finishing second at the Safari Rally almost 12 months ago. The Japanese driver appears to have got his confidence back, with his only blemish a half spin during Friday afternoon.

It was very close to being a perfect weekend for Toyota, barring Sebastien Ogier’s uncharacteristic early exit from the rally and Takamoto Katsuta missing out on securing a 1-2-3 podium lock-out.

Toyota once again outlined the importance of a reliable car as only one of its four-car fleet encountered any issues. Ogier reported a hybrid issue on Saturday which led to the eight-time world champion being distracted before crashing out of Stage 11 following his return from a double puncture on Friday.

Whereas Hyundai and M-Sport Ford suffered a fair share of heartache on the reliability front highlighted by a driveshaft failure for Neuville, and brake and turbo charger issues for M-Sport.

The GR Yaris has now clearly established itself as the car to beat from the new Rally1 generation of vehicles, with Toyota holding a commanding 59-point lead.

Rally Portugal produced several ‘what could have been’ stories and perhaps none were more frustrating than what happened to Neuville.

Sitting second overall and only 7.0s adrift of leader Evans, the Belgian was well and truly in the hunt for a first victory of the season when Hyundai’s poor reliability record made an untimely appearance.

Neuville suffered a driveshaft failure on a road section that required a repair undertaken by himself and co-driver Martijn Wydaeghe. The pair then had to limp through the final two stages of Friday with their hopes of victory destroyed. Neuville hauled himself back up to fifth by the end of the rally.

The last time both Ogier and Loeb retired from a rally on the same day was at Rally Australia in 2011. It’s fair to say such a situation is a collector's item.

However, in Portugal, the two greatest drivers of all time made rare driving errors a situation that among rallying circles was thought unthinkable.

Loeb slid into a wall on Stage 5 ripping the right rear suspension from his Ford Puma just moments after winning Stage 4 to take the outright rally lead from Evans. Retirement swiftly followed as Ogier climbed to third overall after claiming the stage where his rival had fallen.

Ogier’s hopes of a sixth career Portugal in were dashed when he picked up punctures in the next tests and was out of the rally having elected top carry only one spare wheel.

The pair returned to action on Saturday but a turbo charger issue put Loeb out of the rally entirely, while Ogier was distracted by his dash which prompted a rare crash on Stage 11.

Round up a bunch of the world’s greatest rally drivers in a room from the last 50 years and you are set for an unforgettable evening.

That’s exactly what eventuated for the World Rally Championship’s 50th anniversary season celebrations at Rally Portugal last weekend. The WRC went to significant lengths to celebrate its milestone, organising a special gala dinner for 250 guests, including Autosport, on the Wednesday night before the rally. You couldn’t help but bump into legendary drivers, co-drivers and team bosses and even a priceless rogue Colin McRae driven 1999 Safari Rally winning Ford Focus.

In today’s fast-paced world it can be easy to focus on the present and the future and forget about the past. So it was refreshing to be able to spend an evening being nostalgic and remembering the WRC's history and its great stories retold by its many legends all in them same room together.

While the gala dinner was the centrepiece of the celebrations, the hoards of fans that flocked to Portugal were able to quench their nostalgia thirst, courtesy of demonstration runs from the fleet of historic WRC machinery across the rally’s spectator friendly super special stages.

Arguably the sight that provoked the most fever was seeing Rohrl reunited with an Audi Quattro for a run of the legendary Fafe stage.

“It was fantastic even the road was very rough. I had to take care of my tyres, but it was a lot of fun.”

It appears nobody is safe around Hyundai's Dani Sordo as WRC All Live reporter Julian Porter found out.

Porter and the WRC All Live team had to improvise when they welcomed Gronholm to join them to assist with commentary. 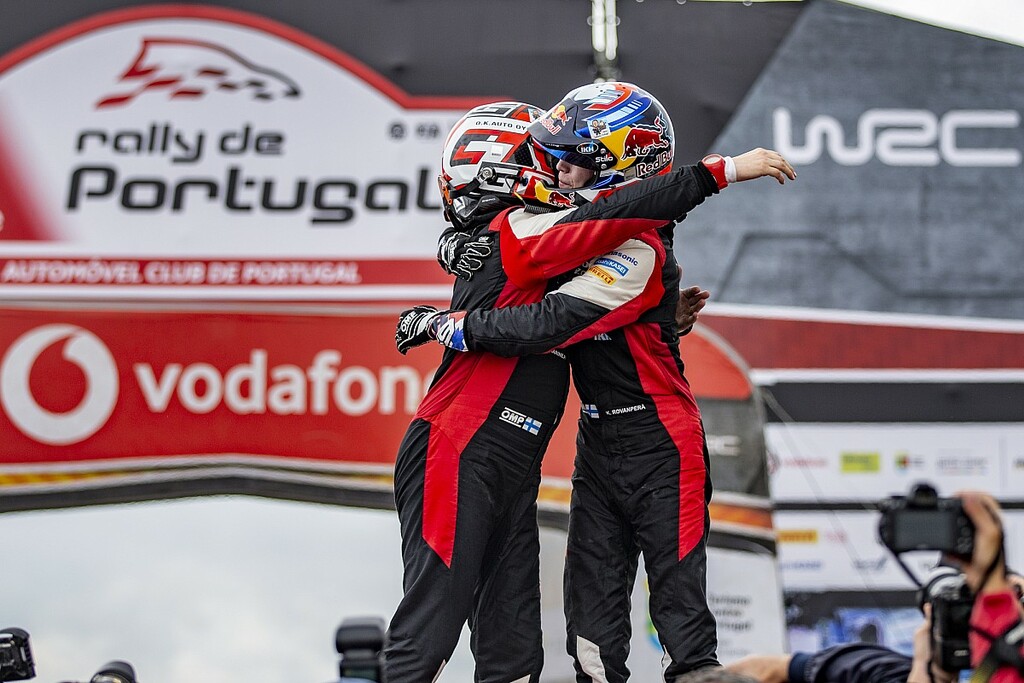 Motorsport
One subscription that gives you access to news from hundreds of sites
Latvala: Rovanpera Portugal WRC victory reminiscent of a dominant Sebastien Ogier