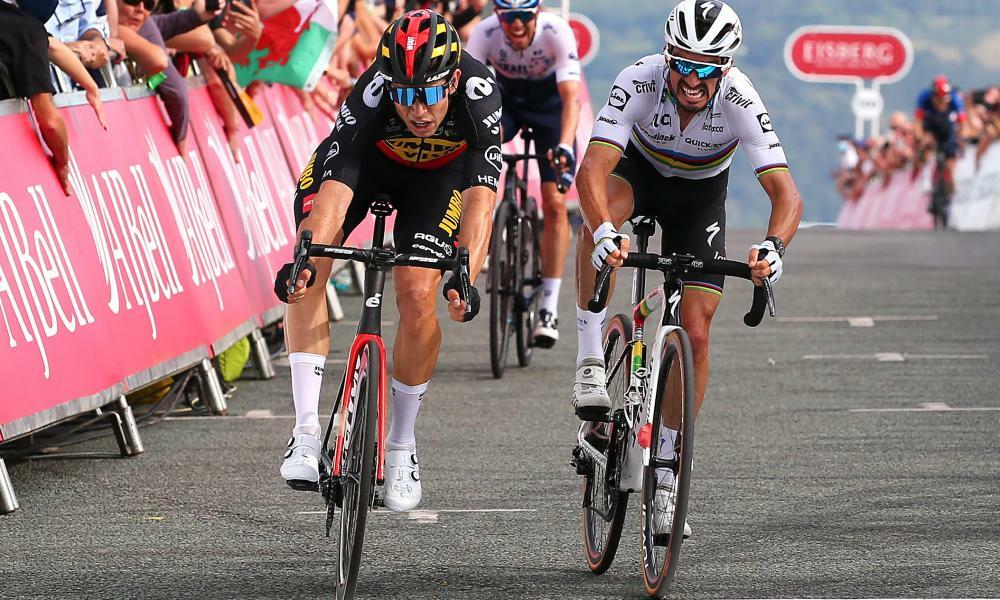 The duel between Wout van Aert and Julian Alaphilippe at the Tour of Britain has gone decisively the way of the Belgian in the first half of the race but, although Van Aert took his second stage win in four days atop the Great Orme peninsula at Llandudno, regaining the race lead, the Frenchman ran him close and a repeat of his 2018 overall win is tantalisingly within reach.

Not far behind the pair thanks to a mature display of controlled riding, the 22-year-old Londoner Ethan Hayter came within a whisker of retaining his overall lead at the toughest finish of the race. With only a 2sec deficit to Van Aert he has a chance of snatching it back on Thursday’s run through Cheshire.

With a fair wind behind them, Van Aert and Alaphilippe should be hot favourites for the world road race title in Belgium in two and a half weeks and the sprint finish on the Orme was worthy of a world championship. The backdrop was spectacular: scree slopes, caves, a litter of boulders and massive crags, although the wild goats that invaded Llandudno from the Orme during lockdown mercifully kept out of the way.

Hayter’s Ineos Grenadiers teammates controlled the initial climb out of Llandudno at the start of the loop around the headland, and the first part of the final steep ascent to the line, with the tramway to the riders’ right, whittled the lead group of around 50 down to three with a kilometre remaining: Van Aert, Alaphilippe and the Canadian Michael Woods, with Hayter riding at his own pace a few metres behind.

As the gradient eased and the lead trio stalled and feinted, the race leader rejoined them with 300m to the line, along with Alaphilippe’s teammate Mikkel Frølich Honoré, who launched the sprint finish for his leader. Alaphilippe sprang clear with 150m to go, Van Aert clawed his way up to his wheel 50m later and drew level with 50m left, pulling clear only as the chequered flag approached.

Earlier, the stage had travelled north via the Irish Sea coast and Snowdonia, with Jake Scott of the Canyon dhb SunGod team making his presence felt in an early escape for the third road race stage out of a possible three. His ability to sniff out each day’s break means his chances of taking either the king of the mountains or the intermediate sprint prize at the end of the week are good.

The overall standings are harder to predict. Hayter finished 8sec behind Van Aert in fifth place, with the Belgian reclaiming the blue leader’s jersey thanks to the 10sec time bonus for the stage win. Only 11sec now separates Van Aert and Alaphilippe, who lies third. One of this trio should win in Aberdeen on Sunday, and it could be nip and tuck all the way.

Meanwhile, Thursdaytoday’s intermediate sprints at Congleton, Wilmslow and Chelford all carry bonuses of three, two and one second for the first three, and it will be in the interest of Hayter to contest them; the finish in Warrington, however, is one ear-marked by Mark Cavendish.