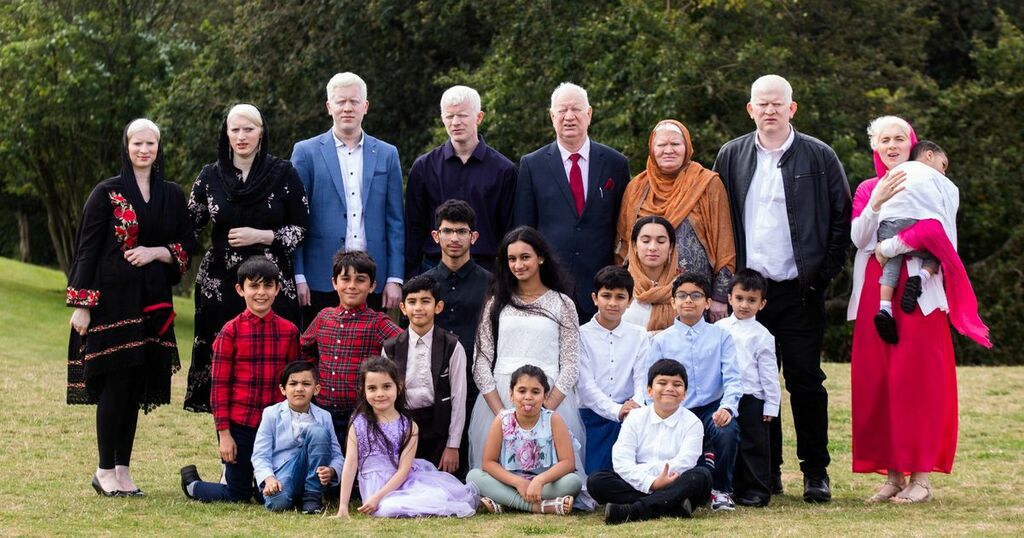 A British family has secured a Guinness World Record - for the largest number of siblings with albinism.

The Parvez family, who live all around the UK, have six siblings with albinism, meaning their skin and hair is white.

Naseem, 42, Ghulam, 40, Haider 38, Muqadas, 36, Musarat, 30, and Mohammed, 27 are from what's thought to be the largest albino family in the world, with 15 albino members across their extended family.

The siblings say the cruel bullying and discrimination they've received over their different appearance has brought them closer together over the years.

Naseem Akhtar, who entered the family for the record, said: "It was amazing to hear we'd got the record - my siblings were very excited to hear the news when I told them.

"It's really hard to break a record and it involves a lot of paperwork, but it's all paid off.

"It is a big boost in self esteem and confidence for the family - we should be proud of who we are.

"Finding out was a very emotional moment for us all - and it's something we should have done a long time ago.

"I can't wait for us to soon meet up and celebrate."

The siblings inherited albinism from their parents, Aslam, 64, and wife Shameem, 65, who both have white skin due to the condition.

All six of their children have albinism, as well as some of their siblings, nieces and nephews - with the family spread between Coventry and Exeter.

Naseem, an NHS rehabilitation officer, said the family are proud of their identity despite facing discrimination in the past. They want to educate others on the condition.

She said: "Throughout our lives, my family have put up with a lot of bullying and discrimination for the way we look and who we are, as well as having to cope with sight loss.

“As a family, we never fit into the community - we had dog poo on our doorstep, our windows were smashed, and we even once had fireworks pushed through the letterbox.

“But now I'm proud of who we are - people will always have things to say, but you don't have to listen.

"I'm very passionate about educating people about this condition so they can understand what it is, and the impact it can have on the lives of those affected."

She applied for a Guinness World Record because she wanted the family's unique identity to be "marked in history."

At 11 years old, Aslam moved to the UK from Pakistan. When he became an adult, he and his brother were matched in marriage with Shameem and her sister, who both has albinism. Sadly, Shameem's sister has since passed away.

Aslam's brother had seven children - four of whom have albinism, although one passed away.

Two of the parents' non-albino siblings also had albino children - three in total coming from non-albino parents - bringing the total up to 15.

Naseem and her siblings, who are all partially sighted, had a difficult childhood and faced bullying at school and in their mosque.

She said: "As kids, we would never be invited to birthday parties. We were always the last people to be picked for school sports teams because of our sight loss.

"We were constantly rejected from groups - none of us really had any friends.

"People at school and in the street would refer to us as 'P*ki albinos' which was so offensive.

"Even at the mosque, within our own community, people would steal our shoes whenever we took them off to pray. I often walked home barefoot."

She added the family lived in "constant terror" that their house would be targeted.

Naseem, who is married with children Dylan, 11, Oliver, nine, and Grace, six, works in a sight loss rehabilitation service.

Between Naseem and her five siblings, they have 14 children - but not one of them carries the recessive genetic condition - oculocutaneous albinism (OCA). She says she's thankful the next generation of the family doesn't suffer from sight loss.

She said: "Just like any disability, sight loss is not easy to deal with, no matter how optimistic you are."

Now that her family has smashed the world record, Naseem wants to use her platform to educate others about albinism.

Got a story? Email jessica.taylor@reachplc.com

She said: "I've always tried to promote positivity about albinism - even though we look very different and can't see, doesn't mean we're less of a person or don't have the right to have a good life.

"After so many years of being put down and feeling like you don't fit in anywhere, it has a huge impact - but you have to learn to overcome negativity.

"We can't change who we are, so we should see it as a gift."