The tide of international opinion appears to be decisively shifting against Russia, as a number of non-aligned countries are joining the United States and its allies in condemning Moscow’s war in Ukraine and its threats to the principles of the international rules-based order.

Western officials have repeatedly said that Russia has become isolated since invading Ukraine in February. Until recently, though, that was largely wishful thinking. But on Tuesday, Wednesday and Thursday, much of the international community spoke out against the conflict in a rare display of unity at the often fractured United Nations.

The tide had already appeared to be turning against Putin even before Thursday’s U.N. speeches. Chinese and Indian leaders had been critical of the war at a high-level summit last week in Uzbekistan. And then the U.N. General Assembly disregarded Russia’s objections and voted overwhelmingly to allow Ukrainian President Volodymyr Zelenskyy to be the only leader to address the body remotely, instead of requiring him to appear in person.

That shift against Russia accelerated after President Vladimir Putin on Wednesday announced the mobilization of some additional 300,000 troops to Ukraine, signaling the unlikelihood of a quick end to the war. Putin also suggested that nuclear weapons may be an option. That followed an announcement of Russia’s intention to hold independence referenda in several occupied Ukrainian regions with an eye toward possible annexation.

Those announcements came at the very moment that the General Assembly, considered the premier event in the global diplomatic calendar, was taking place in New York.

Numerous world leaders used their speeches on Tuesday and Wednesday to denounce Russia’s war. That trend continued Thursday both in the assembly hall and at the usually deeply divided U.N. Security Council, where, one-by-one, virtually all of the 15 council members served up harsh criticism of Russia – a council member -- for aggravating several already severe global crises and imperiling the foundations of the world body.

The apparent shift in opinion offers some hope to Ukraine and its Western allies that increasing isolation will add pressure on Putin to negotiate a peace. But few are unduly optimistic. Putin has staked his legacy on the Ukraine war and few expect him to back down. And, Russia is hardly isolated. Many of its allies depend on it for energy, food and military assistance and are likely to stand by Putin regardless of what happens in Ukraine.

Still, it was striking to hear Russia’s nominal friends like China and India, following up on last week’s remarks, speak of grave concerns they have about the conflict and its impact on global food and energy shortages as well as threats to the concepts of sovereignty and territorial integrity that are enshrined in the U.N. Charter.

Only one country, Belarus, a non-council member and Russia ally that was invited to participate, spoke in support of Russia, but also called for a quick end to the fighting, which it called a “tragedy.”

“We hear a lot about the divisions among countries at the United Nations,” Secretary of State Antony Blinken said. “But recently, what’s striking is the remarkable unity among member states when it comes to Russia’s war on Ukraine. Leaders from countries developing and developed, big and small, North and South have spoken in the General Assembly about the consequences of the war and the need to end it.”

“Even a number of nations that maintain close ties with Moscow have said publicly that they have serious questions and concerns about President Putin’s ongoing invasion,” Blinken said.

Chinese Foreign Minister Wang Yi was careful not to condemn the war but said that China’s firm stance is that “the sovereignty and territorial integrity of all countries should be respected. The purposes of the principles of the U.N. Charter should be observed.”

Indian Foreign Secretary S. Jayashankar said “the trajectory of the Ukraine conflict is a matter of a profound concern for the international community.” He called for accountability for atrocities and abuses committed in Ukraine. “If egregious attacks committed in broad daylight are left unpunished, this council must reflect on the signals we are sending on impunity. There must be consistency if we are to ensure credibility,” he said.

And Brazilian Foreign Minister Carlos Alberto Franca said immediate efforts to end the war are critical. “The continuation of the hostilities endangers the lives of innocent civilians and jeopardizes the food and energy security of millions of families in other regions, especially in developing countries,” he said. “The risks of escalation arising for the current dynamics of the conflict are simply too great, and its consequences for the world order unpredictable.”

“Russia’s actions are blatant violation of the Charter of the United Nations,” said Albanian Foreign Minister Olta Xhacka. “We all tried to prevent this conflict. We could not, but we must not fail to hold Russia accountable.”

Mexican Foreign Secretary Marcelo Ebrard called the invasion a “flagrant breach of international law” and Irish foreign minister Simon Coveney said: “If we fail to hold Russia accountable we send a message to large countries that they can prey on their neighbors with impunity.”

He repeated a long list of Russia’s complaints about Ukraine and accused Western countries of using Ukraine for anti-Russia activities and policies.

“Everything I’ve said today simply confirms that the decision to conduct the special military operation was inevitable,” Lavrov said, following Russian practice of not calling the invasion a war.

Russia has denied being isolated and the foreign ministry used social media to publicize a number of apparently cordial meetings that Lavrov has held with foreign minister colleagues at the UN in recent days.

Still, Blinken and his colleagues from other NATO nations seized on what they believe to be growing opposition to and impatience with Putin.

And, several speakers, including Ukrainian Foreign Minister Dmytro Kuleba and British Foreign Secretary James Cleverly, pointed out that Lavrov skipped the meeting except for his speaking slot. 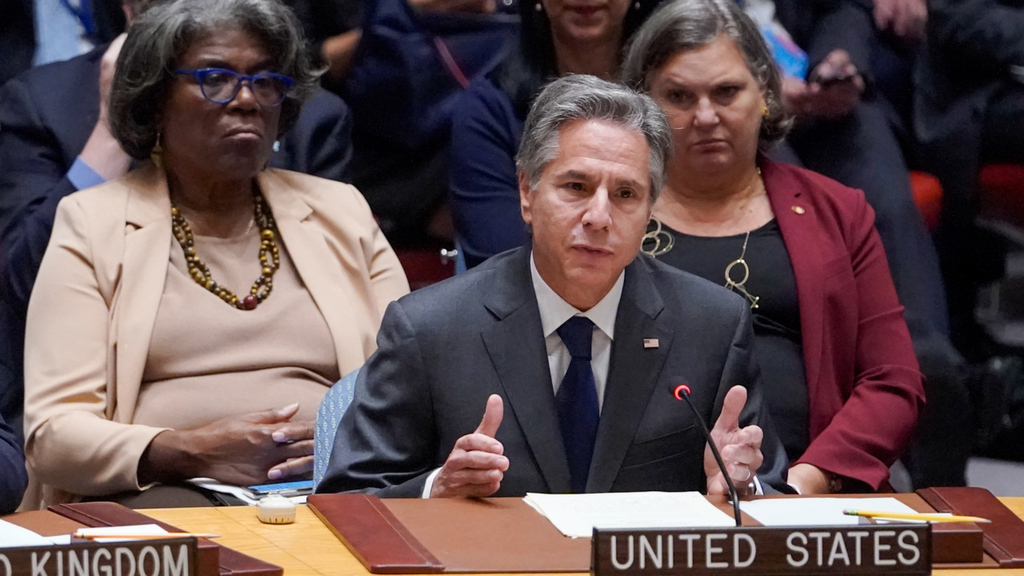 Politico
From analysis to the latest developments in health, read the most diverse news in one place.
Lavrov defends Russia at U.N. showdown rife with anger over Ukraine war

Russian Foreign Minister Sergei Lavrov defended Moscow's war in Ukraine at the U.N. Security Council on Thursday as the United…

Al Jazeera
On Ukraine, Russia repeats insistence that it had no choice

The Independent UK
One place to find news on any topic, from hundreds of sites.
GLIMPSES: Lavrov's quick entrance and exit at United Nations