World needs to ‘come together more than ever’, says Chinese foreign minister 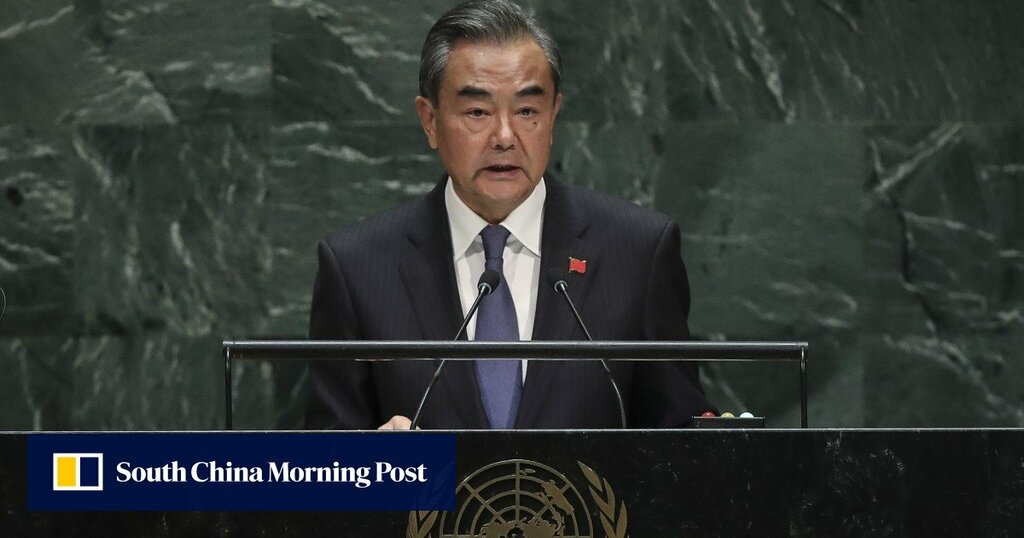 Foreign Minister Wang Yi has promised that China will become a pillar of “an open world economy” and help to fight global public health crises while upholding peace and stability, in a speech that reaffirmed the country’s commitment to a multilateral international system.

He warned that the world was at a historical crossroads, amid growing concerns that the spiralling superpower rivalry and coronavirus crisis have further weakened the United Nations and other global institutions.

At an event to mark the 50th anniversary of Beijing’s assumption of China’s permanent seat on the UN Security Council, previously held by Taiwan, Wang said that greater efforts should be made to strengthen UN-centred multilateralism in tackling unprecedented challenges such as global warming.

“Under the combined impacts of changes and a pandemic both unseen in a century, human development now faces multiple crises and the global governance system is undergoing profound adjustment,” he said.

“Now more than ever, the international community needs to come together to meet the challenges and promote common development.”

But almost in the same breath, Wang accused “a few countries” of resorting to bullying while using multilateralism as a pretext to impose their own rules on others – a thinly veiled shot at the United States and its allies.

“Arbitrary unilateral sanctions or the use of force will only prolong hatred and perpetuate wars. No one will come out as a winner,” he said.

In contrast, he said, “China will stand, as always, on the side of peace and justice … commit to the vision of common, comprehensive, cooperative and sustainable security at the global level, and build a world of enduring peace and common security.”

Wang also vowed to embrace “openness and inclusiveness to develop an open world economy”, despite concerns about the rise of protectionism, China’s inward-looking economic policies and the accelerating decoupling of the world’s two largest economies.

“We need to safeguard the multilateral trading system with the WTO as its cornerstone, ensure the stable and smooth operation of global industrial and supply chains, and work … to bring the global economy onto a path of strong, sustainable, balanced and inclusive growth,” he said.

“Deglobalisation that opts for closing doors and decoupling serves no one’s interest and will only lead to a dead end.”

The foreign minister also told the event in Beijing that China would continue to promote its Belt and Road Initiative, a transcontinental infrastructure project which, he said, now covered 141 countries and 32 international organisations and would “inject more impetus into global recovery and growth”.

He said Beijing would honour President Xi Jinping’s pledges to provide 2 billion doses of coronavirus vaccines to the world this year and donate US$100 million to help “the fair and equitable distribution of vaccines” globally.

Wang also warned that efforts to trace the origins of Covid-19 should not fall victim to an approach based on a “presumption of guilt or motivated by political manoeuvring”, suggesting the US campaign for an inquiry focusing on China was “doomed to fail”.

He also detailed China’s international contributions since “the restoration of the lawful seat” in 1971, including the self-claimed victory of eliminating absolute poverty last year, more than 10,000 aid projects covering 160 countries and becoming a top contributor to UN peacekeeping missions.

In Wang’s words, China has served as “an important builder of world peace, the biggest contributor to global development, and a firm defender of international order”.

The rise of China and its expanding influence at the UN and other multilateral bodies have given rise to concerns that a form of multilateralism with “Chinese characteristics” will come to dominate the world order.

“Since [the foundation of the UN] the balance of power has changed to the benefit of China, but whether that country eventually will take up the influential role that US once had remains uncertain,” said Frans-Paul van der Putten, a senior research fellow at the Clingendael Institute, a Dutch think tank.

“This situation of uncertainty could last a long time. In the meantime, US-China rivalry is likely to deepen and progressively limit the effectiveness of international organisations.”

But according to former US diplomat Jeffrey Feltman, who served as under-secretary general for political affairs at the UN between 2012 and 2018, concerns that China is transforming the UN from within “seem if not overblown, at least premature”.

“Whatever its ambitions, China has not replaced the United States as the UN’s most powerful member state,” said Feltman, a visiting fellow at the Brookings Institution. “The UN can be characterised as ‘home turf’ for the United States, but walking off the field will facilitate China moving in to fill the vacuum.”