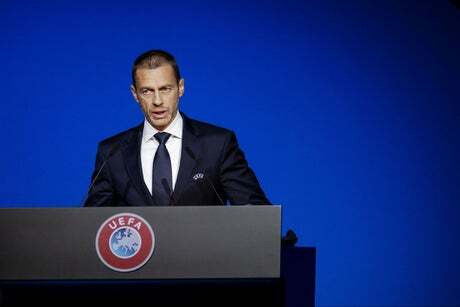 Ceferin also suggested that European and South American countries are prepared to boycott the event should controversial plans be pressed ahead with, and accused Fifa of a failing to communicate properly.

Arsene Wenger, now Fifa’s head of global development, has proposed a new football calendar featuring a major international tournament every summer and the World Cup and Euros on alternate years.

“I hope they [Fifa] will come to their senses, because I don’t see the right approach to go everywhere except the confederations, not to speak to us,” Ceferin told The Times.

“They didn’t come, they didn’t call, I didn’t get a letter or anything. I just read in the media.

“To play every summer a one-month tournament, for the players it’s a killer. If it’s every two years it clashes with the women’s World Cup, with the Olympic football tournament.

“The value is precisely because it is every four years, you wait for it, it’s like the Olympic Games, it’s a huge event. I don’t see our federations supporting that.”

Wenger’s proposals include fewer qualifying fixtures, with the former Arsenal manager citing the fact that 133 nations have never played in a World Cup.

He believes his ideas may allow them the chance to do so, and has suggested that “more meaningful games” are desired by today’s football audience.

While famous footballing figures including former Brazil international Ronaldo have come out in favour of Wenger’s plans, Ceferin is one of a number of key protagonists to have expressed scepticism.

“It might be good for Uefa financially but the problem is we would be killing football like that. We are killing the players. I don’t see the clubs allowing the players to go and that would divide us completely,” continued the Slovenian.

“We can decide not to play in it. As far as I know, the South Americans are on the same page. So good luck with a World Cup like that.

“I think it will never happen as it is so much against the basic principles of football.”

It is not the first time that Ceferin and Uefa have reportedly clashed with Fifa this year.

Ceferin’s successful attempts to block the proposed European Super League are alleged to have caused conflict with Gianni Infantino, president of the global administrative body.