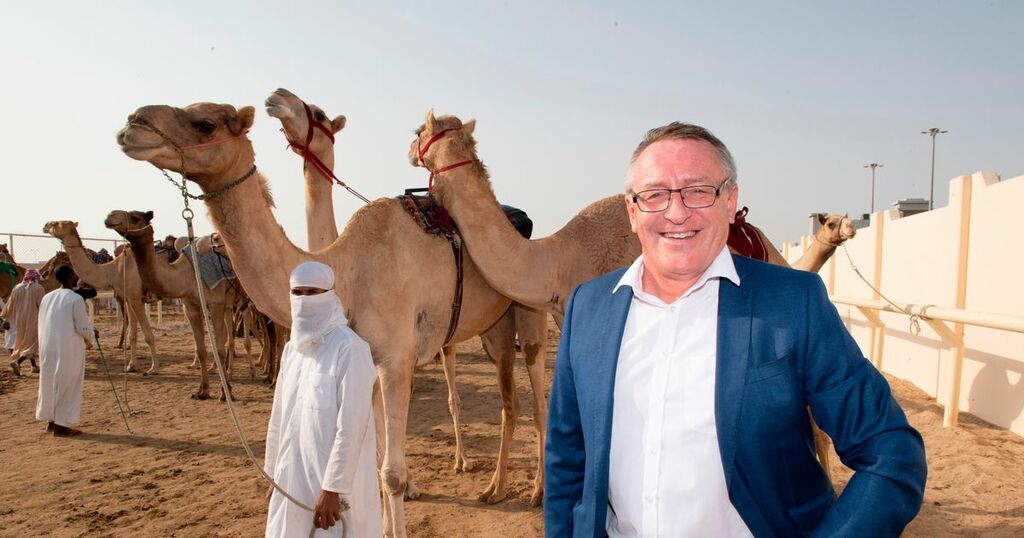 Football fans will descend on one of the most bizarre countries on Earth next summer.

Three Lions supporters at the most controversial World Cup ever will need meticulous planning to find affordable accommodation, and booze.

The Qataris are expecting 1.1 million fans to visit their country, which is barely more than half the size of Wales.

Supermarkets don’t sell beer but there will be “fan zones” dotted around the capital Doha where beer will be on sale at £5 a pint.

The zones will be sealed off by high fences and screens.

Qatar is also planning a huge new campsite in the desert and two giant cruise ships to accommodate football fans from around the world.

The Emir of Qatar

He was educated at Sherborne College in Dorset, Harrow in North London and Sandhurst Military Academy, Berkshire.

He has urged locals to show “openness and tolerance” to England supporters.

One FIFA source said as long as supporters “show respect to local customs” they will be “very welcome”.

If fans are caught being drunk or urinating in public they will be taken to Doha’s notorious Central Jail.

Their head will be shaved before they appear before a magistrate. Under Qatar law they could face flogging but it’s more likely they will be deported.

It may be a deeply conservative country but scratch the surface and it’s party central. While it’s not as wild as Dubai, there is a frenetic fun scene in the happy hours of posh international hotels.

The stadiums and metro system are fantastic. Local restaurants are cheap and there are branches of McDonald’s, KFC and Pizza Hut everywhere.

There is very little crime and no ­graffiti or litter to be seen anywhere.

Many of the local Qataris and migrant workers speak English.

Road and metro signs across the capital are in English.

Ubers are plentiful and cheap, and if you do rent a car, petrol costs just 34p a litre.

The weather next November and December is likely to be the same as a hot English summer’s day.

Buying alcohol is a nightmare. Beer and wine are not served in any city-centre restaurants except in high-end hotels. Even in Happy Hour it’s £9 a pint. A bottle of house red is £60. Most hotels have happy hours for two hours and outside these times you’d need a second mortgage to buy a round.

There is one off licence in the whole of Qatar and don’t imagine you can just stroll in there for a few tinnies.

The ironically named Qatar Distribution Company is situated in a barren dusty suburb next to the Ideal Indian Primary primary school.

As well as booze, it sells pork, which is also banned from supermarkets.

There are security staff manning the entrance behind barriers that only let people through if they have a permit.

When we arrived we were immediately asked: “Are you from the embassy?” When we said “No” they refused us entry and called the head of security. He explained that with no permit it was strictly no sale.

A worker at our hotel said: “It’s unbelievably strict. Even if England fans started planning now and had some sort of address in Qatar, they still wouldn’t get a permit. It will be pricey hotels, the fan zones or the black market for Three Lions fans.”

Those lucky enough to secure a permit are officially invited to apply through their employers.

A lengthy application form is filled out and each customer must be sponsored by a company official.

The person must be able to prove they earn above a minimum amount.

They can only spend a certain percentage of their monthly income on booze.

The permit can only be used by the person named and any alcohol bought must be for personal consumption only.

World Cup organisers are bracing themselves for a huge increase in visitors if Wales and Scotland qualify.

Both countries could bring well over 30,000 fans each if they make it through the play-offs next year.

Wales haven’t qualified for the final stages since 1958. Scotland haven’t made it that far since 1998.

It means generations of supporters have never seen their team in the final stages of the World Cup.

And it could lead to a massive demand for tickets, with the tournament just a seven-hour flight from Cardiff or Edinburgh.