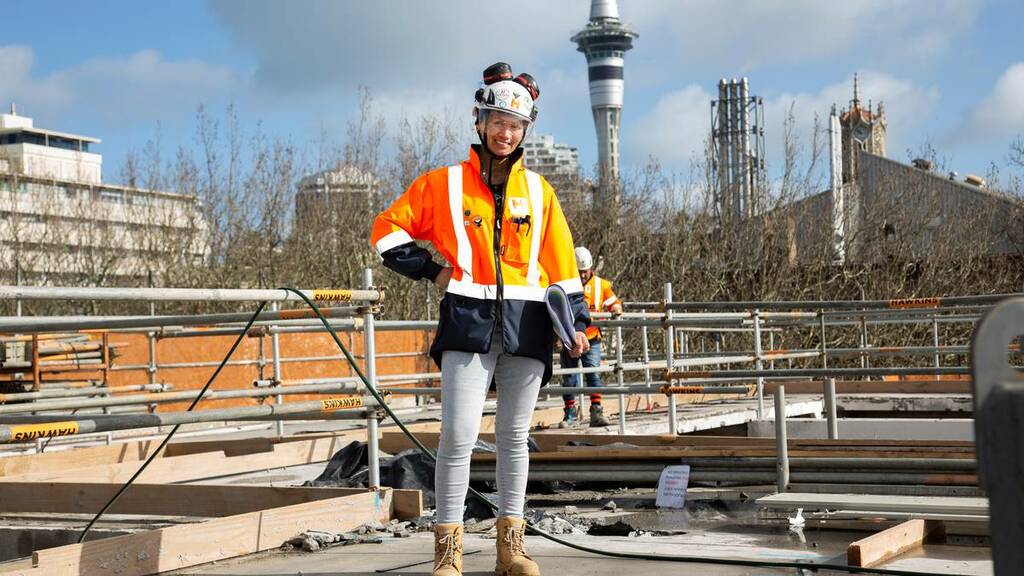 When Roimata Maihi decided she wanted to become a foreperson in the construction industry, men onsite told her it was probably too late.

She was almost 40 years old, having waited until her son turned 14 in 2014 to establish her career, after leaving a violent and abusive relationship. At the time, she was working as a site receptionist with Hawkins, aware that a position out in the field could pay practically double what she was earning as a solo mother juggling work-life balance.

"The guys told me I was too soft for a leadership role, and that I'd need to change," recalls Roimata, 45, who started with the company at 22, before she took time off to have her son and eventually returned to her flexible administration role, securing a business degree. "I wanted to be true to myself and my personality, but that doesn't mean I'm a walkover."

Today, Roimata is an award-winning foreperson for Hawkins, one of New Zealand's biggest construction companies and part of the facilities business unit of Downer New Zealand. Using her experience breaking into a male-dominated industry, she's now helping other young wāhine wanting to develop leadership skills.

"Since being promoted into a supervisory role, I know what it's like to be the only wāhine and vying to be treated equally," says Roimata, winner of this year's Special Merit Award in Professional Woman of the Year – Site Based, presented by the National Association of Women in Construction. "The beauty of wāhine and what we add to leadership is our natural ability to have empathy for people."

Roimata is a facilitator for Downer's Te Ara Whanake Wahine Toa, a Maori leadership programme for women, which heads to Impact Leadership based at Sudbury in Te Horo Beach, just north of Wellington, each year. There, they participate in Pathfinder, a leadership development programme that teaches leadership principles to attendees through interaction with horses.

For Roimata, the two-day experience was a huge factor in the growth of her own leadership skills after she attended in 2018, as part of a two-year Hawkins Cadetship Programme she was selected to participate in.

During the Impact Leadership programme, which is attended by the likes of CEOs, Olympic coaches, and emerging young leaders starting out in their careers, each person is matched with a horse based on feedback from their manager. Aspiring leaders then have to motivate and build a relationship with their horse in the arena, learning to guide it by practicing leadership skills and key principles. According to Roimata, it can be a humbling experience.

"You're receiving immediate and honest feedback from the horse and the standard you set at the beginning, like your energy and physical presence, matters because if your horse isn't responding well, you're probably lacking in one of those areas," she says. "The principles of getting a horse to follow you and getting people to follow you are very similar. You have to get the small stuff right first before you can go and conquer the big stuff."

Roimata supports attendees on the programme, who sometimes end up in tears before they conquer the art of experiential leadership. "It's quite emotional and some people want to give up, or they're intimidated by the larger horses. But the thing is, it's not the size of the horse, it's you," she explains. "As a leader, if you're trying to get a bunch of people to follow you, you have to look at where your energy level is and what your physical presence is like. You need to make sure you have the respect and attention of the entire room."

"Roimata had a bit of a battle on her hands to motivate Bianca to walk over the bridge and she needed to show determination, which she did," recalls Janine, a former broadcast journalist and presenter for the BBC and National Radio. "Her growth since attending has been astounding and the results speak for themselves as she has become a role model for other younger people starting their careers. Her journey has been an inspiration to us all."

Roimata recalls the struggle of working with a temperamental Bianca, who'd been bullied in the paddock. "She jumped at everything, and I managed to calm her down and get her to focus on me, but I had to pull my energy down," she shares. "I had to slow down and give her heaps of feedback and build that relationship and in the end, she was great. People can be like that and need more encouragement, while others just need reminding of the principles of good leadership."

With goals to continue furthering up the ranks in the construction industry, Roimata says a big part of her leadership style is being open and honest about the barriers she has faced while establishing her career.

"I always remind my girls to sit at the table when they enter the meeting room, rather than go and stand in the corner, and to speak up,'' says Roimata, who has been a supervisor for five years. "I tell my apprentice girls to get qualified before starting a whānau, because I know the struggles it can bring, and I don't want them to go through it. They can come back to mahi qualified and earn up to twice what they started on as an apprentice. Sometimes as wāhine, you sacrifice things to be a mother, but the timing for my career was perfect and I love what I do."