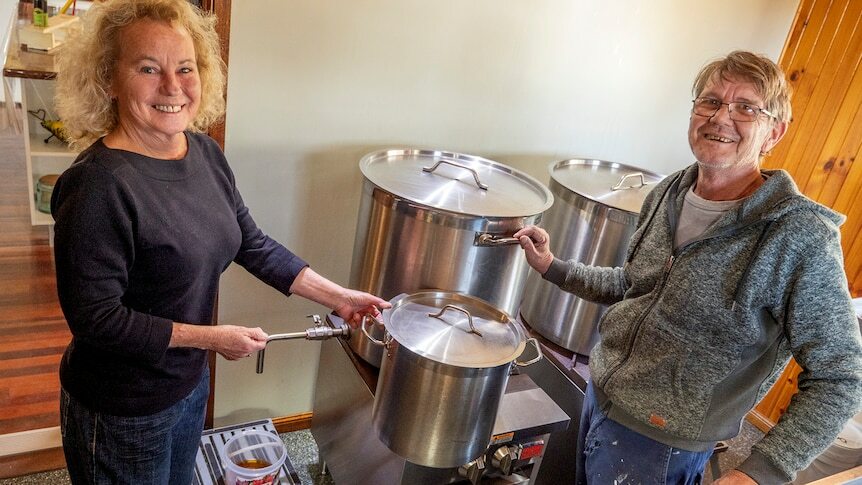 The smell of delicious spices and secret ingredients surround Bronwyn and Mark Welbeloved's timber home in the middle of the Queensland bush.

The couple, who produce a craft-brewed Worcestershire sauce from the cookhouse on their property, admits their business has taken over every corner of their house.

They say they had no intention of living in the thick of the fermented condiment, but demand for their Well Loved Worcestershire Sauce continues to grow.

Just a few years ago, they were bottling 20 sauces a week as a bit of a hobby.

With the phone constantly ringing, Mark flips through a handwritten order book tracking deliveries around Australia or the 130 shops they supply.

"It's just unbelievable how they try to get our sauce and where they go to get it," Mark says.

"When we took it to the markets, we thought we were competing with every $2 Worcestershire sauce.

"So, we went down the no preservatives, no gluten, no artificial colours, no animal products, so we could put it into health food shops."

The couple fell into the Worcestershire sauce business much the same way they created their recipe — with coincidences, fate and a dash of romance.

Working as a commercial fisher for 25 years, Mark hired Bronwyn as the ship's cook in 1990 on the condition she didn't get seasick.

"Bronnie was my cook out at sea, I gave her a job out of Hervey Bay," Mark said.

"I said, 'we will give you a try and if you don't get seasick, but whether you get seasick or not you are out here for a month'.

"But she was out there with me the whole time, we were always together out there at sea."

They fell in love and later married.

After spending 25 years in the waters off the Queensland coast fishing, the couple quit the sea for the bush and made Horse Camp their permanent home.

"I was given a recipe from a friend's mother, and I just loved it," Bronwyn said.

"I changed a few things and I made it ours."

After trialling the sauce on their "fussy family", the couple quickly became a hit at the local markets, selling out as fast as they could produce the delicious liquid.

In perhaps a sign, they have traced their surname, which features on their labels, back 700 years to the region of Worcestershire, England.

The couple has never had to advertise their product, and rely on word-of-mouth and return customers.

With business booming they are considering upgrading the cookhouse to a shed, depending on council approvals.

"When Bronnie first started doing it I said, 'I just don't want it to overtake the house darling'.

"But now there isn't a corner of the house that doesn't belong to the sauce."