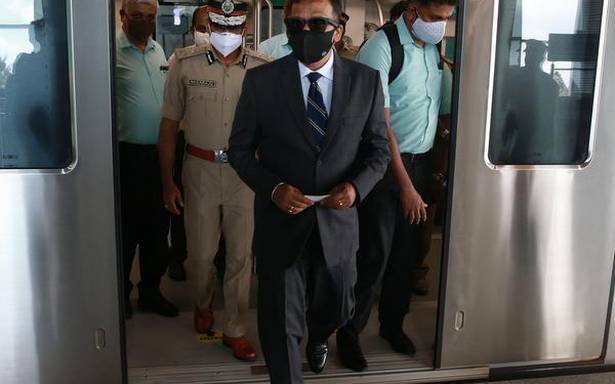 Allaying fears that the approximately ₹1-crore loss per day will result in Kochi Metro Rail Limited (KMRL) becoming yet another KSRTC, Loknath Behera, the metro agency’s managing director, said a whole lot of new initiatives were on the anvil to improve footfall in the system of mass rapid transport by wooing youth, elderly people, and marginalised sections.

Rationalising the fare structure, offering concessions to frequent travellers, introducing day pass system and discounts to NCC and student police cadets and senior citizens as in Singapore were under consideration. Every effort will be made to ensure the safety and well-being of people aged 70 years and above. All this is important, since people must feel “at home” in the metro system.

Expressing dismay at finding just a handful of people in the metro train that he boarded after being placed at the helm of the agency, the former State Police Chief said the metro system could not afford to operate with such low patronage and incur loss. “Why can’t the metro, which offers a fast, reliable and clean service, attract satisfactory number of people when other commuting modes are overcrowded. I will go the full way to ensure that the metro system attains the target that I have fixed, of carrying over a lakh people each day by year-end. For this, I have the government’s full support,” Mr. Behera said.

Assuring that systemic changes were on the anvil, Mr. Behera said he had received a lot of encouragement and support from different sections of society in Kochi. Close on the heels of the substantial reduction in parking charges at metro stations from Monday, tangible and sustainable measures will be rolled out to increase footfall in metro trains. This will be done after taking a holistic view of public feedback received for the fortnight-long survey that was commissioned recently. Its findings are expected to be consolidated by October 2.

On the daily patronage for metro trains hovering below 25,000, he said most trains were running near empty. “On coming to know of the metro agency’s disconnect with the public during the past couple of years, I set up an in-house team to reach out to different sections of commuters and operators of other modes of public transport. The opinion of the members of the team will be collated while revising the fare structure, readying first and last-mile connectivity etc. I am confident that all this would see Kochi Metro out of the red,” he added.

Aimed at reaching out to the public, out-of-the-box ideas like hosting cultural programmes and music concerts at metro stations are under consideration. This is because Kochi has a unique and profound culture that extends beyond the arrival of the Portuguese. All this will go a long way in lessening the gap between the cup and the lip, a confident Mr. Behera said.