The architects of the first law to decriminalise abortion in Australia say the overturning of Roe v Wade in the US was a huge setback for reproductive rights, and further changes are needed at home to better enshrine access.

Western Australia was the first place in the country to remove most criminal penalties for pregnant patients seeking the procedure and doctors providing it, in 1998.

Cheryl Davenport, who introduced the bill into WA's upper house, sought to remove sections of the criminal code that allowed doctors to be jailed for 14 years and patients up to seven.

Ms Davenport said the overturning of Roe v Wade in the US was a terrible development.

The changes she drove in WA almost 25 years ago were sparked by two doctors being charged under the act.

She said back then, concessions had to be made to get the numbers in parliament onside and now the laws in WA were lagging the rest of the country.

Under West Australian law, a patient seeking an abortion must receive counselling about the medical risk of both termination and pregnancy from a second doctor who is not carrying out the procedure.

However, abortion is broadly accepted by medical authorities as safer than bringing a pregnancy to term.

In all other Australian jurisdictions, just one doctor is required, but a second is brought in for abortions past a certain number of weeks.

Additionally in WA, beyond 20 weeks, two members of a specially appointed ethics panel of six doctors must agree that the fetus or mother has a "severe medical condition" that justifies the procedure.

Under the law, a procedure past 20 weeks can only be carried out at King Edwards Memorial Hospital.

Children under 16 years of age cannot access an abortion unless a custodial parent has been informed and given the opportunity to participate in the counselling process.

"It was an outrage to me as it will be to millions of women throughout the world, that a panel made up of people openly opposed to abortion because of their religion, should be able to make a decision about millions of other people, namely women, and take them back not only to the 20th century but to the 19th century," Ms Warnock said.

She also supports change to the WA laws if younger women wish to pick up the baton.

"Abortion should be a decision for a woman because it's her body in the first instance that will be affected," she said.

"I wonder how men would feel if a panel of six women doctors could make a decision about their private parts."

WA Health Minister Amber Jade Sanderson said earlier this week the laws were now outdated and the government would look at reform.

"There were a number of concessions made along the way to pass that legislation [in 1998], and I think they've proven to show that that has provided hurdles for women accessing safe abortions," Ms Sanderson said.

"We're looking at a range of women's healthcare issues, that's one of them.

"The … ethics panel … was established around 20 years ago. It's probably not a model that's fit for purpose now, and we'll look at that."

But she stopped short of saying a law change was a priority for the government.

"I think there's a range of work that needs to be done in this area, it's not all legislative," Ms Sanderson said.

She cited cost and service provision as two other areas where work was needed.

In WA there are only two service providers and one of them only performs procedures up to 13 weeks.

MPs would be given conscience vote

Any reform on abortion law cannot rely on party policy, with MPs in Labor and the Liberal parties given a conscience vote, allowing government MPs to cross the floor.

In WA, Ms Sanderson would have to be confident she had the numbers in her own party before introducing amendments.

Last year, WA passed safe access legislation which stops picketers from getting closer than 150 metres to an abortion clinic or family planning services, but stopped short of broader reforms.

WA Nationals leader Mia Davies has thrown her support behind a law change but Nationals MPs are given a free vote.

"There are deeply held convictions when it comes to matters like this," Ms Davies said.

"But for me, it's as simple as saying women have control over their own bodies."

There is also resistance from outside of parliament.

"I guess it gives an element of hope that change is possible," Mr Abetz said.

"I think people often forget that the pro-life movement is actually very strong in Australia."

Mr Abetz opposes any further liberalisation of abortion in WA.

He thinks it is still too easy to obtain a late-term abortion even with the ethics panel, but would not want to see it abolished.

"Obviously, we'd like to see no abortions," Mr Abetz said.

"Because it is really terminating the life of a baby."

He also raised concerns that freeing up access to abortions could allow terminations because of a preference for a particular gender of child.

"In some of the ethnic groups within our nation, of course, boys are much more sought after than girls," he said.

"The feminists really should be standing up and saying that should be banned."

Mr Abetz, who drove an ultimately unsuccessful movement to change WA laws to require women to view 3D ultrasounds prior to a termination, wants Australian jurisdictions to further restrict access to the procedure.

"In one end of the hospital, we have doctors using all sorts of medical technology to keep these babies alive, that are born early," Mr Abetz said.

"And yet at the other end of hospital, people are actually deliberately terminating the lives of a baby.

"And the poor baby has no say in the matter at all."

In Western Australia, the number of recorded abortions has remained reasonably steady despite the population increasing.

There were 7,816 recorded induced abortions in 2018, the latest published figures from WA Health.

Between 2016 and 2018, about 80 per cent of abortions occurred in the first nine weeks of pregnancy.

Abortions performed at more than 20 weeks' gestation made up 1 per cent of the total. 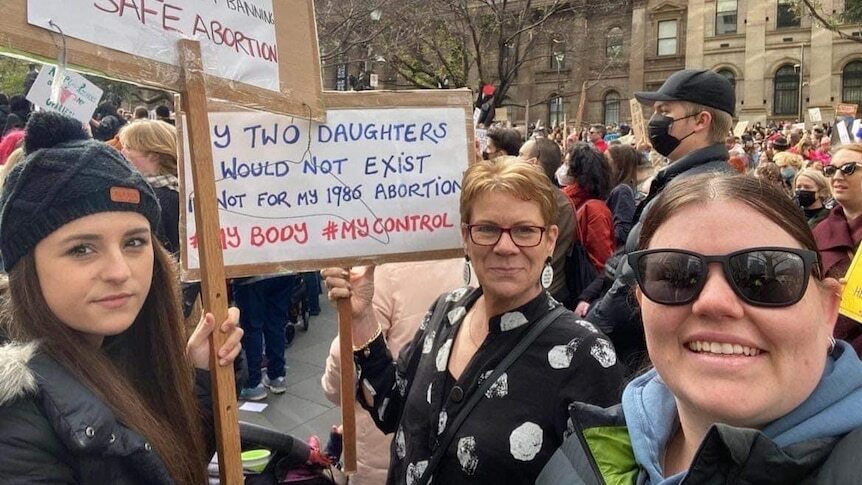 Overturning Roe v Wade has opened the door for abortion bans and restrictions in the US. Could it happen here, too?
Thousands across Australia took to the streets on the weekend to protest against the United States Roe v Wade ruling,…

In the wake of the Roe v Wade ruling in the US being overturned, protesters in cities across Australia say…

ABC News
Welcome to Oklahoma, the hardest place to get an abortion in a post-Roe v Wade America

Even before Roe v Wade fell, life legally began at the moment of conception in Oklahoma. Now it offers a…

Labor and Liberal members deny making any such agreement with Enid Lyons List, a group with stated aim of getting…

In 1970, attorney Nancy Stearns allowed women to share their stories in the fight for abortion access in the courts…