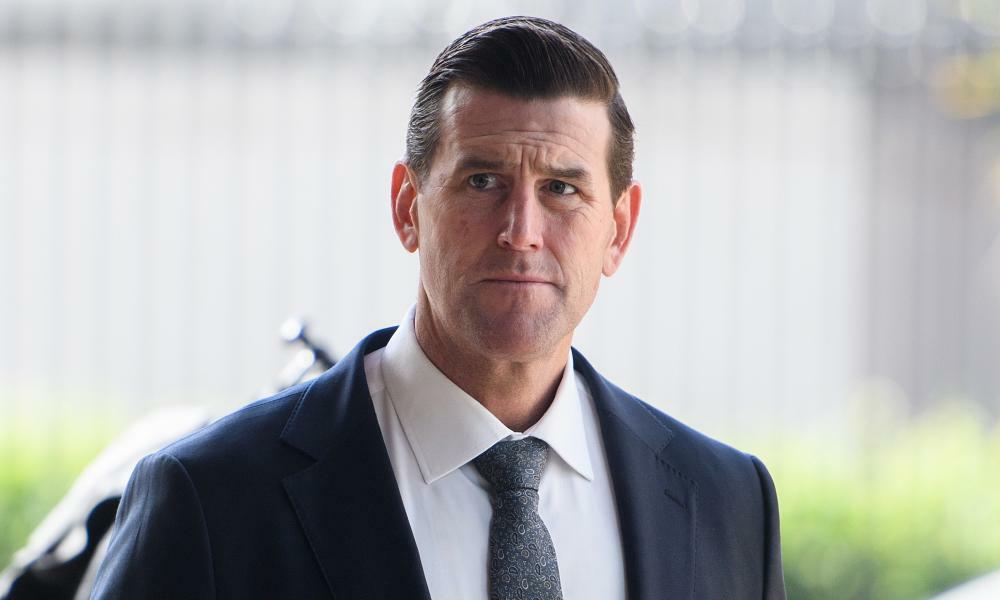 Woman who says Ben Roberts-Smith punched her sustained an injury in a fall earlier on same night, defamation trial hears

A woman who accuses Ben Roberts-Smith of punching her in the face during a late-night argument in a Canberra hotel sustained a large haematoma on her head falling down the stairs at Parliament House earlier in the night, a federal court defamation trial has heard.

The woman, with whom Roberts-Smith was having an affair during 2017 and 2018, has previously given evidence a black eye she sustained that night was the result of Roberts-Smith punching her, knocking her backwards on to a bed.

Roberts-Smith maintains the injury was sustained when she fell down a flight of stairs earlier in the evening, and said the assault allegation was a “fabrication”.

The woman – whose identity has been protected by the court with the pseudonym Person 17 – does not contest she fell down the stairs, but told the court in her evidence given in March she was also punched by Roberts-Smith later that night.

Roberts-Smith, a recipient of the Victoria Cross and one of Australia’s most decorated soldiers, is suing the Age, the Sydney Morning Herald and the Canberra Times for defamation over a series of ­reports he alleges portray him as committing war crimes, including murder, as well as an act of domestic violence against Person 17.

The newspapers are pleading a defence of truth. Roberts-Smith denies all wrongdoing.

Called by Roberts-Smith to give evidence in the federal court Friday, a defence industry executive, Terry Nichols, testified he met Person 17 at the end of a function at Parliament House in early 2018.

Nichols, a former army officer, said the woman was unsteady on her feet and slurred her speech as she asked him if he knew Ben Roberts-Smith.

Nichols said he told Person 17 while he did not know Roberts-Smith, he had recognised him at the event, and would find him.

As he was calling a lift to take Person 17 to the car park she attempted to descend a flight of stairs unaided and fell face first, striking her head on the landing, Nichols told the court. He said the fall made a “terrible thud” and Person 17 was momentarily unconscious.

When she came round, Nichols said, “there was a very large haematoma on the left side of her forehead above her eye … an immediate consequence of the fall”.

Nichols asked two Australian federal police officers, who were nearby, to arrange for an ambulance for her, because of the size of the haematoma: “It was like a large egg, quite a substantial lump above the left eyebrow … given it had happened so quickly, that’s why it was of concern.”

Nichols said he left Person 17 with the AFP officers and went to find Roberts-Smith in the car park. He found Roberts-Smith and directed him back to Person 17. He did not see either of them again.

In her evidence to the court, Person 17 said: “I fell down about … two or three steps on to the landing and I hit my head as I fell.”

The evidence about the stairs is relevant to Roberts-Smith’s defamation case because it relates to one of the key allegations made against him: by the newspapers as part of their truth defence: that person 17 was assaulted in the hotel room she shared with Roberts-Smith.

Subpoenaed by the newspapers to give evidence in March this year, Person 17 said Roberts-Smith was angry with her back at their hotel room, yelling in her face, “What the fuck have you done”, saying she had been flirtatious with other men, and had exposed their affair.

Person 17 said she just wanted to go to bed and that her head hurt.

She told the court Roberts-Smith responded by saying “It’s going to hurt more”, or “I’ll show you hurt”.

“And he punched me with his right fist on the side of my face and left eye … I ended up lying on the bed. I just lay there still because I didn’t know what he was going to do next.”

“I said ‘my head hurts and I want to go to the hospital’.

Roberts-Smith was questioned on the alleged incident at the Canberra hotel during his testimony before the court last year. He denied all allegations of violence or threatening behaviour, saying the allegations were “completely false”.

“The whole story is a fabrication,” he told the court.

Roberts-Smith said Person 17 sustained the injuries to her face and side when she fell down the stairs at Parliament House. He said he did not believe she needed to go to hospital, and he took her to the hotel room where he undressed her, put an icepack on her head, and put her to bed.

Ben Roberts-Smith’s former wife, Emma Roberts, has previously told the court Person 17 had a black eye several days later when she arrived unannounced at her family home to reveal the affair. Roberts told the court Person 17 told her she had fallen down some stairs at Parliament House. In her evidence, Person 17 said she lied about the cause of the black eye because she feared retribution from Ben Roberts-Smith.

“I knew that I would be targeted by him,” she said.

Roberts-Smith has previously told the court he and his wife were separated at the time he and Person 17 began their affair. His now ex-wife told the court this was not true, that they were not separated.