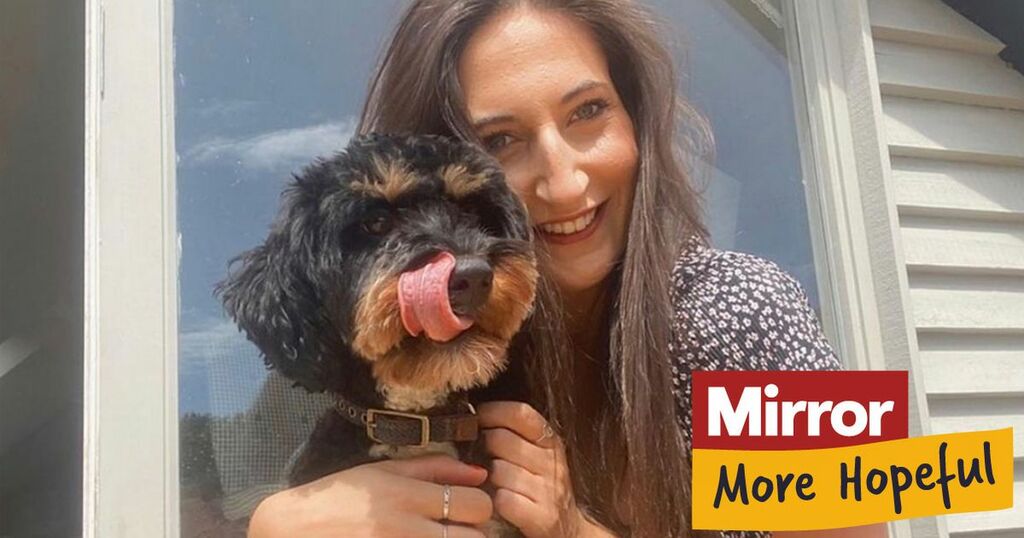 A woman, who saved the life of a puppy who was thrown at her car on a dual carriageway, has told how he went on to save hers after her relationship broke down before lockdown.

Lexie Elliott had pulled into a layby on a busy dual carriageway in Brighton to take a call in December 2018, when she witnessed a passing van hurling a puppy out onto the road in front of her.

"It was dark and I had my headlights on. This blue van pulled up alongside me on a dual carriageway, obviously noting that I was there," the 26-year-old recalled.

"The next thing I knew, this small fluffy thing was literally thrown out of the van in front of me. I thought it was a rabbit and, on the phone to my boyfriend at the time, I said I'd call him back, got out of the car and found a little cockapoo puppy - Wilf."

After getting home with Wilf, Lexi phoned the police, who gave her details for the local Dogs' Trust, who booked the puppy into the vets the following day. There, they discovered the puppy was around 10 weeks old, but he didn't have a microchip.

Dogs' Trust started circulating a photo of the pup, giving any potential owners two weeks to come forward and claim him, in case he had been stolen, but no one did.

Lexi, who runs her own PR business, said: "I think four hours into having him, he was already mine. I'd fallen in love! So, when no one came forwards, I kept him.

"It's definitely the weirdest thing that's ever happened to me. But I'm dog mad and, at the time, I was desperately trying to convince my boyfriend to have one.

"Then, out of the blue, I pulled up in the layby and a dog landed in front of my car - giving us both no choice!"

The reason behind Wilf being abandoned in such a cruel and callous way remains a mystery, but over the years it has become apparent that he came into Lexi's life for a reason.

"Ten weeks is the age when puppies are often sold on, so it can't have been a breeder. And, surely, if you had a puppy like him and you didn't want him, you'd take him to a rescue centre," Lexi said. "None of it has ever made any sense and it remains a mystery why they did it."

Although Wilf is undoubtedly adorable, and such an important thing in Lexi's life, it hasn't always been plain sailing - and around six months in, the animal lover was left questioning, "what have I done?!"

"He was a liability and he's still not perfect. He clearly had a horrible start and I don't know what happened before I found him, but he's terrified of everything and everyone," she said.

"Of course, the way he deals with that is by barking at anything he's scared of. He barks at my dad, because he's very tall, which scares him, or at the postman, because he's walked past and unnerved him."

In addition to people, Wilf is also terrified of other dogs, which can make walking him a challenge, but once he gets to know them it's all good.

However, the bond between Lexi and her pooch has grown stronger than ever over the last two years, since she and her boyfriend of six years parted ways in November 2019.

She said: "It was March 2020. I'd recently launched my business, I'd moved into a little one-bedroom flat, I didn't really have friends nearby and I was trying to make money.

"When we were splitting our possessions, there was never any questioning the fact I was getting the dog!

"The split left me with an awful lot to cope with - especially when Covid hit - and the routine of looking after Wilf and taking him for walks really gave me a structure and the motivation I needed to keep going.

"Lockdown meant I couldn't go out to meet new people, so he was my little bestie - and still is. There were times when I really hit rock bottom, emotionally, but Wilf saved me and kept me going."

And with the world opening back up and the prospect of meeting someone new becoming a consideration, Wilf will be the deciding factor in any new relationship for Lexie.

She said: "It may sound ridiculous, but he is like having a child. He feels a bit like my son and I am incredibly protective of him.

"Also, he's a bit troubled, so he's harder work than most dogs. And if someone doesn't like dogs - and in particular doesn't like Wilf - I'm afraid it will never work for us."

Meanwhile, Lexie - who with Wilf is an ambassador for the Woof & Well Awards being run by pet food firm Vet's Kitchen, looking for stories of everyday heroism from owners who want to thank their dog for helping them through the last 18 months - is happy to bide her time.

She said: "There have been points during the pandemic when, without Wilf, I couldn't have got out of bed, yet alone run a business. So, I am afraid he is far more important to me than any boyfriend."