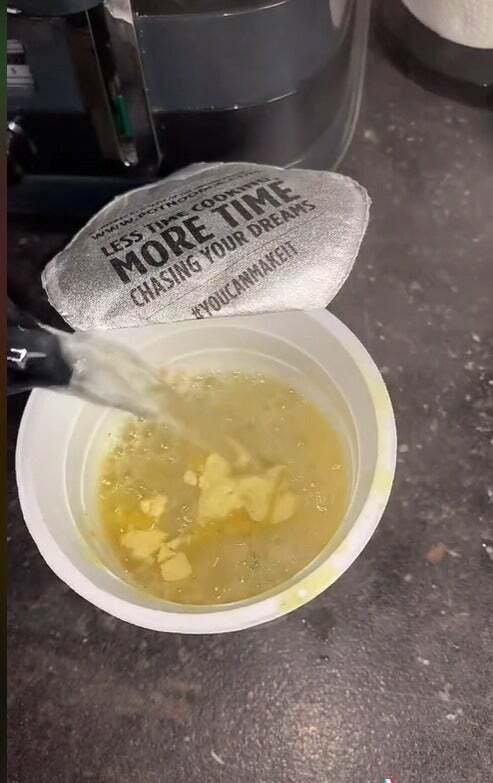 A woman has divided TikTok because of the bizarre way she prepares her Pot Noodle.

Posting on the platform, Alex McKnight posted a video making the concoction and it has now amassed more than 350,000 views.

She said: “My boyfriend told me to film a Pot Noodle tutorial and I will go viral for how ‘criminal’ it is.”

So let’s dive in to how “criminal” it really is. She starts by boiling the kettle and removing the packet of soy sauce from the pot. So far, so normal.

But then, instead of pouring the hot water into the pot up until the line, she uses a sieve to separate the seasoning from the dry noodles.

Shen then puts the noodles into the bin, meaning she’s left with just the powder which she pours back into the pot and mixes with water, a dash of pink rock salt and soy sauce. She adds that she enjoys the soupy mixture with a glass of milk on the side.

Since being posted, the video has racked up almost 18,000 likes and hundreds of comments from people who were as equally horrified as her boyfriend.

One person said: “The way my eyes widened when you BINNED THE NOODLES.”

A third commented: “omg I don’t see anyone talking about the fact you added MORE SALT to instant noodles.”

Someone else put: “I’m going to be sick.”

But not everyone was disgusted.

“This is literally the best way to make a pot noodle,” said one person, as another agreed: “I make mine the EXACT same even down to the extra soy sauce.”

Alex is also not the only TikTok user to leave people with their heads in their hands. Recently, a spring roll toastie similarly shocked the internet with some branding it horrible and others thinking it sounded pretty nice.

This new viral food concoction – which is more pot than Pot Noodle – is just the latest shocker. Would you eat it?