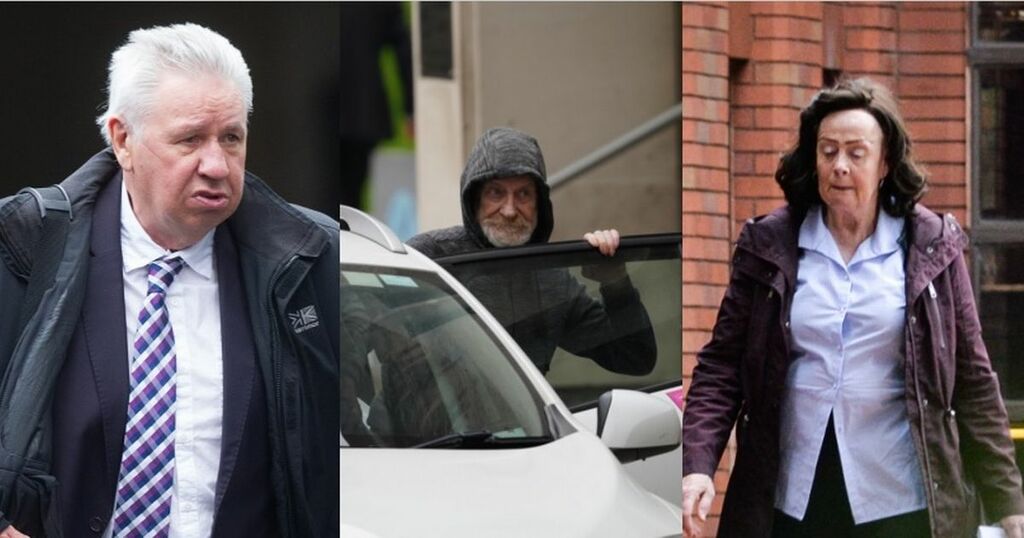 Old enough to know better: The 70-year-olds whose crimes shocked the city
Here are some of the shocking cases involving older people

Andrew Guy died a couple of days after the savage beating due to internal bleeding. Police believe his killer, Daniel…

The pub soul and funk disco that ended in a 'moment of madness'... and a man being glassed in the face by his girlfriend

A woman who plunged a wine glass into her boyfriend's face during a row in a village pub has walked free from court after insisting she acted in a 'moment of madness'. Denise Bintcliffe, 57, smashed the glass of red wine over her partner's forehead after he slapped her when they began arguing in front of fellow regulars during a soul and funk evening.

Police arrived at the Crown and Conspirator pub in Bramhall, Stockport, to find Bintcliffe looking on as her boyfriend held his head in his hands, while bar staff applied napkins to stem the bleeding.

Asked why she carried out the attack, Bintcliffe who had been dating the man for 17 years said: "I don’t know why I hit him. I just can't believe that I've done it."

Her partner was taken to Stepping Hill Hospital, where he needed six stiches. He takes medication to thin his blood and lost so much of it in the attack he was on the verge of needing a transfusion, a court heard. He declined to give a statement to police.

The fight broke out when couple went out together for a soul funk disco at the pub on October 2 last year. Initially, they and pubgoers could be seen enjoying the music with some dancing in front of the bar.

But video footage played in court showed Bintcliffe thrusting her wine glass into her boyfriend's forehead before he clasped with his head in his hands.

Eleanor Myers, prosecuting, said the defendant remained at the scene until paramedics arrived and that police arrived around 11pm. "The officer explained that he wanted to speak to the defendant regarding the incident," she said.

"She was taken for questioning to the back of the police car and was visibly upset. She had a cut to her right hand and had plasters.

"An ambulance arrived shortly afterwards to take him to hospital following which the defendant was arrested. She continued to speak to the police and said 'I don’t know why I hit him. I just can't believe that I've done it.'"

The victim sustained a cut to an artery on his forehead and the court heard hospital medics 'struggled' to control the blood flow. The victim was left with swelling, pain around the brow and cheekbones. Bintcliffe was formally interviewed, but gave no comment.

"It took applying pressure for over an hour in total and there was a significant amount of blood loss," Ms Myers added. "It was just after 4.30am on October 3 that the bleeding appeared to have stopped."

In mitigation, Bintcliffe's counsel, Niamh McGinty said her client who had no previous convictions posed 'a low risk of reoffending'. She said the couple had not seen each other since the incident due to bail conditions, but he had told friends that he wanted to see her again.

The court heard Bintcliffe suffers from several health issues including brain damage, which she sustained after complications of a medical operation, as well as epilepsy and depression.

"She is deeply ashamed of her behaviour," Ms McGinty said. "She was immediately horrified by what she had done and she is very much aware of how serious it could have been. It can be properly described as a moment of madness. She struggles to properly manage conflict situations and that’s something she needs to have assistance with."

"There was an altercation, you had a row, and the victim slapped you. You responded by hitting him with the glass to the forehead.

"There was an arterial bleed to the victim's forehead and he is on blood thinners. It took more than four hours to stem the bleeding. He was on the verge of needing a blood transfusion.

"It was only because I consider this incident an act of impulse and not a deliberate action that I am suspending the prison sentence. This is a case where compensation is not appropriate given the nature of the relationship."

Bintcliffe was also ordered to complete a 'Skills for Relationships' 30 Rehabilitation Requirement Days and pay a £156 victim surcharge.

Old enough to know better: The 70-year-olds whose crimes shocked the city
Here are some of the shocking cases involving older people

Andrew Guy died a couple of days after the savage beating due to internal bleeding. Police believe his killer, Daniel…