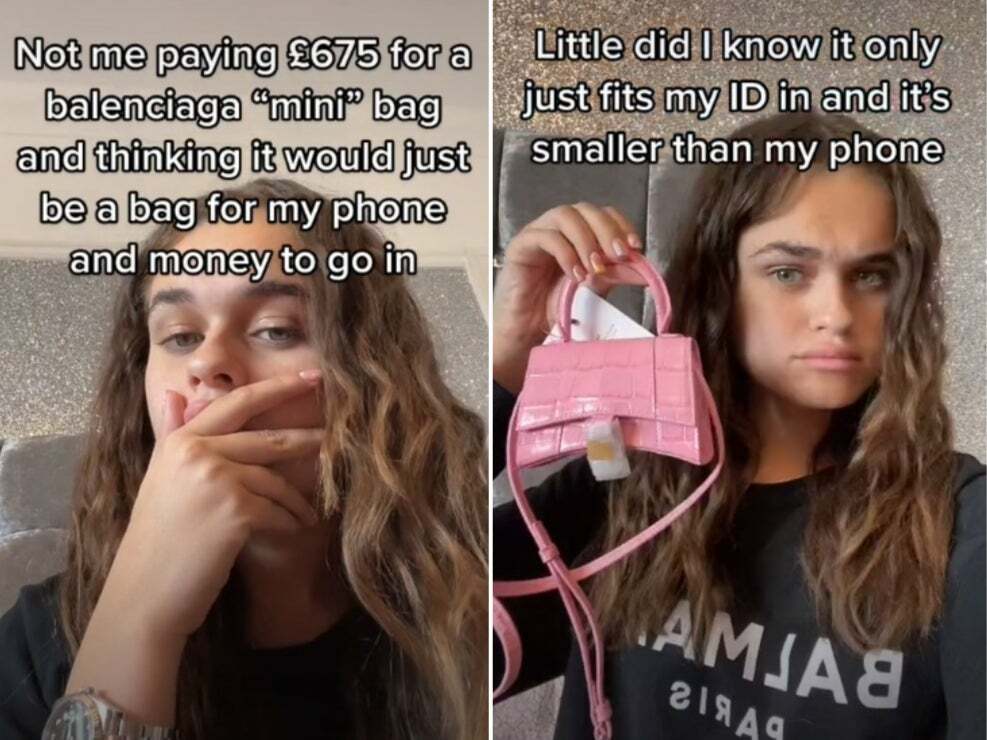 Mini handbags are making a comeback in a big way with the likes of the Kardashians, Gigi Hadid, and Rihanna recently sporting the vintage 00s look - but one woman seems to have underestimated just how small the micro handbags really are.

Khloe Kalvina (@khloekalvina) ordered a pink Balenciaga bag after seeing it online and was shocked to discover its true size when it was delivered to her.

After claiming to splurge £675 on the designer purchase, Khloe was definitely expecting something more substantial and considerably bigger as she explains in her TikTok.

“So when they say mini they really mean mini,” she wrote jokingly as the caption.

With the on-screen text captions, she explained what she wanted to use her new bag from the Spanish designer for: “Not me paying £675 for a Balengcia ‘mini’ bag and thinking it would just be a bag for my money and phone to go in.”

But when she takes a look at her new purchase, she quickly realises that the bag wouldn’t be able to carry the things she needed.

Another on-screen caption adds: “Little did I know it only just fits my ID in and it’s smaller than my phone,” as she pans the camera round to reveal her new bag and then pans back to her face while holding the Balenciaga bag in her hand next to head to provide a size reference as it is smaller than her head.

She then does this again, using her hand as a size reference so viewers could just how tiny her new handbag really is.

Since posting her designer debacle, Khloe’s video has received over 585,000 views, and nearly 40,000 likes, along with dozens of comments sharing their thoughts on the TikTokers misjudgement.

Some sympathised with Khloe for not realising the size of the bag.

One person wrote: “Noo, the mini looks so much bigger online,” and Khloe agreed replying to say how she was “heartbroken.”

“Haha I got this exact one and I was shook,” another person said.

Someone else added: “I really learnt this the hard way, you cannot shop luxury online. We really have to go to stores.”

While others couldn’t quite believe how much Khloe spent on such a small handbag.

“No way you’ve payed [sic] that much for a bag like this,” another person said.

Someone else replied; “You should have checked the measurements before buying it.”

It’s fair to say Khloe has experienced first-hand the pitfalls of online shopping and might want to buy her next designer handbag in person next time,