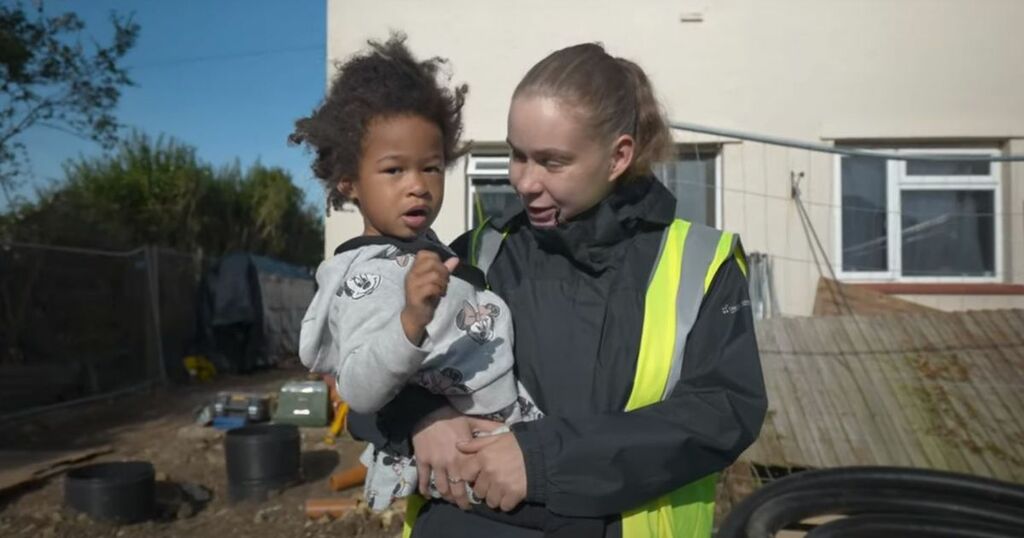 A young mum has described her joy at getting a new home as part of a radical new project in South Bristol - in the back garden of her family home.

The mum, Toni, lives with her mum and dad and her daughter in a council home in Knowle West, but now they are facing a brighter future.

The innovative scheme will see an initial 14 new council homes built in Knowle West, an estate built in the 1930s and 1950s, where most homes have big back gardens.

READ MORE: Rogue Bristol landlord banned over 'shocking' state of home where 'up to 18 people' lived

But with 16,000 people on the council house waiting list and the council struggling to get developers to meet affordable homes targets on brownfield developments closer to the city centre, the project based at The Park in Knowle West is making its own, often very personal dent, into that waiting list.

Council chiefs have now given their backing to the project after two new prefab homes were constructed - with the help of the people who are going to live in them - in the gardens of two council homes in Knowle West.

Toni said she and her daughter were struggling for space living with her mum and dad, but the house for her in the back garden is a Godsend as it gives the best of both worlds - her independence while having her parents close by. “I live with my mum, my dad and my daughter, but there’s not actually a lot of space for my daughter. It’s difficult,” she said.

“It’d be nice to have my own key so I can go home when I want. In my mum’s back garden, we are creating a home.

"I never thought the council could find me a home in a space like this and it’s nice to know that you have people around you to support you and it feels just so important because I’m involved - it’s not just down to the builders, it’s down to us as well and I like to meet the crew as well, which is quite cool,” she said, as the house was being constructed.

People who are going to be the recipients of the homes get involved in the project, and Toni has been helping the building firms put the house together at The Park Centre. “I get to learn new skills, make new friends. I’m really excited to paint and decorate my daughter’s room with her. I’m excited for the space, and we’ll be able to have people round.

“There’s more independence, more freedom and more time to spend with my daughter,” she said.

The technicalities of the project are complicated, but the solutions are fairly simple. The council identifies ‘micro-sites’ where people are happy to have a home in a big garden or side space - often because they can’t manage it anymore.

Existing council tenants volunteer parts of their garden for the project, and that land is then transferred from council ownership to We Can Make, which is a community interest company, on a long-term lease.

The rents of the little new homes that are then built are fixed at no more than a third of the average household income in Knowle West, to make sure they will always be affordable.

As well as Toni’s new home, which took shape before Christmas, the second home in the pilot scheme saw a new home built for someone living in temporary accommodation, and the householder who volunteered their garden to be used did so because it was too big for them to manage.

After the initial two, 14 sites are now being worked on, and it could go further than that. We Can Make’s director, Melissa Mean, said the key was to make sure it’s led by the community, volunteering their gardens or land, to help out other people in the community.

“We Can Make is a new community-led way to make affordable homes for local people,” she said. “In low-density neighbourhoods like Knowle West, there are often spaces hidden in between buildings and in large back gardens where new homes could be added.

“We call this gentle densification ‘urban acupuncture’ - adding homes precisely where people need them most.

“We Can Make has three essential ingredients. One, is opt-in densification. For example, a family experiencing over-crowding can opt-in to use part of their garden to create space for a new home for their adult child to live in, and which is guaranteed to be affordable forever.

“Two, the community helps set the rules for what gets built through a Community Design Code. Three, we localize and de-carbonise the production of the homes using a timber modular construction system. The parts are made in our community factory, growing local jobs and community wealth,” she explained.

“Our aim is that other communities will be able to learn from what we are doing in Knowle West, and use the approach to help better meet their own housing needs,” she said.

Any council tenant volunteering their garden to be used gets first nomination rights on the new ‘micro-home’, and their front garden renovated too.

If it’s not for a specific family member, then the new homes will be allocated through the council’s HomeChoice lettings system, under a Local Lettings Plan, which means people in Knowle West on the waiting list will be able to stay in their local area rather than end up in a flat somewhere miles across the city.

When the first 16 micro-homes are done, there’ll be an assessment of how the project is going - with both the householders and their new neighbours, and it could then be rolled out across other parts of Bristol.

“We Can Make is a really exciting, innovative way to support our ambitions to deliver more affordable homes and tackle Bristol’s housing crisis,” said Cllr Tom Renhard, the man in charge of housing delivery at Bristol City Council.

“By working collaboratively with Knowle West Media Centre and the local community, we can make sure that the right homes are built in the right places for the right people.

“This scheme makes good use of land available to the council and enables people to stay within their local area. By disposing of this land to a not-for-profit organisation rooted in the community, we can make sure that the homes remain available to those that need them most in Knowle West now and in future,” he added.