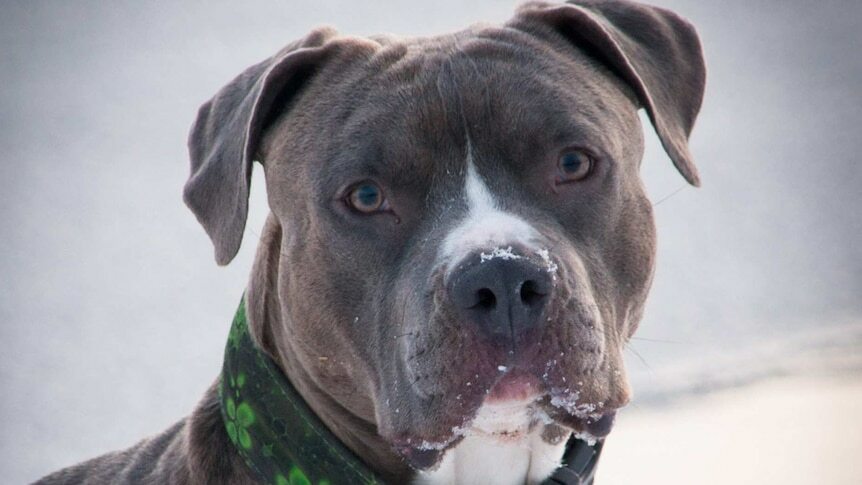 An Adelaide woman has told of the terrifying moment a dog attacked her while she was walking with a support group for children who have been traumatised by abuse.

Kristy Burgess, 43, told ABC Radio Adelaide the dog bit her head and arm while she was walking near the Cowandilla Children's Centre on Saturday morning.

The dog was with its two owners and a second dog of the same breed when the mauling occurred.

The male owner disappeared straight after the attack while the woman owner quickly said sorry and then also vanished.

Although she received surgery after the attack, Ms Burgess said she was grateful none of the children were hurt.

"I feel relieved this happened to be a bigger person," she said.

"I think it's a ticking time bomb."

Neither the dog nor its owners have been found.

The Cowandilla Children's Centre, in Adelaide's west, is on the same site as Cowandilla Primary School.

Ms Burgess was holding her own young puppy at the time of the attack.

The group she was with was walking across the children's crossing on Jenkins Street when the attack happened.

"I did not hear the dog growl and it was launching up, it was on my head before I knew it," Ms Burgess said.

She said the dog would not let go of her.

"I was lower to the ground and just kept thinking 'please don't grab my neck' because it was shaking me at that time," she said.

"It was throwing me around like a rag doll."

Meanwhile, SA Police are investigating an incident at Paralowie yesterday, where a child was bitten on the face by a dog.

After 4:00pm on Monday, a woman was at a playground on Yalumba Drive with her four-year-old son, when a man walked past with two dogs.

SA Police said when the woman and boy approached the man, they asked to pat the dogs and he agreed.

SA Police said when the boy went to pat the dog on a leash, the unleashed dog bit the boy on the face, injuring his upper lip.

The man then ran away.

He is described as being of Caucasian appearance, aged in his mid-40s, wearing a light blue or grey shirt and dark-coloured pants, .

The boy was taken to the Women's and Children's Hospital, where he underwent surgery for his injuries.

Police say the dog was a kelpie or blue heeler.

In her case, Ms Burgess described the dogs as similar to a mastiff.

They were coloured grey and white.

She contacted police about the attack and is meeting with the local City of West Torrens council today.

Last week, another woman was attacked by a neighbour's dog in Gawler South, of Adelaide.

She received head, arm and abdominal injuries, and was taken to hospital in a serious but stable condition.