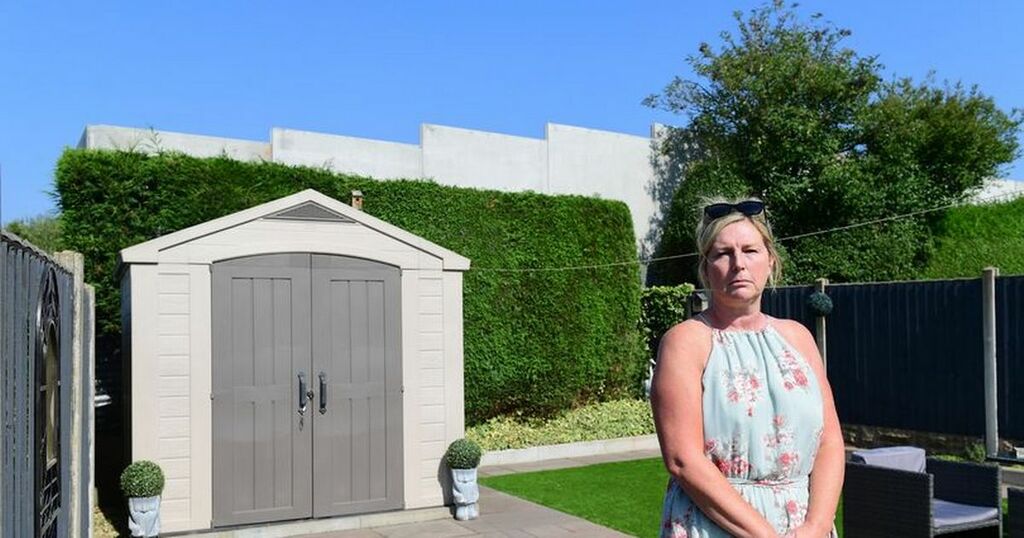 A woman was left furious after returning home to find a humungous 20 ft tall concrete wall in her garden.

Sharon Everill knew that a development being built would come up to the edge of her property, but the "eyesore" wall was a "complete surprise".

Everill, who lives in Knutton, Staffordshire is concerned that the value of her home will be lowered following the development.

As reported by Stoke-on-Trent Live, the developers of the project have since offered her a "contribution" towards the price of the trees that would be needed to hide the wall.

Everill has called the offer insufficient, however, and is saying that she wants the wall taken down.

She said: "We knew there was going to be a house 30 feet back from the edge of our property, but it was never mentioned that there would be a 20 foot high concrete retaining all.

"We just came back home one day and there it was.

"They need the retaining wall because they're going to backfill on the land behind it, so it won't appear that high from the other side.

"That means that monstrosity is going to be there forever now.

"We've spoken to the builders about the fact that we were never notified about this, and they insist that there were notices put up.

"But they say that they understand why we're so upset about this."

She added: "We've asked Tilia Homes or Kier Living or whatever they're called.

"They suggest that we plant conifers in front of the retaining wall to mask it.

Tilia Homes, which was previously known as Kier Living, secured planning permission for the housing development - which will see over 270 new homes built - in 2018.

The land off Wilmot Drive has been earmarked for new homes since 188 properties were demolished under the Renew North Staffordshire housing market renewal pathfinder more than a decade ago.

Mrs Everill says the land behind her home has always been green space and was not part of the previous Wilmot Drive estate.

The Paddocks will consist of 75 two-bedroom, 136 three-bedroom, and 65 four-bedroom houses, all for sale on the open market.

A spokesperson for Tilia Homes said: “The retaining wall along the rear of Weston Close has been built in accordance with the planning permission granted by Newcastle-under-Lyme Borough Council in 2018, and to an approved design.

"The details of this were publicly available at the time.

"We have been in contact with the resident in recent weeks and have offered a contribution towards tree planting to help conceal the wall from her garden.

"We are more than happy to discuss this further and reach a solution that is suitable for both parties.”