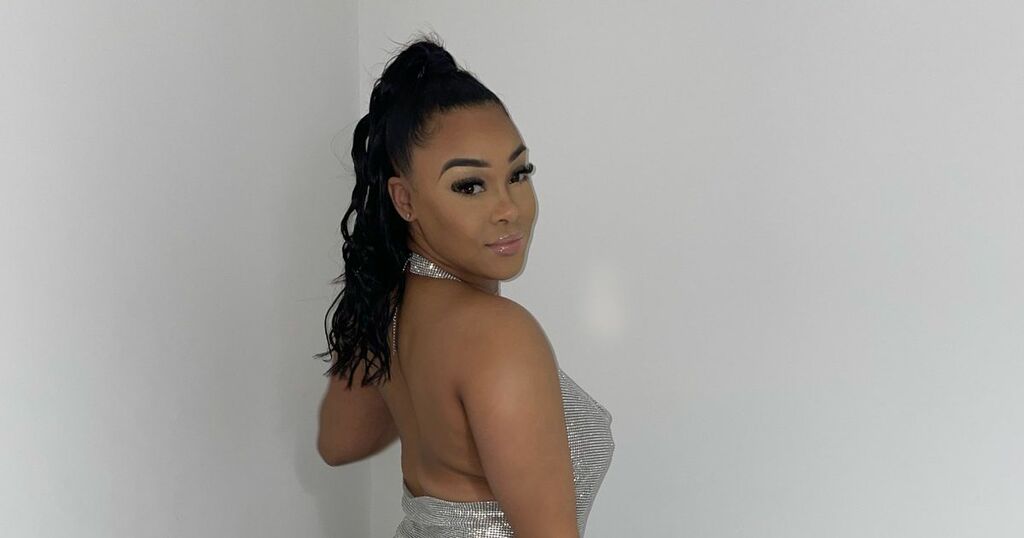 A woman was left humiliated after her dress fell to pieces on a night out forcing her to walk home barely able to keep herself covered up.

But when she complained to the seller she was told it would have been a good idea to buy a bigger size.

Destiny Campbell walked back to her hotel clutching her dress around her and with her underwear showing after her dress suddenly fell apart while out on New Year's Eve. The 21-year-old had travelled to Liverpool to celebrate the start of 2022 but she said that just after midnight, less than two hours after she had put the chainmail dress on, it began to fall apart.

Destiny, who's a size 10/12, quickly left the packed club and rushed back to her hotel while trying to protect her modesty, but says the only part of the dress that stayed intact was the neck.

Read more: Mum angry at M&S for refusing to print message 'which broke their rules' on her birthday cake

Destiny paid £75 for the silver dress in a size medium from Sorelle UK back in November and said she couldn't wait to wear it. But when the sales and marketing consultant contacted Sorelle UK for a refund, she says she was further humiliated when the company told her she should have chosen the 'size up'.

Sorelle UK claimed that it was not deemed a manufacturing fault the dress had been 'broken into many pieces' and photos show the customer 'very happy' with her purchase on a night out prior to this occurring. She was later promised a full refund.

Destiny, from Derby, said: "I knew I would be out for a long time because it was New Year's Eve so I felt comfortable enough in the dress. I wanted to look nice. We went to the club and within an hour and a half my friend told me to look down and my boob was falling out of the dress. I was trying to hold the bottom bit so my boobs weren't coming out.

"All of a sudden the bottom skirt part came apart. Everything separated, I'm not exaggerating. My friend left the club with me and I was walking home basically naked, holding my boobs with my thong and bum hanging out. Men were approaching me and trying to touch me. I was in a strange city and I was vulnerable. It was awful, everyone would have seen. It was embarrassing and I felt humiliated."

Screenshots of messages exchanged between Destiny and Sorelle UK show the company state they don't accept returns for worn items. The messages read: "This is a rhinestone dress that needs to be handled with care and it also needs to be a loose fit as per the pictures of all the models on our website, we would have suggested to choose the size up. It also doesn't just rip like that in so many pieces as it's not like that in the other photos. Unfortunately, this looks like it has been heavily handled with [sic] and we are unable to fix this."

Destiny told the brand: "Are you taking the piss? Do I look like a fat person? Oh my God. You have basically just called me fat which is so wrong. The dress broke apart from me trying to hold it all together as I was frantically running home so people would not see me naked. You as the supplier have a duty to make sure your dresses are constructed properly and with care. I am not an idiot and I know how to look after a delicate dress so do not insult me.

"If you are not willing to give me a full refund I will be taking this to court immediately and going through my bank to claim my money back. I will also be making the public aware of the incident and that people are not to buy from you again. Do not insult me by saying I've handled it heavily handed when I simply went to a club. You should be able to go to a club and dance normally or whatever and a dress not break on you? This is ridiculous."

Sorelle UK replied: "We never said or implied you was fat. You ordered a size M as we don't do a large in this dress. It looks like the dress ripped on one side only. The dress looked great on you and we will stop manufacturing this dress because of this accident."

The retailer eventually agreed to process a full refund. Destiny said: "If it's so bad that you're going to stop manufacturing then why are you not able to send a refund? I never asked for you to stop making the dress I asked for a refund. "

Sorelle UK replied: "This will be actioned for you, I can see many people think that we are in the wrong and I truly apologise if it came off across totally wrong."

Destiny said: "Are they trying to say I'm fat? They don't know what weight issues or mental health issues I have. It's not nice. I've put on weight since I was 18 but I'm not fat. I felt like they were saying I shouldn't be wearing their stuff. They don't even sell a bigger size and the website doesn't recommend sizing up. I bought a medium and I am a medium. It's so unfair. The dress wasn't too small. I wouldn't spend that much on a dress and get the wrong size. I bought the dress a month before so if it was too small, I had time to change it.

"They're just making excuses. I've shopped at Sorelle before and it's always been fine. They said they'd take it off the website but I just wanted a refund and I don't want this to happen to another girl."

Before wearing it on the night out, Destiny had only tried the dress on once before and said she loved it so much that she couldn't wait to wear it again.

"I put the dress on and I loved it and felt confident in it. It was a beautiful dress and I was happy with it. I never felt like the dress was too small or fragile. When I put it on, I asked my friends if there'd be another event where I'd get to wear a dress like that again but I won't get to wear it again now. People are saying that's what happens when you buy a cheap dress but it was £75."

A Sorelle UK spokesman said: "We advised the customer as per all companies should that we would suggest getting a size up in this dress style as it is supposed to droop at the back as it has a cowl back like the models and all our customer photos which are tagged on Instagram. Unfortunately, we only go up to a size medium in this style of dress as it is very small sizing and that is all our supplier makes.

"The customer was obviously very happy with her purchase of the dress to receive it, take photos and wear it on NYE with no faults. A manufacturing fault would have been a rip up the seam but the dress was then pulled and broken into many pieces so this is not deemed as a manufacturing fault.

"However, we did provide the customer a full refund when this was escalated to a manager, the first few responses was a temporary customer service agent due to Covid and apologised for any misunderstanding, we have also discontinued this dress due to this."

Sign up to our newsletter to get the latest news direct to your inbox by going here.