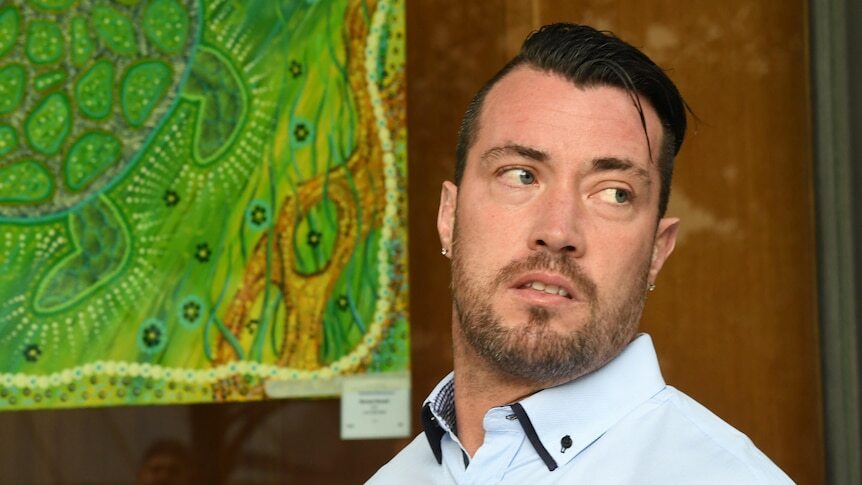 A woman has told a Sydney court she felt dizzy and panicked when there was "blood everywhere" as she began to recover from a body modification procedure to remove stomach skin.

The charges relate to procedures on three clients conducted between early 2015 and April 2017, including a woman who died.

One of the women, who cannot be named for legal reasons, today recalled booking an $800 procedure in November 2016 to remove skin from her stomach, following the birth of her children.

She told the NSW District Court Mr Russell performed the procedure at a tattoo and body modification parlour under a local anaesthetic.

"I don't know if it was adrenaline but I started to shake, I felt terrible, I was sweating," the woman said on a video link.

She recalled feeling "tugging" and "some pulling" on her stomach.

After the wound was stitched up, she was advised to go home, rest and take Advil before returning in five to seven days.

But she recalled the anaesthetic rapidly wore off at home and she took Nurofen and some Valium.

"I just woke up in extreme pain," she said.

"I got up probably too quick and when I got up I just felt so dizzy ... there was fresh blood everywhere, all over the lounge, all over my nightie."

She said she misjudged the lounge, falling to the ground.

"That's when I started to panic."

Mr Russell, who advised her to not take Nurofen anymore and remove her stomach compression bandage, removed some of the stitches days later and replaced them with steri strips.

The woman visited a medical centre when the wound continued to cause pain.

The court heard when a registered nurse friend saw her stomach, the friend said: "What have you done?"

The woman eventually underwent corrective surgery at a hospital where she was hesitant to tell staff who performed the procedure for fear of getting Mr Russell into trouble.

The woman met up with Mr Russell, who she claimed insisted he "could have fixed it" and commented that "doctors don't know what they're on about".

She alleged Mr Russell made a disparaging comment about the awkward way she was walking and stated he "didn't care" about his shop when she told him she could have taken the matter further.

She was refunded the cost of the procedure.

The woman said before the modification, she asked Mr Russell why he didn't pursue medical qualifications and he explained he didn't have "the patience" to learn.

He reassured the woman she "wouldn't have anything to worry about" and claimed a surgeon once told him his local anaesthetic method was "amazing".

The trial, before Judge Helen Syme without a jury, will continue on Tuesday and is expected to run for two weeks.