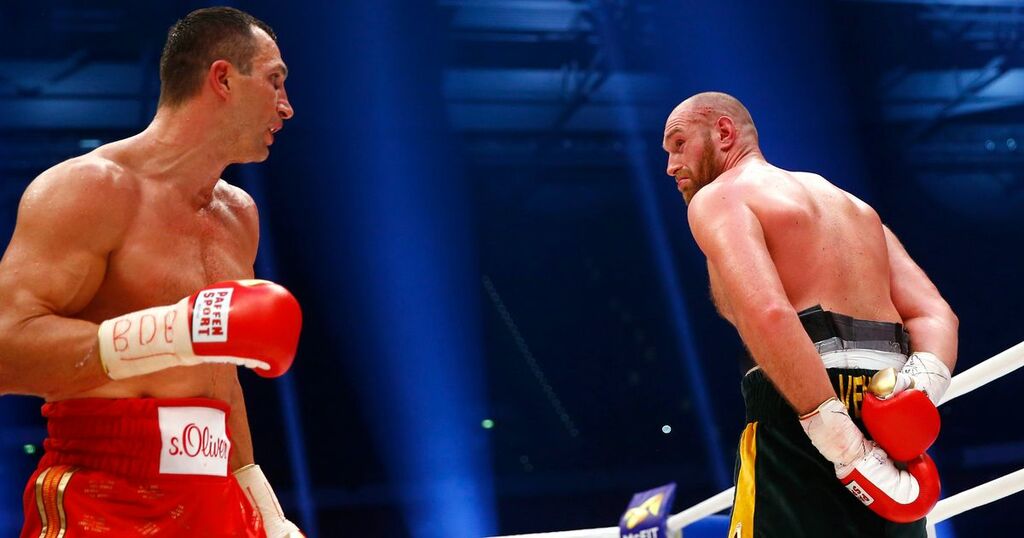 Wladimir Klitshcko has reminded Tyson Fury that he tested positive for a banned substance after he accused Oleksandr Usyk of taking steroids.

The former unified world heavyweight champion lost his titles to Fury in 2015 after a heated rivalry, and while a rematch was contractually obligated, it never materialised after Fury was forced to pull out with an ankle injury.

Fury and Klitshcko's rivalry continued even after their fight, which the Brit won by unanimous decision in Duesseldorf, and it has now returned with the former champion slamming Fury over a comment he made of Oleksandr Usyk.

Yesterday, Fury mocked Anthony Joshua for losing the same belts that he beat Klitshcko for back to a Ukrainian, and said that former undisputed cruiserweight champion Usyk was a "steroid man".

"You know what I can't believe?" Fury asked in a social media video filmed during a workout.

"That AJ has has gone and given Ukraine all the heavyweight belts back after all my hard work in stealing them, you big useless dosser.

"You let a little steroid man come up from middleweight and set about you and take all your belts.

"Now it is going to take a real British Lancaster Bomber like me to go and relieve the little 'sted head' of the belts and bring them back to Britain!

"I'll relieve them of the belts again."

Usyk has never tested positive for any banned substances during his professional or amateur career, and has only ever fought at cruiserweight or heavyweight as a professional.

But Klitschko has noted that Fury "should not throw stones from his glass house", after he failed a test for nandrolone, a banned anabolic steroid.

" Tyson Fury you live in a glass house, and someone needs to take away your stones," Klitschko tweeted.

"Wasn’t long ago before our fight where you actually tested positive. Anyone can Google it. Keep it classy!!! #usykchampion #ukraine #hypocrite."

Fury clapped back by mocking Klitshcko for losing their fight, saying: "Pity that someone can't be you as you couldn't even land a shot in 12 rounds bum.

"Now grandad, time has taken you away! You and Usyk together could never beat a man like me! #GypsyKing."

He then added: "Wladimir you've got some cheek to come back after all these years and open your big mouth.

"You never landed a punch; I took all your belts off you. These used to belong to you, now they belong to me you useless dosser... keep on dreaming."

Who wins in an undisputed title fight, Tyson Fury or Oleksandr Usyk? Let us know your thoughts in the comments section below!

In June 2016, with Fury just weeks out from a scheduled rematch with Klitschko in Manchester, UK Anti-Doping suspended him due to an adverse finding.

UKAD claimed both Fury and his cousin Hughie had returned samples with elevated levels of nandrolone metabolites after their fights in February 2015 against Christian Hammer and Andriy Rudenko respectively.

After a lengthy legal dispute with UKAD, a deal was reached where both fighters were handed backdated two-year bans for an anti-doping rule violation involving Nandrolone, but the wins still stand in their records.

Fury has vehemently denied allegations of wrongdoing, claiming the failed tests were due to eating wild boar meat.

“I’m a fighting man through and through," Fury said in a statement after the issue was settled. "I’ve never backed down from anyone in my life and I was certainly not going to back down from fighting this dispute.

“Hughie and I have maintained our innocence from day one and we’re now happy that it has finally been settled with UKAD and that we can move forward knowing that we’ll not be labelled drug cheats.

“I can now put the nightmare of the last two years behind me, which has been particularly hard on my family."

Usyk has yet to respond to Fury's accusations or Klitschko's latest comments.