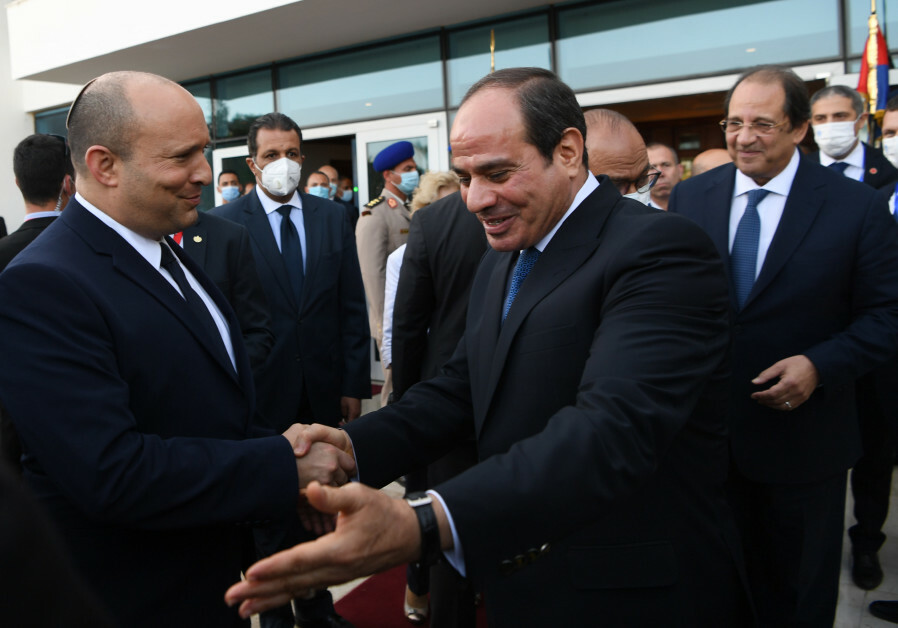 Egyptian President Abdel Fattah al-Sisi’s meeting on Monday with Prime Minister Naftali Bennett sits between Cairo’s effort to resume its pivotal roles in the Israeli-Palestinian conflict in general and the Gaza Strip in particular.

The meeting is also seen by Palestinian and Egyptian political analysts as part of Sisi’s effort to curry favor with the administration of US President Joe Biden.

Sisi is trying to both depict himself as a peacemaker and rid himself of the image of a dictator.

The meeting with Bennett enables him to show the world that no progress can be achieved toward security, stability and peace in the Middle East without Egypt.

Over the past few months, Cairo has stepped up its efforts to end the crisis in the Gaza Strip, especially after May’s war between Israel and Hamas.

The 11-day war ended with an Egyptian-brokered truce agreement, which Sisi is hoping to maintain and turn into a long-term ceasefire.

The Egyptian president has pledged $500 million toward the reconstruction of the Gaza Strip. He has also dispatched Egyptian engineers, construction experts and workers to the Hamas-ruled coastal enclave to help remove the rubble of buildings that were destroyed during the fighting.

Sisi’s sudden interest in the Gaza Strip is attributed to his desire to maintain a certain degree of control over Hamas, an offshoot of his archrival, the Muslim Brotherhood.

The last thing Sisi wants is for Hamas to join forces with the Muslim Brotherhood, whose leaders have not forgiven him for removing former president Mohamed Morsi from power in 2013.

Sisi is hoping a long-term and comprehensive truce between Israel and Hamas would pave the way for Egyptian companies to participate in the reconstruction effort of the Gaza Strip, a move that would definitely benefit the Egyptian economy.

In addition to being a peacemaker, Sisi wants to become the builder of the Gaza Strip, a move that would bolster his standing among Palestinians and many other Arabs and Muslims.

He is also hoping that increased Egyptian presence in the Gaza Strip and improved relations with Hamas would help Egypt fight the Islamist terrorists in Sinai.

Egyptian security officials have accused Hamas of collaborating with the jihadists who are waging a massive terrorist campaign against Egyptian security forces in the Sinai. In recent months, however, relations between Cairo and Hamas have significantly improved.

Sisi has reached the conclusion that the Palestinian Authority, headed by President Mahmoud Abbas, will not return to the Gaza Strip in the foreseeable future.

This conclusion is based on several meetings and discussions between the two leaders, as well as other Egyptian officials, including Kamel Abbas, director of the Egyptian General Intelligence Directorate.

With the PA out of the picture, Sisi knows the key to reaching any deal regarding the Gaza Strip lies in Israeli hands.

The Egyptians know Abbas has no leverage with Hamas and that he is extremely anxious to return to the coastal enclave. They also know Abbas cannot play any role in a prisoner-exchange agreement between Hamas and Israel.

Sisi sees the last ceasefire he helped broker between them as a significant achievement that restores Cairo’s role as a major player in the Israeli-Palestinian conflict.

His next mission is a prisoner swap and a long-term truce between Israel and Hamas.

Sisi knows if he succeeds with these two tasks, the international community, specifically the Biden administration, would no longer be able to ignore his role as one of the most influential leaders in the region and the Arab world.

Once he secures a deal on the Gaza Strip and brings Hamas under his control, Sisi has said he wants to assist in reviving the stalled Israeli-Palestinian peace talks. Again, the move aims to show the Biden administration that the path to the negotiating table passes through Cairo and not any other Arab capital or even Washington.

In this regard, Sisi is coordinating his efforts closely with Abbas and Jordan’s King Abdullah, who has also signaled his desire to see the Israelis and Palestinians return to the negotiating table.

The Jordanian monarch wants the negotiations to result in a two-state solution so that talk about turning Jordan into the future homeland of the Palestinians would be buried for good.

In addition to presenting himself as a peacemaker in the Middle East conflict, Sisi also is working to improve his abysmal human-rights record.

On the eve of the meeting with Bennett, the Egyptian president praised the role of civil-society organizations as “key and important in enhancing and protecting human rights at the political, economic and social levels.”

The announcement aims to send a message to the Biden administration and the rest of the international community that Sisi is not only working hard to achieve peace between Israel and the Palestinians, but is also seeking to spread awareness of human rights and the need to protect personal freedoms, freedom of expression and the right to form civil-society organizations in Egypt.