Will fight on behalf of people: Bandi Sanjay 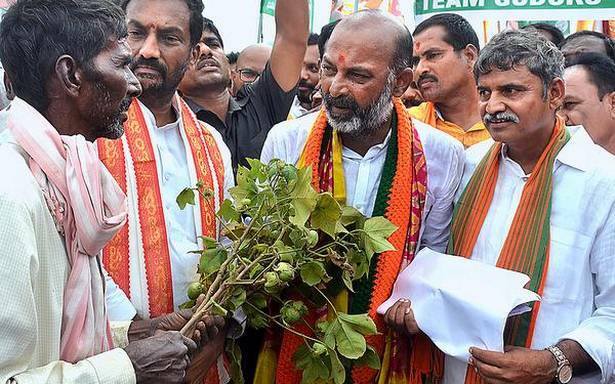 BJP State unit president Bandi Sanjay has promised people to fight the government on the problems being faced by them. During his 11th day of padayatra from Sadashivpet to Sangareddy on Tuesday, Mr. Sanjay interacted with farmers of Saidapur tanda in Sadashivpet mandal who alleged that pattas were not being issued to them despite having their lands in their name. They informed the BJP leader that lands had been cultivated by them for generations.

People said: “This government is harassing us by not giving us new passbooks even though we have title deeds and passbooks for our land, which has been cultivated for 200 years.” Cotton crops lost due to heavy rains, the farmers said and urged Mr. Sanjay Kumar to bring pressure on the government to come to their rescue.

People from different communities and professions met Mr. Sanjay and explained to him their problems. He assured Saidapur residents that the BJP team would soon visit the village and, if necessary, formulate an action plan to resolve their issues.

From there the BJP cadre moved in large numbers along the way and gave a solid welcome to Mr Bandi Sanjay who visited the Mastan Ismail Mahaboob Nursery and asked Ismail about the problems.

Locals complained to Mr Sanjay that despite numerous representations on the service road along the NH at Peddapuram village in Medak district, the problem had not been resolved so far. Mr Sanjay assured them that the BJP would work hard to resolve the issues. After a short distance, some farmers brought cotton plants and demanded compensation for the damage caused by unseasonal rains. They were assured that the BJP would stand by them.