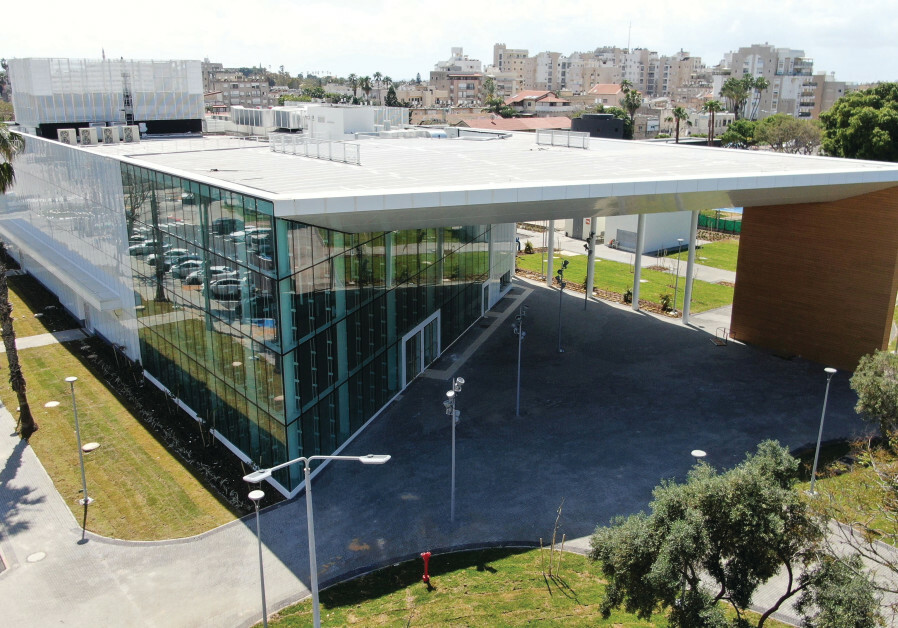 Three months after the May riots which erupted across the country and shattered the delicate coexistence between Arab and Jewish residents in several mixed cities, among them Acre, the city opened a brand-new culture center in August.

Open since then, the brand-new 600 seat Acre culture center already hosted the Arabesque Festival of Classical Arabic and Andalusian Music. A planned cooperation with the Rimon School of Music means the center will serve as the northern offshoot of the Ramat Hasharon school, offering musical education to residents. The center will also offer comedy shows, music concerts and theater performances in the near future.

The center is a stone’s throw from city hall. Walking its corridors, I noticed pictures of Shadhuliyya Sufis dance and of Rabbi Yitzhak Kaduri, a Baghdad-born scholar of Jewish mysticism whose multi-volume writing on amulets was printed posthumously.

Acre Mayor Shimon Lankri pointed to “the blessing” of having faith in such spiritual figures while discussing scholarships offered to all city residents, no matter their faith, who pursue higher education.

Referring to an inflammatory 2015 speech by painter Yair Garbuz who criticized people who “kiss amulets, worship idols” and referred to them as “a handful,” Lankri, a Likud member, said how offensive he found Garbuz’s words and lauded the value of shared respect of tradition.

“Me and Deputy Mayor Adham Jamal [Islamic Movement] both pray, he prays to his god and I pray to mine,” he said.

Acre has two deputy mayors; the second is Zeev Noyman [Yisrael Beytenu]. Three years ago, the city erected a monument honoring the memory of Soviet Jews murdered during the Great Purge, the only city in the country to do so. Lankri also inaugurated Justice for All square in 2013 honoring Amos Barnes, a city resident falsely convicted of a murder.

This extremely fair and tolerant attitude did not prevent the May riots.

They began at Canon Square near the Old City, a UNESCO World Heritage site that presents the underground Crusader city and the aboveground splendor of the Ottoman one. The riots eventually claimed the life of former director-general of the Israel Space Agency, Aby Har Even. Even was fatally injured when the Efendi Hotel was torched.

The Efendi is a boutique hotel owned by Ori Yarmias, an established figure in the Acre culinary scene since the late 1990s. Ohio-born translator Evan Fallenberg also suffered a mob burning and looting the Arabesque Arts and Residency Center, which he owns. Six new boutique hotels are currently planned at the same street, I was informed.

As mayor, Lankri oversaw a massive change. “Acre had a negative image as a place unfit to live in,” he told me, “today it is a clean city filled with parks.”

He presented figures that claim during his 18-years in office the rate of Jewish and Arab residents (70% and 30% respectively) did not budge, meaning those who speak about a Jewish influx that topples the Jewish-Arab applecart are wrong. The policy in Acre was “city hall bridges the gap between parents,” he said. If poor families cannot afford musical instruments to send their kids to music classes, the city will cover it; same for tennis rackets or fencing masks. The city also renovated 400 buildings and charges residents a monthly maintenance fee of NIS 17, he added.

The riots shocked Lankri. “I did not think this could happen here,” he said. “An evil wind is blowing between Arabs and Jews in the State of Israel. The Acre model was unique, then the riots happened.”

Before COVID-19 struck, roughly two million people visited the Old City of Acre every year, Head of Acre Tourism department Daniel Arama told me. The only kosher restaurant in the city, Roots, is co-owned by Jews and Arabs. Chef Uri Arnold, Monas Khuri and Samer Sayed opened it three years ago. Offering a Levantine menu, Arnold created fantastic tofu and soy-based yogurts which allow observant patrons to dip kebab in parve “yogurt” or sample a coconut-based Labneh cheese during a meal. A few steps from the Crusaders City, Roots offers visitors excellent value for money before entering the colorful past. To answer the current shortage of waiters and chambermaids Acre will offer residents free training courses, I was told.

The nearly 1,000-year old Crusader-built walls now carry signs in Chinese and admission was lowered to NIS 40 per ticket to encourage people to visit. Richard the Lionheart, Tancred and Konrad von Feuchtwangen all were here. Splendid animated movies depict the complex reality of the Crusader Kingdom as visitors walk its actual streets. This unique blend of historical texts and real-world findings cast a spell on the Israeli mind for decades.

Poet Dahlia Ravikovitch published “Horns of Hattin” in 1969. “How cruel and naive were the Crusaders” she wrote, “they robbed everything.” Ala Hlehel, an Acre resident, published the 2014 Arabic novel Au Revoir Acre about the French failure to capture the city. The work, translated into Hebrew in 2018, includes the historical character of Haim Farhi. A Jewish adviser who served Jazzar Pasha in his war against Napoleon. “When Napoleon conquers Acre you will be mine,” sings the Hebrew rock band Habiluim about a doomed love affair.

FOR ALEXANDER, a Russian tourist visiting with his family, the Turkiz restaurant defeated the French single-handed. “I am not joking”, he said, “this is the best place I had eaten at in all my life.”

“Everybody in the world must taste the knafeh here”, he said.

“He told me he wants to come live here just so he could eat the food daily,” owner Samir Asad said. Attara from Kfar Saba stepped over to heap more praise.

“Everything here is clean and tip top,” she said, “we had outstanding, amazing Arab food.” Arama, who accompanied me during this visit, beamed. “I invite my guests with all my heart,” Asad told me, “when I make the food, I make it with love.”

With so much blessing and love, what happened?

It was suggested to me that strongmen seeking protection fees did. Allegedly, business owners who coughed up were not touched. Nobody agreed to discuss gentrification. The possibility some Arab residents are not happy with boutique hotels opening around them. Not to mention future careers as waiters and chambermaids. Had been tossed aside when I brought it up.

That too is an ongoing pain in Jewish-Arab relations. Well-meaning Jews taken by surprise when the wealth they bring is rejected by Arabs who, to quote Mahmoud Darwish, tell the Jews to “Get out of everything, out of our wounds, our lands/… and take your dead with you.”

Albert Ben-Shloosh, CEO of the Acre Economic Company, met me at the culture center to discuss the Arabesque Festival, of which he also serves as CEO. “The more we invest in culture, knowing the cultures of others, the better,” he said.

Rabbi Ovadia Yosef, he argued, ruled that it is permissible to use Arab music in Jewish prayers as “all things that raise the soul to a higher level are kosher” [Yachve Daat].

Painter Gershon Knispel has a large-scale oil painting titled Signing the 1953 Peace Declaration in Acre. A joint effort by Kibbutz Ein HaMifratz and Kfar Masaryk members who asked local Arabs at the market to sign it.

I would suggest asking the Tel Aviv Museum of Art, who purchased the work for its collection, to lend it to the new culture center. Knispel himself pointed to a character on its left side, a day-worker who glances at the peace-building effort while carrying his load, and remarked the man must be thinking hauling bricks easier than attaining peace. Garbuz, perhaps, could discuss Knispel and his works.

The author was a guest of Acre City Hall.

The Shadhuliyya Sufis have been active in Acre since 1850 and their center, Zawiyat El-Shadhuliyya A Zawiya, is open for prearranged visits. Phone 04-9910193 to learn more. English speakers can book a Sufi tour in Acre with Wissam via the Acre city site: https://www.akko.org.il/local/meet-wisam/. The Efendi Hotel site https://www.efendi-hotel.co.il/. Arabesque Hotel site: https://www.arabesqueinacre.com/en. Old Acre Phone 04-9956708 Email info@akko.org.il. Roots Phone 04-8848040 Site (in Hebrew) https://roots.rest.co.il/. Turkiz Acre is at Julius Cesar St Phone 04-6021200 open daily except on Mondays. Site (Hebrew only): https://turkiz-acre.business.site/. Adir Miller will inaugurate the new culture center on September 13 at 9 p.m. (one hour long stand-up show, Hebrew only, tickets range from NIS 129 to NIS 99). Future theater, music and large-scale events are planned during 2022, including Avraham Fried (NIS 99 per ticket for Acre residents on February 22) and a theater adaptation of All the Rivers by Dorit Rainyan (May 21 at 9 p.m.).