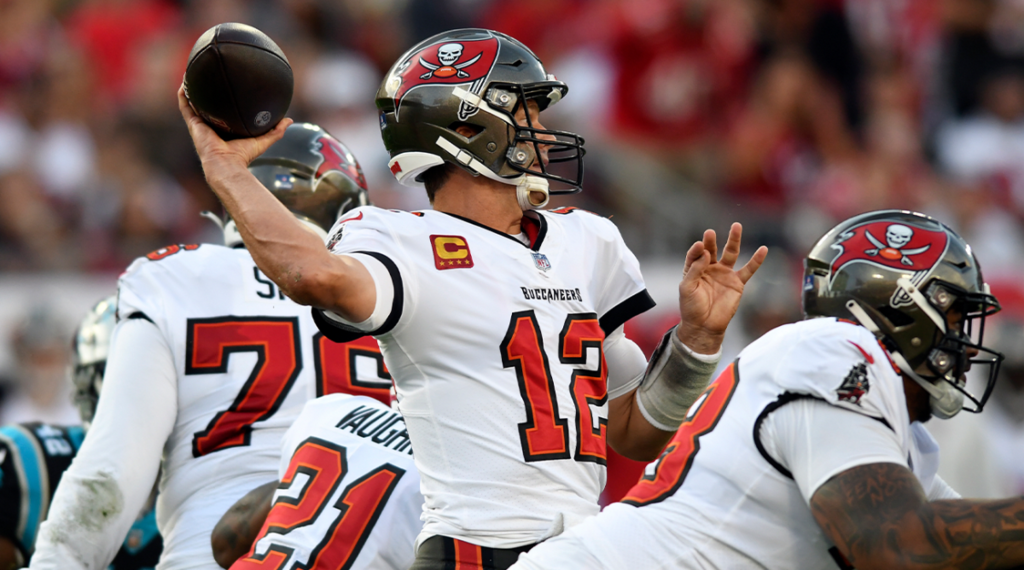 No. 7 Philadelphia, who finished in second place in the NFC East with a 9-8 straight-up (SU) record, did not turn a profit for bettors after posting a pedestrian 8-8-1 against the spread (ATS) mark. The Eagles, who are 6-3 SU and 5-4 ATS on the road, will look to get revenge in the second matchup this season. Back in Week 6, Philadelphia lost to Tampa, 28-22, as 7-point home underdogs.

Tampa Bay earned the No. 2 seed in the NFC after seeing several outcomes break their way in Week 18. The Buccaneers, who finished tied with Green Bay with the best overall record in the NFL with a 13-4 SU record, were only slightly profitable for NFL bettors with a 9-8 ATS mark.

Tampa Bay heads into the postseason having won seven of their last eight games despite losing several key offensive players. Chris Godwin was lost for the season in Week 15 with a torn ACL against the Saints. Two weeks ago, Antonio Brown quit the team during the team’s game against the Jets. If any club can still find a way to win, despite losing key offensive weapons, it’s a squad led by Tom Brady.

The question for bettors is easy: Are you willing to lay the second-biggest spread on the board for the opening round or fade the G.O.A.T in the playoffs? In his prestigious career, Brady has 34 playoff wins. Let’s put that number in historical perspective.

The line continues to rise off the opener of a 7-point demand in favor of Tampa Bay (13-4 SU; 9-8 ATS) over Philadelphia (9-8 SU; 8-8-1 ATS) to a line now displaying the Buccaneers as 8.5-point home favorites at SI Sportsbook. The game total, following both public and respected money, has fallen several points backing a low scoring game than oddsmakers are predicting. The total which opened at 49.5 has dropped to 46 following the strong stream backing the under thanks to early weather reports predicting rain and strong winds in the forecast.

The Eagles, who are 6-2 SU over their last eight games, will face a Tampa Bay squad that is 6-2 ATS at home this season. Philadelphia, led by the legs and arm of Jalen Hurts, owns the NFL’s best rushing offense (159.7 rushing yards per game), but will now face a Tampa Bay defense that surrendered the third-fewest (92.5) rushing yards per game in the regular season. Hurts, in addition to throwing for 3,144 passing yards and 16 touchdowns, also led the club in both rushing yards (784) as well as rushing touchdowns (10). In fact, the sophomore signal caller led all NFL quarterbacks in both rushing yards and rushing touchdowns.

Philadelphia is hopeful that running back Miles Sanders, who finished second on the team with 754 rushing yards, will be able to return from a hand injury that has forced him to miss the last two games. If Sanders is unable to suit up, expect the Eagles to feature Boston Scott and Kenneth Gainwell in the backfield.

In the passing attack, rookie wideout DeVonta Smith and dangerous pass-catching tight end Dallas Goedert are the club’s top weapons. Smith, who led the club in receptions (64) and receiving yards (916), has produced consistent production down the stretch posting 40-plus receiving yards in seven of the last nine games. Goedert has become an integral part of the offense over the last four weeks, recording 21 receptions and 339 receiving yards and two touchdowns.

On the other side of the ball, Brady pilots an explosive offensive attack that ranks second in scoring averaging 30.1 points per game. Brady, who led the NFL in passing yards (5,316) and passing touchdowns (43), will face an Eagles defense that ranks 18th in scoring allowing 22.6 points per game. The phenomenal veteran has thrown for 300-plus yards in five of his last eight games despite missing Mike Evans, Godwin and Brown for many of those games. In the first matchup, Brady threw for 297 passing yards and two touchdowns.

Tampa Bay, who will be without Godwin and Brown, will be depending on strong production from wideout Evans as well as Rob Gronkowsi in the passing game. Evans, who finished second among all wideouts in receiving touchdowns (14), has stepped up in the last two weeks since returning from a hamstring injury with 10 receptions and three touchdowns.

On the ground, it is expected that the Buccaneers will be without running Ronald Jones (ankle). The fourth-year back has been starting in place of Leornard Fournette (hamstring) since Week 15. However, the team is optimistic that Fournette will be able to return just when the club needs him most. Last season, the talented veteran was instrumental in the club’s run to a Super Bowl victory. In the first matchup between the two clubs in Week 6, the powerful Fournette ran for a game-high 81 rushing yards and two touchdowns while adding six receptions for 46 yards in the passing game.

If heavy rain and wind hits the Tampa area Sunday afternoon, bettors will likely find a game featuring a high volume of short passes - which would lead to strong value in Fournette’s receptions markets. The former LSU standout became a reliable target for Brady in the passing game, finishing third among all NFL running backs in receptions (69).

Tampa Bay has several strong trends in their favor heading into this contest. First, the Buccaneers are 6-1 ATS in their seven games at home. In addition, Tom Brady is 23-7 in his career at home in the playoffs. However, the weather and the likelihood of strong running volume makes the game total the target of respected money in Las Vegas.

Get fantasy and betting analysis in your inbox by signing up for the Winners Club newsletter.

Frankie Taddeo is a successful high-stakes fantasy football player who created the first-ever DFS program ever offered in a Las Vegas sportsbook. Frankie is SI Betting's Senior Analyst and provides his significant experience and resources in the sports betting scene. You can follow Frankie on Twitter @Frankie_Fantasy for his latest betting and fantasy insights from Las Vegas.