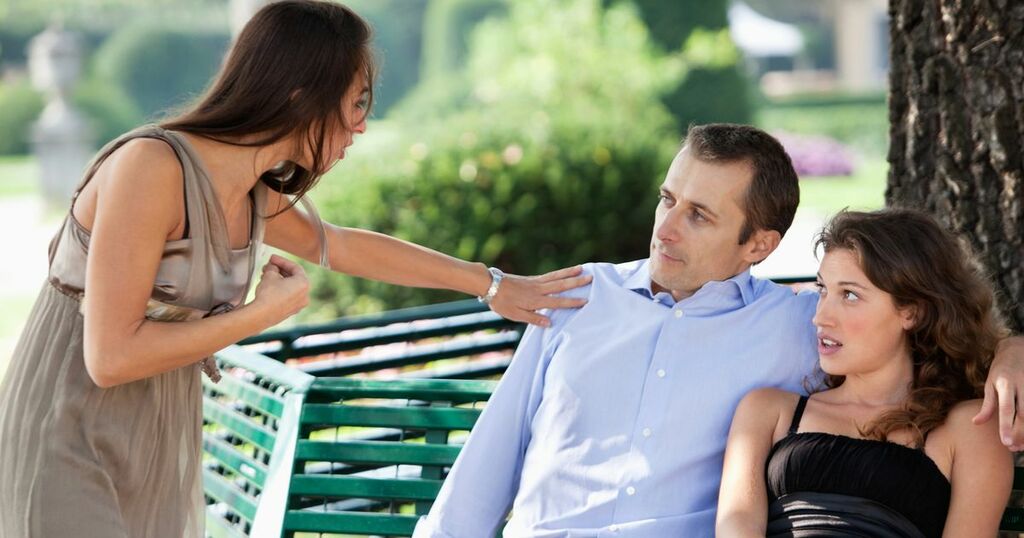 The old adage goes that 'a picture is worth a thousand words' and - as many a devastated lover has learned over the years - sometimes these words can hurt more than any which are spoken out loud.

Scrolling through pictures from her husband's work Christmas party on Instagram, a woman, who wishes to be known only as Annie, was left shocked and horrified by a snap that showed her other half "in close quarters" with a female co-worker.

The husband appears to be "very content and even aroused" in the photograph while, in Annie's words the woman's face, "is like the cat finally got the cream".

Annie has understandably been left hurt and confused by what the picture suggests and doesn't know where to turn next.

Speaking with The Mirror, she said: "The photo shows my husband and this woman standing very close together. Basically, there is no space between them. She is standing at a slight angle with her arm and breast touching my man's arm, but it’s the looks on their faces that really takes the biscuit".

Annie, who has been married to her husband for 21 years, knows of the woman in question, but 'not personally' and decided to confront her husband about the photograph.

She continued: "I confronted him because the 'team' has put them on Instagram and I was furious to discover them this way. He said he should have moved away and not been in that picture at all and that he is sorry and it won’t happen again but the trust is gone.

"I don’t trust him anymore, I gave him everything. Two beautiful grown-up children, money, status, a home, loyalty. I don’t believe I deserve this. I’m heartbroken".

Commenting on Annie's difficult but all too common situation, clinical sexologist Ness Cooper - who has a background in sex and relationship coaching, therapy, and education - remarked that "it can be easy to jump to conclusions when we spot a photo of our partner with another".

Offering advice to anyone who may be experiencing similar issues, Cooper suggested that "taking a moment and asking them about it can be a way to clear things up quickly".

She continued: "When communicating your concerns regarding the photo, try and avoid accusatory language and statements and give your partner a moment to explain things. If you’re struggling to get through the conversation, take a few breather breaks and come back to it. Sometimes spacing out the conversation can help avoid things exploding into arguments".

Should you choose to take breaks from what can be a very tricky discussion, Cooper advises arranging a moment to return to it, acknowledging that "it can be easy to avoid coming back to it and sweeping it under the rug where it can fester rather than be forgotten".

Cooper also reminds readers to remember that "it’s ok for our partners to have other forms of close relationships and the ones they have at work may look different to the ones you see them having outside of it".

For those wanting a clearer understanding of their partner's work friendships, she has advised regularly asking about how their working day went, making sure to "include names of their work colleges into the conversation to show you are paying attention and don’t just focus on the names of those you have concerns about".

Cooper explained: "this will help you feel more of a part of your partner's day-to-day life at work and will help you get to know them better. Remember not all close relationships are romantic!"

However, those who still harbour doubts even after having a conversation with their partner could well find it helpful to seek external support from a relationship therapist or coach.

Cooper said: "It can be very easy to fixate on these things even when presented with the evidence, and you may find you both need to focus on building trusting and bonding more to keep the relationship dynamic healthy".

According to the expert, it's also important to remember that photographs taken at special occasions such as Christmas parties "can often feel a bit closer than at other times of the year".

The celebratory atmosphere, especially when mixed with plenty of alcohol, "can reduce some standard boundaries such as understanding of personal space", potentially resulting in photos such as the one Annie is so worried about.

Offering some reassurance, Cooper added: "Being a bit close in a photo doesn’t always result in disloyalty and may be just that everyone at the party were giddy from Christmas cheer and spirit".